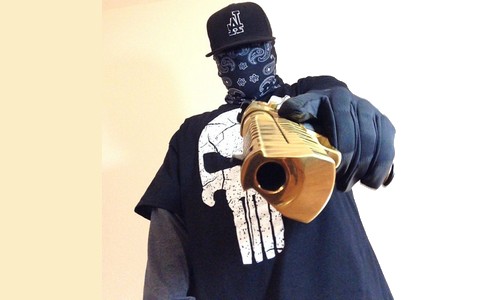 <![CDATA[ <p>Remember the scene in “The Dark Knight” where the inmates in a boat hold the life of several citizens (who are on a second boat) in their hands, in the form of a switch which will cause a bomb on the other boat to explode? They end up deciding not to go on with it, and the citizens do the same. These kind of “Good Samaritans” are seen only on the big screens and Television, right? Let’s take a look at some real life instances when the villains ended up doing good deeds.

1. Burglar turns physician to save a baby Mrs. Morris proceeded to hurry out of Los Angeles home after finding out that her baby was stricken with croup. As she headed towards the main door, she was horrified to see a gun wielding masked man on the front porch. He threatened her with the gun, asking her to keep quiet. Already in a panicked state, she pleaded with him that she needs to find a physician for her a baby immediately.

What happened next is something feel-good stories are made of. The robber told her not to worry, put the gun into his pocket and asked her to bring some vinegar, sugar and water. He concocted a mixture and forced it down her baby’s chest. He remained by the baby’s side for an hour, before assuring Mrs. Morris that her baby was now okay.

When asked whether he has any kids, he replied by saying that he had five, the reason why he was there, and then he left. Mrs. Morris refused to provide a description to the police.

2. Prisoners save guard from rape by fellow inmate Raleek Young, an inmate at Rikers Island would have ruined the life of a prison guard, had it not been for the heroics of some fellow inmates.

Young, serving a 10-year sentence for raping a 13-year old girl in 2007, hauled the officer into a bathroom, blocking her way towards the security door. The inmates assisted the responding officers break into the bubble like watch post, The inmates took down and held the accused until other officers arrived at the scene.

Franklin Johnson, one of the inmates who saved the day, is a convicted drug offender. “We don’t violate women. That doesn’t fly,” Johnson said. Here’s hoping this daring act doesn’t go unnoticed by the higher ups at Rikers Island.

3. The Nazi soldier who saved hundreds of Jews from deportation Yisrael Fruman is an 84-year old survivor, who still has the photo of Gerhard Kurzbach-the man who saved his life-hung on his wall.

Fruman recalls the events of August 1942, when Kurzbach rounded up the Jews of Bochnia Ghetto for deportation, screaming at them at the top of his lungs. They soon realized that it was a ploy when Kurzbach hid them in his workshop instead of dumping them at the gates of the camp. Fruman and his sister were the only members of his family to survive, his parents and brothers having been murdered in the camps. They heard fleeting rumors that Kurzback was court-martialed and shot.

4. Thief pickpockets drunk man, only to save his life moments later A surveillance footage released by French police went viral on Youtube, garnering 5 million views. The video shows a thief approaching a man sitting on a bench and removing a phone from the victim’s pocket, who seemed to be drunk. He then proceeded to pick the victim’s other pocket and left the scene.

Moments later, the victim is seen sleepwalking and falling onto the tracks while a train arrives at the station. A bystander simply watches for a while before walking away. Suddenly the thief sprits along the platform, rescues the drunk man moments before the train takes off, and pulls him to safety.

It is unclear if the thief was caught but this dramatic footage of a “law abiding citizen’ refusing to help a man in peril, while a thief being humane enough to save him, has sparked a philosophical debate online.

5. Inmates save guard from violent attack by fellow prisoner 4 prisoners at the Orient Road Jail in Florida made headlines after saving a lone guard from another inmate.

Deputy Ken Moon was violently put in a choke hold by Douglas Burden, who was booked for drug trafficking. Help came in an unexpected fashion as inmates Jerry Dieguez (charged with armed home invasion), David Schofield (battery), Hoang Vu (attempted murder) and Terrell Carswel (robbery) overpowered Burden and called for help while keeping him away from Moon. The efforts of the 4 men were greeted with letters of thanks to their attorneys.

When asked why they helped Moon, the answer was: Moon is a good guy and they like him. A robber ended up showing his good side while ransacking an ATM machine in Sao Paulo. Two robbers rigged the machine and emptied the cash register, quickly getting away from the ATM which was about to blow up.

Suddenly, one of the robbers saw a homeless man walking past the machine. He came running back, grabbed the man and dragged him out of the blast radius, moments before the bomb went off. He then proceeded to do their thing and flee the scene. Straight out of a Robin Hood comic book page!

7. Burglar helps police catch paedophile before turning himself in Just another day in the life of a burglar- pick a house, break in and do his thing. Only this time, he discovered something he wasn’t used to seeing during his ‘outings’- several videotapes containing graphic footage of child abuse.

The burglar, apparently a movie buff, took the video tape collection along with other electrical appliances. He was horrified when he played those tapes at his residence. He put the tapes in a bag, placed them under a parked car, and used a payphone to inform the police about his discovery. The bag was retrieved and police found a note inside it with the address of the accused (the paedophile, if you are slow) and a note requesting them to catch him.

The man they arrested was a local football coach who had sexually abused 4 of his players, including a 16-year old. The police didn’t find the burglar, and deemed him “the thief with a conscience”.

8. Prison inmates save 3 kids from drowning Larry Bohn and Nelson Pettis, 2 inmates of Larch Corrections Center, Washington, were doing supervised maintenance beside the facility when they saw two heads bobbing in the waters of Salmon Creek. Sensing danger, they rushed immediately and jumped into the icy cold water to save the boys. The current was estimated to be 25-30 mph at the time of the incident. After the rescue, both the inmates and the 3 boys, aged 8, 10 and 16 respectively, were rushed to the hospital and treated for mild hypothermia. (people.com).

Despite this daring act, the inmates didn’t consider themselves as heroes, saying that they just did what any good person would have done. Bobby Butler, a parolee with 9 previous convictions, died a hero’s death trying to save a woman being robbed by a mugger at gunpoint. Butler saw the convict pointing a gun at the woman, demanding her purse on a deserted street. He approached the scene, yelling the man to stop, when the panicked mugger shot him in the abdomen, before fleeing with the purse. Butler was declared dead 2 hours later at a hospital. (cbsnews.com)

Despite being a villain all his life, with convictions for theft, drug dealing and armed violence, Butler left the world, a hero.

10. Inmates break out of cell to save guard having heart attack 8 prison inmates at Parker County Jail, Rutherford, sprang into action as they saw a guard collapsing on the ground. The guard supposedly had a heart attack and the inmates quickly rushed to his aid, grabbing his radio and calling for help. He had stopped breathing and they couldn’t find a pulse on him. The inmates’ collective efforts came to fruition as help arrived in the form of deputies, who performed CPR before the arrival of paramedics, who used a defibrillator to shock his heart.

The guard was saved and returned to duty within a week. Captain Arnett, one of the officers at Parker County, praised the inmates for their efforts stating that they definitely saved the guard’s life. (telegraph.co.uk).