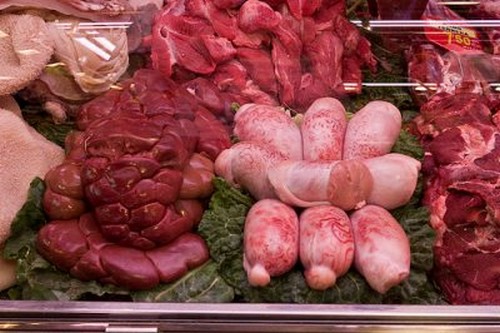 <![CDATA[ <p>Food has been an important part of all cultures around the world. Based on the produce available in different parts of the world, people of different cultures have developed their own taste and flavour. There are the special dishes that are capable of bringing out the true flavor of the traditional food. It all sounds perfectly lovely, until the host of delicacies come up which are, to put it gently, quite disgusting. Let us take a look at 10 of the world’s most disgusting delicacies. When served, it looks like an innocent hard-boiled egg. It’s only when you break it that you get the embryo of a foetal duck, with tiny bones, feathers, beak, etc., all soft-boiled whole inside the shell, as your surprise. It is a street food available in Vietnam and Philippines and is an ethnic delicacy. It is fertilized duck egg, incubated or allowed to grow in vitro for a few weeks. This is done in the warmth of the sunlight, and the egg is held up against the light to check if it ready to be served. The right way to ‘enjoy’ it is to slurp it from the shell with a pinch of salt and squirts of lemon juice. We eat meat, and forget that this meat has come off a being that once had a head, body and tail. But, the Pacha changes that. On your plate sits a whole sheep’s head, and the real beauty is not that you’re eating a face, but that the facial bones get revealed as you do so. The eyeballs and the tongue are there, of course, while one might get the surprise treat of the brain inside. The dish is from Iraq, but recipes of sheep’s head soup and their smoked versions are traditional in Mediterranean and Northern Europe. Known as Smalahove in Norway, it is a Christmas specialty served with potatoes. Asians and their penchant for gastronomic adventures is known throughout the world. One of the most adventurous culinary delights from Korea, the Sannakji, is a variety of ‘hoe’ or raw dish. This variety of hoe serves baby octopus. They are either served whole or in pieces, seasoned lightly with sesame and sesame oil, but the essential part is that they sit squirming and wriggling on the plate. The suction cups on the arm pieces have been reported to be still active and stick to the mouth and throat. Several incidents of choking have also been reported. Milt or soft roe is the genitalia of male fish which contains sperm, and it is considered as a delicacy in many cuisines. Many of them serve fried milt with horseradish. In Russia, herring milt is pickled, and it enjoyed in the UK, too. In Romanian cuisine, the milt of carp pr other fish is known as Lapti and is eaten fried. The Sicilian use tuna milt as a pasta topping and call it Lattume. The Japanese like their milt coming from cod, anglerfish, salmon, squid or pufferfish, and may be served cooked or raw, as a soft, white, slippery winter delicacy called Shirako, which reportedly melts in the mouth like butter. While we are on the subject of milt, let us jump to another popular delicacy, this time from North America. The Rocky Mountain Oyster, or Prairie Oyster has a paradox in its name, and the creator probably thought this joke would lighten the mood after letting the diner know what it actually is. Well, Prairie Oysters are the testicle of bull calves. Pigs or sheep testicles are also used, which are peeled and deep-fried. And just for additional information, penis of bull is also a dish in Northern America, eaten steamed, fried or even raw, white tiger penis is an expensive soup in Asia. The Chinese love eating their animals, even if it is for dessert. That is why they chose the fallopian tubes of frogs and chose to dry them, only to later rehydrate them so that they swell about 10-15 times. These are double-boiled with rock sugar for desired sweetness. The result is a chewy, light and opaque product with a glutinous texture, which is served with tong sui or sweet soup, and a number of other items like jujubes, dried longan fruits, lotus seeds, Chinese pear, snow fungus, etc. It is not easily available, though. Top notch Hong Kong restaurants are known to serve this dessert.

READ ALSO:  How Much Blogs Earn - The Definitive Report 2017 A dish from Thailand, The bat paste is a wonderful work of art, as the procedure involves chucking a whole bat into water and boiling it to softness. Then, it is mashed into a paste with herbs, and just like that, your bat paste is all ready for you. The bat soup of Palau Islands, a United States Associated State, serves the bat whole in the soup, fur and all, and you can enjoy it while the fuzzy little head stares at you. This dish could kill you, or just make you ill, since bats are well known for carrying a whole lot of diseases in their bodies. But then again, this was supposed to be an adventure. Blood is drawn from pigs and allowed to coagulate, which is then mixed with large amounts of oatmeal, or even barley which absorb the blood. It is often flavoured with pennyroyal, and is cooked with limited number of ingredients. It is a popular delicacy in European countries, especially Britain and Ireland. While being cooked, a layer of fat is produced on top. While some people discard it, others like its chewiness. It is formed into a kind of sausage, which is eaten cold without cooking further beyond the process of production, or is grilled, fried, baked or boiled in its skin. The name literally means stinky tofu. Imagine where it starts from: the soya beans. Most people hate it. From them comes the tofu milk. With soya milk is prepared tofu, Apart from the Chinese people or the really health-conscious blokes, no one is really fond of either soya milk, or tofu, because of the taste and smell. Mix it all together and you have this odorous food, prepared by adding fresh tofu to a brine made of fermented milk, vegetable and meat. The brine fermentation can take several months. It is sold in the night markets of China, Taiwan and Southeast Asia. This Sardinian pecorino cheese is also called maggot cheese, and you’ll probably need eye-protection to eat it. A tedious process of fermenting pecorino cheese is followed, and ‘cheese flies’ are introduced into it to make it their breeding ground. When you eat the cheese, the maggots will be jumping – as high as 6 inches – without which it can go toxic. The taste and putrescent flavour will be strong enough to potentially burn your taste-buds. Just so you know: the worms can survive inside your stomach and try to bore through the walls. It is so disgusting that it is illegal.

READ ALSO:  Top 10 Most Beautiful Women in the World 2018-That Drive Men Crazy

Now that you have officially lost the appetite to eat ever again in your entire life, might like to know that there are many more such delicacies which include some very unique ingredients such as bird’s whole nest, larvae of bees, whole insects, cockscomb, tuna eyeball, etc. There are many others, yet, which a weird in the procedure of cooking, like the eggs that are fermented for many years to produce century eggs, the Surströmming which is Baltic Sea herring fermented in shut cans for a year or so, ironically to keep it from rotting, or the Mongolian boodog prepared inside out by cramming every cavity of the body of a goat or marmot with hot stones after hanging it upside down bleed it out. Some boast of both, like in case of Jellied Moose Nose, where the nose of the moose is boiled long enough to disintegrate the hair, and then cooked further to form a gelatinous mass which is sliced and served. There are also several drinks that are as welcoming as these dishes are appetizing.