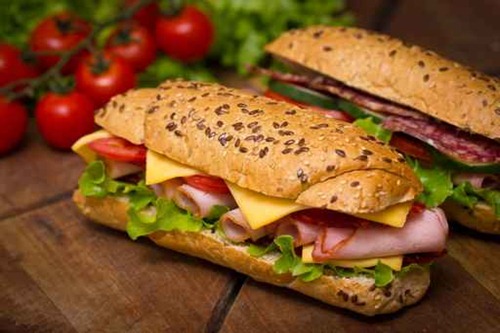 <![CDATA[ <p>When we see new versions of food, we kind of expect that they’re created by genius chefs. But it turns out that some of the most famous foods we eat were born out of revenge plots, laziness to use utensils, and a lack of ingredients. Lucky for some people, their desire to improvise led to some of the greatest discoveriesin culinary history.  From nachos to potato chips, get ready to find out the insanely bizarre creation stories on how randomly mixed ingredients led to the popular meals we know today. Checkout the 10 insanely bizarre food origin stories: Sometimes a bit of creativeness can go a long way. This is exactly what happened to Ruth Wakefield when she created our favorite chocolate chip cookie. One day when making a dessert, she ran out of baker’s chocolate.  Instead of going back to a grocery store and complaining, she decided to improvise. She cut-up a semisweet chocolate bar from Nestle as a substitute. Thus, our chocolate chips were born with one of the most bizarre food origin stories! The tale begins in 1905 in the home of 11-year old Frank Epperson. One night, he made his usual sugary drink—a soda powder combined with water and mixed it with a stirring stick. He accidentally left his drink (with the stirring stick) outside in the middle of winter. The next day, a Popsicle was made! He gave some of his first Popsicle creations to other kids who absolutely loved it. This made Frank realize that the Popsicle would be a hit. He kept this discovery a secret for 18 years until he had the resources to distribute them commercially. One of mankind’s greatest innovations in food history is the sandwich. Apparently it also comes with one of the most bizarre food origin stories. It turns out that the origin story of how this dish is now EVERYWHERE was born out of a man’s laziness to use proper utensils. The story is that sometime in the 1700s the 4th Earl of Sandwich– John Montagu requested it from his servants. How it happened? Well that’s something that people don’t agree on. Some say that he was in the middle of a fierce gambling game so he ordered that meat between two pieces of bread should be brought to him at once. Another story says that the Earl was extremely busy for long periods of time so he requested a utensil-free meal. Whatever the case, we can all agree that the sandwich made getting meals a whole lot easier.

Now in today’s modern world the earl’s sandwich is consumed by fast-paced employees, stressed college students, hungry fast-food consumers and basically EVERYONE. A big thanks to you Earl of Sandwich!

READ ALSO:  Sentinelese - The most isolated tribe in the world virtually untouched by modern civilization According to the book “How the Hot Dog Found its Bun,” there are two origin stories behind this drink and both make for some bizarre food origin stories. The first story tells the tale of Pete Conklin a circus concession worker. One day he ran out of water to make his lemonade with. Instead of calling it a day, he tried to find more water which he found in the dressing room. Problem is somebody just used it to clean their pink stockings giving the bucket of water a pastel pink hue. Ignoring all health concerns, Pete used that pink water to create his alleged “strawberry pink lemonade.” His business skyrocketed because of his new twist to the usually bright yellow drink. Too bad, it’s not refreshing as it seems. The second tale recounts an accidental discovery by Henry Allot another circus-worker. He dropped red cinnamon candies in a glass of lemonade, resulting into the rose-colored lemonade we know today.

But while don’t know which version to believe at least we learned two things: The pink lemonade was invited by circus workers. Don’t drink or eat based on food color. Surely the drink has one of the most bizarre food origin stories. Once upon a time, a customer dined at Saratoga’s springs’ Moon Lakehouse. Like most people he ordered the house specialty– Moon’s Fried potatoes. Chef George Crum gave him exactly what he ordered, but the batch of fried potatoes kept coming back to the kitchen because the customer kept complaining that they were too thick.

Who wouldn’t be upset with an annoying customer who insults your cooking? This led Chef George Crum to cut the last batch of potatoes as thin as possible, fry them to a crisp and add tons of salt. Crum thought that now the chips were surely inedible. Surprisingly, there’s a twist. Once his revenge dish was served the customer took his first bite– AND LOVED IT.  Our potato chips were born! Now you know that every potato chip lover will forever be grateful to the annoying customer and Chef Crum’s unexpected revenge plot. Do you love the feeling of eating spicy food? Then you can definitely recall taking the first bite of sizzling hot chicken: the aggressive spice takes over leaving a sting lingering in your taste buds. From what we know, hot chicken is a definite must-try for those who like it spicy! And Nashville’s Prince’s Hot Chicken restaurant is where it all began, the place of one of the most bizarre food origin stories.

The story dates back to 70 years ago in the home of Thornton Prince an infamous womanizer. After a night of playing with other girls, he found his girlfriend not so pleased about his other affairs. To get revenge, she served him extra spicy chicken for his Sunday morning breakfast. Unfortunately for her, Prince loved his chicken spicy. He created his own recipe and began cooking it at his restaurant. The rest is history. Hot chicken became a hot recipe. As for the Prince men, well they just happened to own the hottest restaurants in Nashville. Guess there can be some pleasure in pain.

READ ALSO:  10 Most Beautiful Mosques in the World When we see nachos in front of our LCD screens we remember the mouth-watering melted cheese, the deliciously gooey garlic cream, the bright green cilantro plus all the pounds of beefy goodness! It’s no doubt that nachos are one of the universe’s greatest inventions. The tale of how this dish came to satisfy our gastronomic pleasures began decades ago in the middle of World War II.

In 1943, a group of American military wives lived together at Eagle Pass, Texas. To avoid seclusion at the military base, they often wandered to nearby towns–one of which was PiedrasNegras in Mexico. One day these women ventured to the Victory Club restaurant. The maître d’ Ignacio “Nacho” Anayawas happy to meet them but unfortunately the chef was away. He didn’t want them to just leave so he decided to improvise with some jalapenos, grated cheese and tortilla chips. Long story short once the women loved it, the nachos business skyrocketed! Moral of the story: The desire to please women can lead to extraordinary feats. When a famous person expects something from us, our stress levels go haywire. We’re too scared to move and too nervous to think, which sets the stage for potential failure. This is exactly what happened to Henri Charpentier. He was a 14 year old waiter who worked at Monte Carlo’s Café de Paris accompanied by his uncle, the famous chef Escoffier. His task was to serve crepes to the Prince of Wales.

Turns out he was right to panic. He accidentally (spilled some brandy on the flames and flambéed the crepes. Henri couldn’t exactly make the Prince of Wales wait. He tasted his creation and actually liked it. Serving an accidental dish to a Prince was surely a terrifying gamble. Luckily, the Prince loved it! He named the dish Crepes Suzette in honor of a woman who was one of the Prince’s guests. The next day, Henri received a jeweled ring, a panama hat, and a cane for his excellent service. As for the Crepes Suzette, it became a world famous dish! And they all lived happily ever after. And that folks is among the most bizarre food origin stories. The Ice Cream Cone is one of the most important innovations in ice cream history also ranks among the bizarre food origin stories. In fact, before it was invented ice cream was either licked out of glass containers or wrapped in paper. In short, eating ice cream was gross. Who would want to eat in a glass licked by so many people? But even if it was unsanitary, the demand was high. Ice cream vendors usually lacked the time to properly wash the dishes when people kept demanding it in hot days.

READ ALSO:  10 Most Powerful Militaries in The World

Fortunately in 1904, the invention of the ice cream cone saved all ice cream lovers from everyone else’s slobber. Although Marchiony is credited as the inventor, a similar version was introduced in 1904 at the St. Louis’ World’s Fair. A Syrian concessionaire named Ernest A. Hamwi rolled his waffle-like pastries known as ‘Zalabis’ into a cone. He gave it to his neighboring ice cream vendor who ran out of dishes to serve his ice cream with. Long story short, the customers were happy, ice cream vendors had less hassle, and eating ice cream was a lot safer. Who knew a good deed could go a long way? As we all know from our history books, the English colonized India to gain access to spices. Spices were so rare and so “exotic” that these seasonings were fought for by other countries.  If they were so popular it wouldn’t be surprising if someone tried to recreate them locally. A nobleman attempted to do just that by commissioning two chemists named John Lea and William Perrins to recreate a sauce he loved in Bengal. But how would two chemists replicate something they never even tasted before?

As expected, the attempt to replicate the sauce was bad. The seasoning turned out to be horrible and inedible. It was so bad they forgot to throw it away! So the sauce was left in the middle of a cellar for two years. When the two chemists rediscovered the sauce two years later, we expect the sauce with all the horrible memories attached to it– to be thrown away. But instead these curious chemists defied all these possibilities by tasting it! What kind of curiosity compelled them to do just that? It is like drinking milk that has been expired for two years. Worse, it could have been poison. They could have been killed!

But luckily for these chemists and all lovers of meat marinades, bloody Mary’s and Caesar salads, the magic of time allowed the horrible sauce to become the delicious and savory Worcestershire sauce we now know today. What happened to the two chemists? Lea & Perrins began selling the famous Worcestershire sauce in 1838.