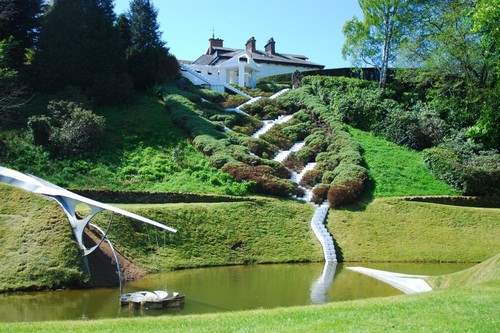 10 Most Beautiful and Stunning Staircases. The Spiral Staircase Linzhou, China, is built among the mountain face in the Taihang Mountains. Due to its whopping height of 300 feet, it offers the same thrill of mountaineering without the same danger or strain. But, that doesn’t mean that journeying up this staircase is devoid of any peril or toil. Only people below 60 years with healthy heart and lungs are allowed to face being battered by the strong wind higher up the creaky but authentic elevator where they are birds flying past them.

9. Stairs Above The Sea The Stairs Above The Sea is a man-made stone staircase on the small islet of Gaztelugatxe in Spain, connecting the island to the mainland. The island is a rocky one, and has a chapel on it which adtes back to the 9th-10th century, and it can be accessed by a narrow path, after crossing a solid stone bridge, and going up the Stairs Above The Sea, one of the most stunning staircases in the world, takes a jagged path. There are 237 steps, though some sources cite that there are 229 or 231 stairs.

READ ALSO:  10 Countries With The Highest Suicide Rates in The World The complex of Awaji Yumebutai is located on Awaji Island in Hyōgo Prefecture, Japan. One of the gardens of this complex is the 100-level garden, or Hyakudan’en in Japanese, which is a part of the Awaji Yumebutai hotle and resort. It has 100 different flower platforms. These smaller square-shaped terraced gardens can be reached by long cascading staircases. Apart from the small stairs, there is also a central staircase. Visitors can get an amazing view of the Osaka View from the garden. The Haʻikū Stairs in Hawaii, USA, is often referred to as the Stairway to Haven. It is a steep hiking trail on the island of Oʻahu. It is one of the most beautiful and stunning staircases in the world, with a staggering 3922 steps. The trail, begins as a ladder and is spiked to cliff on the southern side of the Haʻikū Valley, climbing across and down the hill. Originally, it was made of wood, but was modernized in the 50s. It was closed to the public in 1987, but hikers ignore the still climb it anyway. The Moses Bridge Stairs are located in Netherlands. The 17th century Fort de Roovere here, which had an island status, is surrounded by a moat which, initially, had not bridge. But a recent restoration process saw the addition of an access bridge, a discreet sunken bridge, cut into the waters of the moat. It is called the Moses Bridge Stairs, and the name is quite justified. The bridge has two dams on each end, with two sets of stairs as a part of the bridge for the ascent and descent. The Rue Foyatier stairway in Paris, France, leads to Montmarte, one of the leading tourist attractions in Paris, with the Sacre-Coeur basilica located on its top. The Rue Foyatier stairway, with its 300 steps, is one of the most stunning staircases in the world, as it runs along a railway of the funicular that takes visitors to the top in a matter of less than 90 sec. But, a walk up the stairs, though a little strenuous, is an amazing experience. At the summit of Montmarte, a great view of Paris awaits. The La Piedra Del Peñol in Columbia is a monolithic formation located at the town of Guatapé in Antioquia, rising from the bottom of the hydroelectric dam of Peñol-Guatapé. Also known as the El Peñol Stone, or simply as La Piedra, the huge and heavy stone, made of quartz, feldspar and mica, has some rock breaks, used for constructing 650 stairs that lead to the top. Earlier, a viewing spot on top of the rock, which offers the view of the shore-perimeter, can be reached by climbing 740 steps. The Inca Trail is an ancient route from the city of Cuzco, leading to the Machu Pichu in Peru. The trail makes several detours between the mountains and around the hills in this rugged topography of the region. The trail descends from a high point called Phuyupatamarka to include a staircase of about 1500 steps, some carved in granite. Again, a steep set of stairs as a part of the trail leads from Wiñay Wayna to Inti Punku. Some of the trail’s staircases, famous as the floating staircases are precarious. The Universe Cascade in Dumfries, Scotland is in a private property called the Gardens of Cosmic Speculations, opened for the public only for one day every year. This staircase is work of art, built in the structure of a cascading waterfall. The dramatic design, criss-crossing the steep hillside, with 25 landings, is a representation of the important shifts in cosmic history, with the top being the present, and the bottom being the mysterious origin of the universe, as the steps disappear into dark waters. The mountain region of Girnar, located in Gujarat, India, are Hindu and Jain temples, and 9999 steps to climb. They begin from Domdar Kund, and after 4000 steps is a plateau with Jain temples. 2000 steps later lies the Amba Mata temple, visited by Jains and Hindus. After another 2000 steps, there is the Kalika temple for the Aghora ascetics. The Dattatreya Paduka can be reached by climbing a total 9999 steps. The rocky trail can be intimidating and tiring, but offers a panoramic mountainous view.