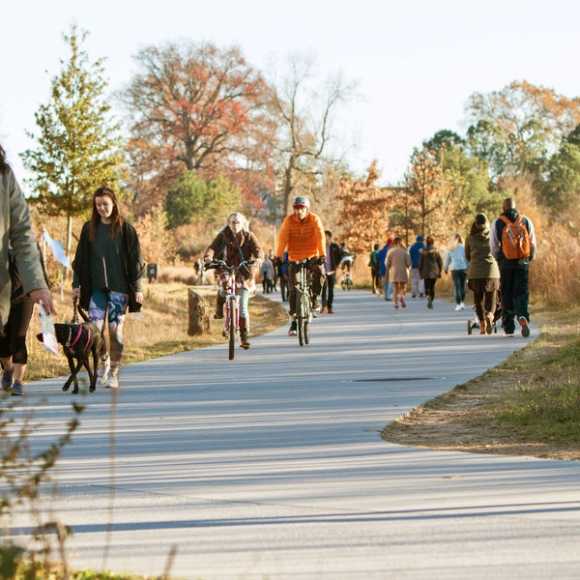 In the 1960s, a group of railroad history lovers and outdoor enthusiasts in Washington, D.C., organized an effort to preserve unused railroad corridors as public multiuse trails. Their efforts began with a letter to the editor at the Chicago Tribune, and by 1986, the movement had grown into a nonprofit organization known as the Rails-to-Trails Conservancy.

Now, some 30 years later, there are more than 2,000 rail trails scattered across the United States that range in length from a few miles to 240 miles (Missouri’s Katy Trail State Park). Some are well-known, like New York’s beloved High Line, while others are small town secrets. Most trails are open for a variety of public activities, including walking, biking, horseback riding, and even snowmobiling. So dust off those running shoes and make the most of the spring weather by visiting one of these eight great rail trails across the country. In 1965, the 32.5-mile Elroy-Sparta State Trail became the first rails-to-trails project in the country. It follows the path of the former Chicago and North Western Railroad line through five small towns. The project began a year after the trains stopped running. Highlights of the trail include three rock tunnels, including the .75-mile long Norwalk tunnel. The trail draws over 60,000 hikers, walkers, and bikers annually, and snowmobiles are permitted on the trail in the winter. (Note: Bikers over the age of 16 must purchase a trail pass for $5.)

The Atlanta BeltLine, one the largest redevelopment projects in the country, is transforming a 22-mile stretch of railway corridors into a trail that connects 45 neighborhoods. The ongoing project covers four inactive freight train lines and will include 33 miles of multiuse trails when it is completed in 2030. Currently, four sections of the trail are open, including the popular 2.3-mile West End Trail, which, in 2008, was the first portion to open. This stunning 12.4-mile trail begins in the southern part of Burlington and traces the shores of Lake Champlain before ending on a 2.5-mile raised rail bed that juts across the lake. The trail ends abruptly, but at the terminus, the views of the lake and the Adirondack Mountains are unmatched. A seasonal bike ferry connects the causeway to South Hero Island, where visitors can try out one of the Champlain Islands bikeways. These include the 15-mile South Hero loop, which passes four miniature stone castles built on the island by a local gardener as a reminder of his native Switzerland.

The epic 49.3-mile Pinellas Trail is part of the Coast-to-Coast Connector project, which will span 250 miles across the state of Florida. The trail begins in St. Petersburg and heads north to Tarpon Springs before jutting into Paseo County, a five-mile addition that opened last summer. The first 15 miles offer scenic views of St. Petersburg, and mile marker 29 is a great spot for views of the Gulf. The 11-mile Capital Crescent Trail starts in Silver Spring, Maryland, and ends in the historic Georgetown neighborhood of Washington, D.C., where it traces the Potomac River. Keep your eyes peeled for wildlife—deer, foxes, and birds—and the occasional Congressperson jogging along. (Note: The trail is currently closed east of Bethesda until 2022 for construction of a light-rail line.)

Postcard-perfect views of Olympic National Park’s snowcapped mountains, glacier lakes, and old-growth forests are the rewards of the 19.6-mile Olympic Discovery Trail–Spruce Railroad Trail in Washington State. The trail follows the path of the Spruce Railroad, which was built by the U.S. military during World War I to transport lumber for war planes from coastal forests to Port Angeles. Ironically, the line was completed 19 days before the war ended. The track was taken over by commercial logging companies until 1954 and eventually converted into a trail. (Note: A one-mile section of the trail is closed until the end of July for improvements starting at the Camp David Jr. Road Trailhead.) Adventure junkies should head to the 11.9-mile Mineral Belt Trail in Leadville, Colorado, which, looming at over 10,000 feet, is the highest incorporated U.S. city. The paved trail loops through the historic mining district and rewards visitors with sweeping views of the Sawatch and Mosquito ranges. The trail is open all year; in winter, it is maintained for biking, snowshoeing, and cross-country skiing.

The 11.1-mile Sacramento River Rail Trail begins with a steep three miles at the Keswick Dam, then flattens out for the next seven miles, providing scenic views of the Keswick Reservoir. The grand finale is Shasta Dam, which is the eighth tallest dam in the United States and forms Shasta Lake. The rail trail is a portion of the longer Sacramento River Trail, linking north of the town of Redding.

To find a trail near you, visit the www.traillink.com, a database maintained by the nonprofit Rails-to-Trails Conservancy.