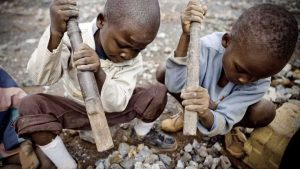 These African Children Are The Real Cost Of Electric Cars – There are a lot of reasons that the world touts the necessity of electric cars one of which is the clean energy that it runs on which promises reduced pollution.

This reason has translated to a focus on a future with electric cars that led Britain to make a pledge, recently, that it will ban the sale of petrol and diesel cars from 2040 and switch to electric vehicles.

While the pledge is no doubt historic and certainly means a lot of different things for African countries which subsist on revenue from crude oil export, it seems that the full cost of this shift has not been fully considered.

As they work in these mines, the children run the risk of skin disease, deadly lung conditions and even eye problems from the toxic red dust. These children undergo all this risk for a wage that runs as low as 8p a day.

On that wage, the children are made to check the rocks for the tell-tale chocolate-brown streaks of cobalt. Cobalt is the raw material necessary to make the batteries that power electric cars.

With the new focus on electric cars, more and more children will surely be dragged into this hellish labor. Despite the great advantages of running vehicles on clean energy, these African children are paying the real price for our noble ambitions.

DR Congo is the world’s biggest producer of cobalt, it has 60% of the world’s reserves but the mining industry is unregulated. Cobalt is also used in smartphone batteries where 10 grams of refined cobalt would be enough to produce one smartphone battery, an electric car needs 15kg.

To furnish the demand for Cobalt, adult miners dig up to 600ft below the surface. They use basic tools to do this with no modern machinery being made available to them and they are often without protective clothing. Children are sometimes sent down into the narrow makeshift chambers where there is always a constant risk of collapse.

The UN estimates that about 80 children per year die mining cobalt in the Katanga region in the southeast of the country. The UN stats do not, however, account for unregistered deaths which happen when bodies are buried in the rubble of collapsed tunnels. There are also those who do not die but live their lives with chronic diseases.

For a country devastated by civil wars, mining is a way for families to survive but it is amazing that despite Cobalt’s depiction as the ‘new gasoline’ by Goldman Sachs, the people of DR Congo are not enjoying any development or wealth. The law prohibiting enslavement of under-age children in the country continues to be unenforced and so the children will remain the real cost of an electric car for a while.