We all remember the game, but it goes by many names in Africa and the diaspora. Here’s a sample of them.
Picture it. The wooden board with six pits on each side. The four round seeds that sit in each gourd. The satisfying sound the seeds make when you drop them in each pit, one by one. And of course the sweet accomplishment of getting to pick up seeds from your opponent’s side on the other half of the board.

You know that game.

Maybe you played it on a beautiful, ornate hand carved board with seeds that were round and smooth. Or maybe you dug out holes in the earth and played with stones you found on the ground. Or maybe it was just an old set that had been in your family for years- not particularly decorative or special, but the game you could depend on to pass the hours after you’d grown tired of play that involved running, and TV wasn’t an option. Or maybe you watched uncles and male cousins play it for hours with concentration that was only broken with an exclamation or snapping fingers when someone picked up from several pits after many moments of contemplative strategy. 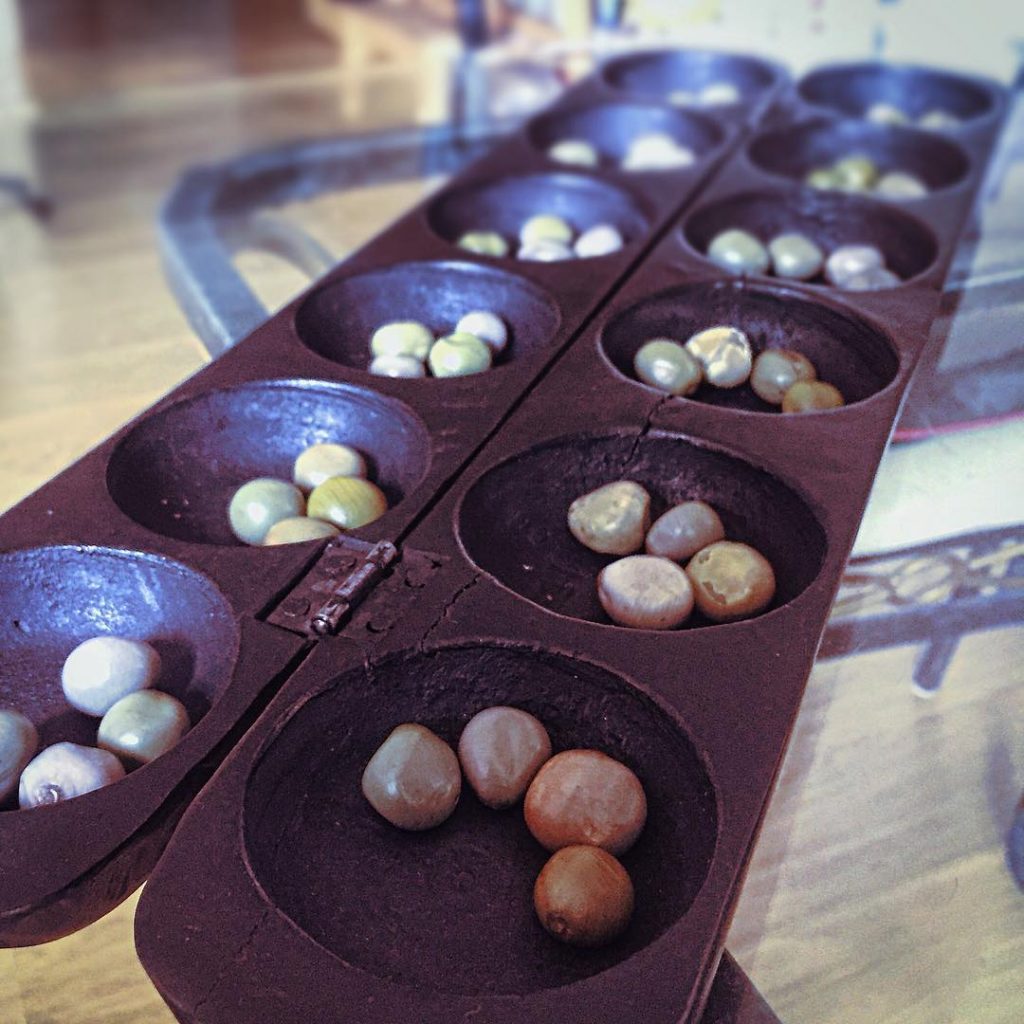 We all remember the game.

It’s played all over Africa and the diaspora, with variations on the rules worldwide. But to talk about it usually involves some description because it goes by a different name just about everywhere.

Oware is an Ashanti  abstract strategy game among the Mancala family of board games (pit and pebble games) played worldwide with slight variations as to the layout of the game, number of players and strategy of play. Its origin is uncertain but it is widely believed to be of Ashanti origin.

Played in the Ashanti Region and throughout the Caribbean, Oware and its variants have many names – Ayò, Ayoayo (Yoruba), Awalé (Ivory Coast), Wari (Mali), Ouri, Ouril or Uril (Cape Verde), Warri (Caribbean), Wali (Dagbani), Adji (Ewe), Nchọ/Ókwè (Igbo), ise (Edo) and Awélé (Ga). A common name in English is Awari but one of the earliest Western scholars to study the game, Robert Sutherland Rattray, used the name Wari.

Oware is one of the most played games in the Kalah Family of pit and pebbles games. It is the National game of Ghana and the word “oware” means “He She Marries”. The mythology behind the name is believed by many to be the result of a wedding between a man and a woman and the dowry (represented by fields (pits) and seeds. Basically, you’re playing for fruitful paddocks.

The game as played in Ghana is a social event and is commonly played on the street. Heckling, banging the fist and mocking are all allowed. The game is also used in education among the Asanti children for the development of maths skills.

Most of the oware available in Ghana is hand carved and comes with traditional symbols of the Asanti people carved into the wood. The traditional playing seeds are Bonduc seeds, a bright green seed with a hard shell. Stones and sometimes recycled glass are used.

As for the other games in the Mancala Family, the rules differ from country to country; however, for Owarethere is an international organization which sets the standard.

The basic object of the game is to capture more seeds than your opponent. This is done by landing the last seed you are “sowing” in a pit on the opponent’s side which contains one or two seeds. Other rules allow multiple captures and the avoidance of “stalemates”.

After posting a video where the game is called “choro” in Uganda on Instagram, we asked you to weigh in to let us know what it’s called where you’re from and the comments were lit.

Goal of the Game

The goal of oware is to capture the greatest amount of seeds as possible. To do so, players make moves in alternate turns until one of them has captured more than 24 seeds. The player who captured more seeds than his opponent when the game ends wins the match. It may also happen that both players have captured the same amount of seeds at the end. In this case, neither player wins the game and the match is said to have ended in a draw.

Each move of the game is done in three phases: collecting, sowing and capturing. During the sowing a player distributes the collected seeds along the board, and during the capture phase the player takes, if possible, the seeds found in the pits of the opponent.

Sowing process in oware South sows 4 seeds, distributing them around the board one by one in a counterclockwise direction.

The game has been traced back to ancient Egypt where pits were found carved into roofs of tombs. Some sources cite up to 200 different versions of the game. If you’re not in a place where you can easily find it, and are thinking of getting a set for nostalgia’s sake, you can buy it online or even play it on your phone.

This following list is based on reader comments and is in no way definitive.

Enjoy the memories and take a look at the different names of the game below:

“When you play Warri with God, you get no seed.”
From Antigua.

“By the time the fool has learned the game, the players have dispersed.”
From Ghana.

1. What Goes Around, Comes Around

In life, this is telling you that, the world moves in circles and the wealth you have today, can increase or decrease and what you do to your brother can get back to you. The seeds you send around can get you more or less depending on how smart you are with the game and same in life, but you should never be greedy and subsequent writings will depict why you should never be greedy as we move along.

2. Think Before You Act

In the oware game, if you’re not observant and always in haste, you will lose. This is because if you see an opponent’s marble free to be able to pick and you rush, you might end up opening more chances for them because as you’re eager to win your opponent’s marble, you may have more free marbles behind you and the moment you end up with, you can give them the chance to swoop two houses. To make a move just don’t rush because you see free marbles, think and be sure you’ve protected all your marbles before making the move.

In life, as the saying goes, “Hasty climbers have sudden falls” and it’s true. Those who are always in haste to acquire everything in life always end up with nothing. We must accept that everything is step by step, just as we learned to crawl, walk and run. If you take a critical look at the way a ladder is designed, you notice if you don’t go step by step and decide to jump over the steps, you are likely to fall. The oware game in this situation teaches to be patient in life and take things one step at a time.

3. Opportunity Comes, But Once

Sometimes while playing, you realize you have only one opportunity to fetch your opponent’s marble if you don’t do it or ignore it, you may end up realizing that’s all you needed to win over your opponent or capture his house.

Same in life, sometimes some opportunities pass you by and you ignore and later in life, you realize that’s all you needed to be successful. Take the chance when you have and don’t let it go.