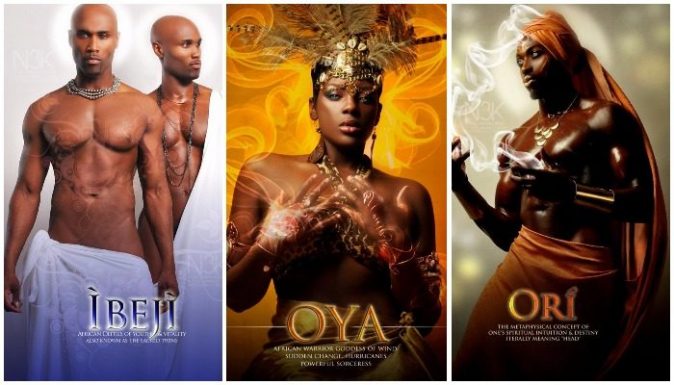 However, James C. Lewis is a divergent! He used photo manipulation to bring the Orishas, deities recognised in Niger and Benin to life. According to Lewis, “Throughout my formal education from elementary up through college I never heard tale of African deities. A little over a month ago I began to research online to find information in regards to the gods and goddesses of Africa. To my surprise there were many, however the ones that stood out the most were the deities of Nigeria and Benin, West Africa which they referred to as Orishas.”

With such an amazing vision, Lewis created iconic works which cannot be faulted. He said, “I wanted to portray the regal beauty of each Orisha while also representing their majestic sensuality. Each iconic depiction was rendered to lend strength to our resilience as a great race of people and to show our youth that they are beautiful, bold and brilliant just they way God created them to be. […] each Orisha’s name is written in the Yoruba dialect and captures imagery of powerful men, women & children of various complexions who are all of African descent.”