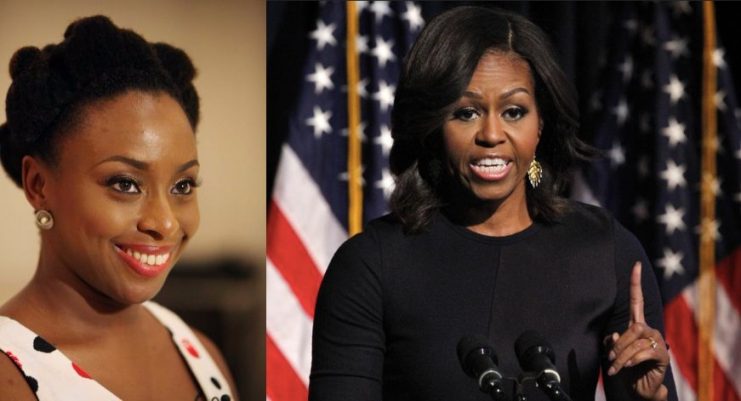 In an article, titled  ‘To The First Lady With Love’ and co-authored by Nigerian writer, Chimamanda Adichie and 3 other American writers, the Nigerian writer gave her view of the soon-to-hand over American first lady, Michelle Obama.

Chimamanda started her piece with descriptions of the first lady from her very first appearance at the Democratic convention in 2008. She carefully noted her appearance back then and linked it to her unique strong personality.

Chimamanda also noted the first lady’s transformation in the public eye from then till now.

Adichie, writing in the first lady article about the FLOTUS, said:

“She first appeared in the public consciousness, all common sense and mordant humor, at ease in her skin. She had the air of a woman who could balance a checkbook, and who knew a good deal when she saw it, and who would tell off whomever needed telling off. She was tall and sure and stylish.”

The writer established herself as an admirer of Michelle Obama for a range of reasons; but most importantly she was a confident woman who effortlessly modeled dignity. A woman who lives for a noble cause and on purpose.

It is a glaring fact that Michelle played an important role in Barrack Obama’s political success, the presidency especially.

READ ALSO:  The rebirth of Johannesburg as a destination for travellers

Michelle makes it okay to be a normal human being even in the overwhelming atmosphere of power. She may have earned herself a title in history as one if not the best ever American first lady.

For one she would be the first lady who gave the most hugs in American history, from children to veterans and even to republican and past president George Bush.

Subtly, yet efficiently, she exercised her progressive and democratic leadership.

Can a Woman Be a Great Leader Without a Dragon?
The 10 Most Important Skills Every Man Needs To Have
Rooms &amp; Rates
Here’s How to Fix That Lonely Wasteland You Call Your Website
The Most Dangerous Countries to Travel to in 2017
10 Lady Gaga Quotes to Inspire You to Be Your Authentic, True Self
Post-Presidency: Obama Is About To Make More Money Than He Did In The White House

Chimamanda’s piece in the American first lady article, did not fail to point out the gentle way she has magically charmed her naysayers and critics overtime.

According to the writer, Michelle has had to deal with tons of criticisms as first lady.

“The insults, those barefaced and those adorned as jokes, the acidic scrutiny, the manufactured scandals, the base questioning of legitimacy, the tone of disrespect, so ubiquitous, so casual. She had faced them and sometimes she hurt and sometimes she blinked but throughout she remained herself.

READ ALSO:  Meet The Men Who Gave Up Dating In Favor Of Life-Sized Dolls
/ 5