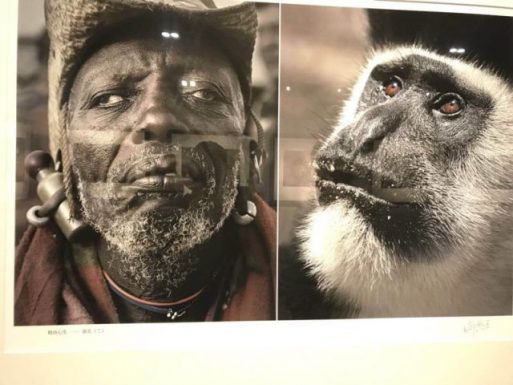 Chinese Picture Exhibit Compared Africans To Animals – Africans have suffered a lot of indignities from around the world and even from within the borders of the continent, still a lot of anger is following the Chinese picture exhibit that compared Africans to animals.

The Chinese picture exhibit in question happened at the Hubei Provincial Museum. It was touted as a series meant to celebrate the harmony between man and nature.Chinese Picture Exhibit Compared Africans To Animals.

See Also: PHOTOS: 10 Photography Tricks That Will Blow Your Mind Away

The pictures in the exhibit were taken by a photographer during his travels to Africa over about 10 years. The Chinese picture exhibit was titled “This is Africa,” and showed shots of animals normally pictured in Africa. One section, however, which was called “One’s heart makes one’s appearance” displayed portraits of Africans next to animals.

A monkey, a gorilla and a cheetah were just some of the animals placed side by side with images of African children or adults. The museum removed the photos after receiving complaints from the African community in China but the exhibit was on display since late last month in honour of China’s eight-day National Day holiday when the museum received some 133,000 (link in Chinese) visitors.

“It’s not shocking. Africans are not strangers to racism here in China or elsewhere. But it is sad that despite deepening economic connections and interactions between Chinese and Africans, there’s still clearly so much racism and lack of cultural understanding,”

See Also: Trevor Noah Is Now An Award-Winning Author, 10 Of His Best Quotes

READ ALSO:  The Top 10 Most Extremely Beautiful African-Americans in the World ✔

Wang Yuejun, the exhibit’s planner wrote in a statement to Quartz that “the museum fully understands” the complaints but he also tried to justify what he sees as a cultural misunderstanding. According to him;

“The exhibit’s main audience is Chinese. In the Chinese esthetic, comparing people to animals is not offensive,”

It appears that a lot of Africans, however, find it offensive and one can only hope that the museum has truly learnt its lessons from this episode.