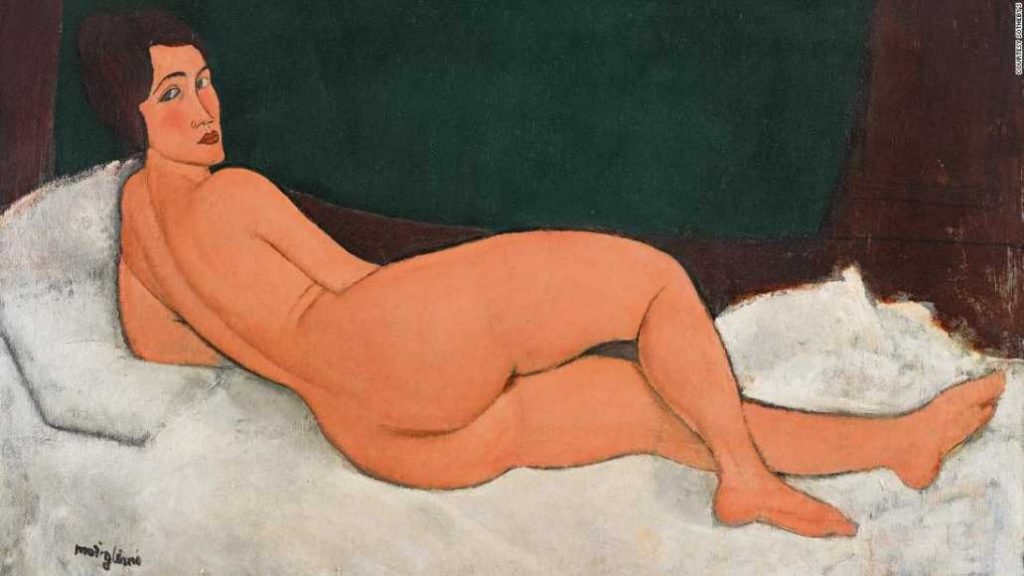 Controversial Nude Painting Worth Millions Breaks Auction Record. NEW YORK (CNN) — Some art is priceless. Others come at a price so high that it can spin heads.

One such piece of Italian art is not only spinning heads, it is also setting new records.

Sotheby’s, one of the world’s largest brokers of fine and decorative art, jewelry, real estate, and collectibles, says otherwise as it announces that an infamous painting is set to break the current auction record.

A masterpiece that was once censored on the grounds of obscenity has now set a new auction record.

“Nu couché (sur le côté gauche)” (1917) by the Italian artist Amedeo Modigliani, which depicts a naked French woman in repose, will lead its Impressionist & Modern Art Evening Sale on May 14.

The Modigliani masterpiece has a pre-sale estimate in excess of $150 million — the highest estimate placed on an artwork at auction.

Leonardo da Vinci’s “Salvador Mundi,” which became the world’s most expensive artwork when it sold for $450 million in 2017, had a (relatively) modest estimate of $100 million.

Modigliani first unveiled his series of nudes in 1917 at his first and only solo show, an exhibition at Paris’ Berthe Weill gallery.

It’s said that the exhibition was shut down within hours of its opening because a police officer was offended by the models’ pubic hair.

“These women are overtly sexual and that really connects with the way women were troubling society at the time,” Nancy Ireson, a curator of Tate Modern’s recent Modigliani retrospective, told CNN in November 2017. “These pictures were made during the First World War, when more women were working, more women were living independently … there really is a social anxiety about that.” Controversial Nude Painting Worth Millions Breaks Auction Record

“Nu couché” is one of 22 reclining nude paintings by Modigliani (he also painted 13 less valuable seated nudes), and one of only nine left in private hands. Its current owner bought the painting for $26.9 million in 2003, but since then, Modigliani’s market value has skyrocketed. In 2010, “Nu assis sur un divan (La belle romaine)” (1917) sold for $69 million and, just five years later, billionaire collector Liu Yiqian bought “Nu Couché” (1917-18) for $170.4 million, setting the standing record for the artist at auction.

“This, ladies and gentlemen, is one of the finest paintings by any artist remaining in private hands,” he said. “It’s certainly the greatest painting Modigliani ever painted.”

Before it goes on sale in New York on May 14, the painting will be publicly exhibited at Sotheby’s Hong Kong and New York showrooms.