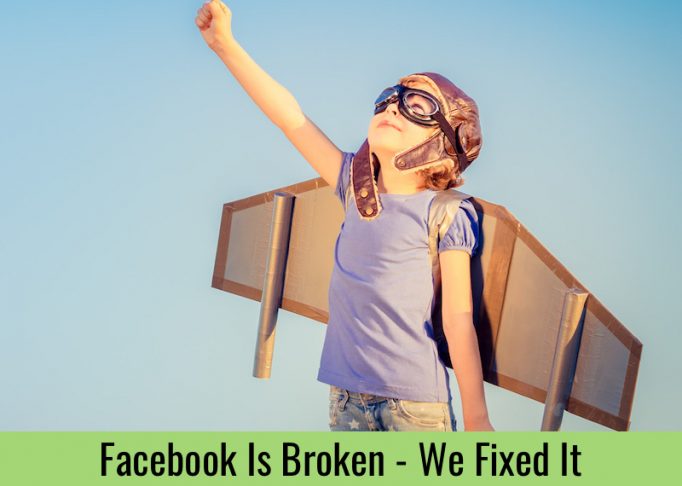 It’s no secret that I  was not a big fan of Facebook.

It used to be an awesome place to do business. Who can forget 3 years ago when it was possible to launch a campaign and get a quick 4,000% ROI. When 1 cent clicks were more common than a troll on a 4Chan thread. The glory days when you could create a post and have 60% of your fans see it. Ahhhhh happy memories.

Unfortunately, it was never going to last. Facebook became a victim of its own success.  In short, it ran out of inventory and it had to restrict how many people saw your posts. So Facebook limited the reach, increased prices and leveled the playing field by adding relevancy scores.

In the words of Florence And The Machine, the dog days were over.

Many people like myself who can remember how good it was in the past really took exception to Facebook for the changes. We were real downers on them.

I hated how the cost of ads skyrocketed and their customer service frankly sucked. To top it all off, the reach that posts got was atrocious.

I was running ads a month or two back and it was costing me $1.67 per engagement. Not good!

As I was just promoting a few posts and not selling anything that was ridiculous and certainly not worth my while continuing.

That prompted me to dive deep into the bowels of Facebook and figure out what was working and what wasn’t.

I looked at lots of factors and tried a few things.

I realized that Facebook ads aren’t necessarily expensive. I was just running the wrong type of ads.

READ ALSO:  10 Most Expensive Mobile Phones in the World

Imagine my surprise, when over the past few weeks I’ve been getting ads that have cost me between 1c and 3c. The 3c ad is running to exactly the same audience as the $1.67.

Then to top it all off, I noticed that my relevancy score was 9. I’ve never managed to get over 6 in the past.

Now before you rush off and call bullshit on this – because you’ve been told you can’t get results like that by some PseudoGuruWannabe, or everything you’ve read about cheap clicks has proved to be bullshit – almost every step of the processes were discussed and theorized about openly in The Lifestyle Marketer Facebook group. So this isn’t like some of the things you see where miraculous results suddenly appear from nowhere.

This is all from “I wonder what would happen if…” or  “I am going to try an experiment” type conversations.

By simply looking at what was working on Facebook and complying with what they wanted, I was able to get the “Holy Trinity.”

It’s like meeting an old friend who you stopped meeting up with because they used to have anger issues and realizing that they have changed.

You start to realize that all the great things that made you like them to start with are still there.

But it slowly dawns on you that the reason they were angry was because of you.

And I made it angry. It’s me that has changed.

Shot Down In Flames

I have to admit though as good as I thought my results were when I shared them in the Facebook group, I was shot down in flames.

My sometimes business partner, Tim Goodwin, posted a screenshot of his recent ads. Every one of them had a “Perfect 10” relevancy score. It made my 9s look mediocre.

So we jumped on a call and compared notes.

It transpired that we were both doing things that we have never seen taught in any Facebook course. I am pretty sure that this is cutting edge stuff so for once, we are ahead of the queue.

As marketers, we are all used to seeing massive returns from Facebook ads shown in sales letters. Unfortunately, they usually come with equally large advertising budgets.

Reality check: If you are spending $500 a day, it’s much easier to get lower cost ads.

Honestly, have you seen many $5/day ad campaigns that return upwards of 750% ROI and get cheap clicks?

Not until now at least!

You see, because myself and Tim (I know it should be Tim and I!), hate to spend money on speculative ads we generally start off with a simple $5/day budget (£5 in Tim’s case).

These are the very same campaigns that get a relevancy score of 10 for Tim and 9 for me.

Simple $5 ads, in Tim’s case, he actually uses recycled content to get those results so he isn’t spending hours crafting content. Just a simple copy and paste and an image.

As I said, these are methods that are so cutting edge that I’ve not seen them in any other training… YET!

I say they are unique, however, they are only using the proper marketing principles myself and others have been talking about for years.

READ ALSO:  Vodafone Made For Me (Made4Me): Bundle Code, Offer and Price

Simple marketing, done right, but with a bit of spice and seasoning.

Tim and I, (take that, grammar Nazis), have been persuaded to hold a webinar next week where we will show you what we are doing now.

Plus we’ll show you a little bit of magic that will take your FB marketing to a new level. This alone will open your mind to endless possibilities if you didn’t see my live test last week! If you did see it, I’ll pull back the curtain so you can see exactly how it was done.

As a little teaser, let’s just say it was a profitable campaign that generated subscribers for cents rather than dollars.

If you have a Facebook page that you want to improve or you want to run profitable ads, then you should hop on board. Click the image below to register! And don’t forget to share with anyone you think could benefit. (you missed the original webinar but we are running it now as an “as live” webinar you can ask questions and we will get back to you and answer. Plus if you exit when you return it should pick up from where you were!)