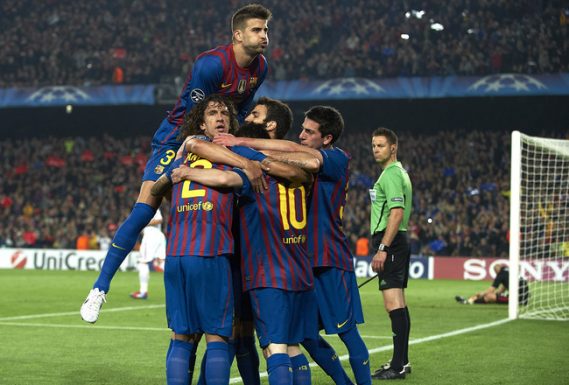 FC Barcelona: 10 Things That Make Barça Great. For years, people have wondered what exactly makes a football club great? Is it based off of success, legacy, or a special connection that fans have with that club?

Especially in recent years, people from across the globe have developed the same sort of connection with FC Barcelona. Barcelona have some of the best players in the world, a strong legacy, and to many people, they are extremely likable.

Barcelona have taken the football world by storm and despite their aggregate loss to Chelsea tonight, they still are an impressive side for the ages.

But even if Barcelona don’t reach the final, they will still be loved by people throughout the globe. What is the reason why so many people love Barcelona? Lets see what they are.

Not every player on Barcelona’s squad is exactly a likable player (hello, Sergio Busquets) but for the most part, Barcelona’s players are well-liked.

With players like Xavi, Iniesta and Messi as strong ambassadors for their brand, Barcelona is in a situation that they can’t lose.

For most clubs, their top players are hated by many, such as Cristiano Ronaldo and Wayne Rooney, among many others.

El Clasico. Last year, the rivalry between Barcelona and Real Madrid officially reached the next level with multiple trophies on the line and a spot in last year’s Champions League final.

El Clasico is easily the best rivalry in the world today in terms of talent and the recent plot. The entertainment that comes from this rivalry is one that cannot be matched by any two sides in any sport at the moment.

Being one of the two most dominating clubs in Spain has allowed Barcelona to amass an amazing total of trophies captured.

Barcelona has won the Copa del Rey 25 times, La Liga 21 times, the Champions League four times, among many other titles.

With the likes of Cryuff and Maradona as former players for the club, Barcelona have also been able to recruit many of the greatest footballers ever to become part of their ranks.

Barcelona have become compulsive winners throughout the last decade. With globalization continuing to galvanize football, Barça have claimed an impressive amount of silverware.

This culminated in 2009, where Barcelona became the first and only football club to complete a sextuple.

It is easy to root for a club that possesses some of the best players in the world, but Barcelona is able to bring these players together in a way that football fans love.

With the likes of Messi, Xavi, Iniesta, Fabregas, Villa, Piqué, Puyol and Sanchez on their side (along with many others), Barcelona are able to have numerous stars starting every match and achieve success due in large part to this.

The Camp Nou is the largest stadium in Europe and is certainly one of the most intimidating. With a capacity of 99,787, Barcelona is able to draw plenty of fans to all of their matches.

With the inscription of Mes que un club (More than a club) inscribed into the seats of the stadium and a fantastic environment, the Camp Nou certainly is one of the best places in the world for a football match.

Pep Guardiola has proven himself to be one of the top managers in the world during the last four years. The former Barcelona midfielder has led his former club to an unprecedented level of success since he became the manager in 2008.

Guardiola and his coaching staff have made Barcelona into arguably the most dominant club football club in history during his reign. They also have an uncanny ability to make all of their players play better thanks to their football philosophy.

Tiki-taka has become the primary style of Barcelona over the past several years and has been a primary reason behind their success.

Instead of relying on physical strength to win matches, Barcelona instead uses the technical skill of their players and their passing ability to monopolize possession.

This style is highly entertaining and it is a revolutionary style that is currently superior to any other playing style in the world.

What is greater for Barcelona to have than the greatest footballer in the world?

READ ALSO:  12 richest footballers in the world and their net worth

Messi also broke Barcelona’s all-time goalscoring mark last year and at the age of 24. It is scary to see what else he will accomplish in his career.