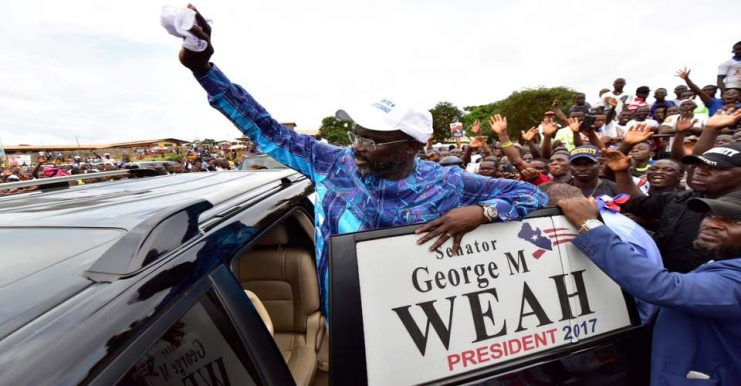 A Football God Is About to Become President: Former AC Milan striker George Weah is revered in soccer-obsessed West Africa, but can he convince Liberians he’s smart enough for the top job?

GBATALA, Liberia — At the Bong County Athletic and Social-Intellectual Center, soccer and politics have always gone hand in hand. Residents assemble most nights at this loftily named cafe in Gbatala, a market town deep in Liberia’s rainforest, to watch English Premier League soccer and set the world to rights. But as Liberians prepare for a presidential runoff election, talk of sports and politics is suddenly one and the same.

That’s because an international soccer star, the former Monaco, Paris Saint-Germain, and AC Milan striker George Weah, has emerged as the front-runner to replace Ellen Johnson Sirleaf, Africa’s first elected female head of state, who is stepping down after two terms. Weah won 38.4 percent of the vote in first-round elections last month, more than any of the 19 other candidates. Now he is set to face off against Joseph Boakai, Sirleaf’s vice president, who won 28.8 percent in the first round.

The runoff was scheduled for Nov. 7, but the country’s Supreme Court ruled at the last minute to delay voting until after the National Elections Commission investigates allegations of fraud brought by last month’s third-place finisher. When and if the runoff goes ahead, tiny Liberia will have the chance to write political history once again — this time becoming the first country ever to elect a former professional soccer player as head of state.

“I’ll vote Weah,” said 33-year-old James Youtee Mace, the cafe’s owner, who, like many of his customers, already reveres Weah for putting Liberian soccer on the map. “It’s time to see how someone else can do after 12 years under Sirleaf.”

The 51-year-old Weah (Football God Is About to Become President. Former AC Milan striker George Weah is revered in soccer-obsessed West Africa, but can he convince), who has made two previous presidential runs since hanging up his cleats in 2003, is hardly the first sporting giant to seek political office. In Pakistan, former cricketer Imran Khan sits in the National Assembly while boxers Vitali Klitschko and Manny Pacquiao are both elected officials in Ukraine and the Philippines, respectively. Former chess world champion Garry Kasparov briefly explored a run for the Russian presidency, before fleeing into exile in New York in 2013. To date, however, no sporting icon has come as close as Weah to clinching their country’s top job.

Known as “King George” by his fans in soccer-obsessed West Africa, Weah was born in the Monrovia slum of Clara Town. He grew up playing with local clubs for $10 a match before becoming one of the first young African soccer players to catch the eye of European talent scouts. Signed to AS Monaco for just 12,000 British pounds in 1988, he was named FIFA World Player of the Year in 1995, the only African ever to win the award.

Soccer talent alone, though, does not explain the depth of Weah’s political appeal. Even as he enjoyed a soccer player’s playboy lifestyle, with Porsche sports cars and a home in a gated community in Florida, he never forgot his home country as it lapsed into civil war. In 1997, at the height of his soccer career, he became a UNICEF Goodwill Ambassador, promoting vocational training for former child soldiers. He also lavished cash on scholarships and soccer training programs for Liberians and coached the national team during the presidency of Charles Taylor, who ruled from 1997 to 2003 and was later convicted of war crimes.

For the generation that grew up in the civil war, Weah was one of the only Liberians famous for something other than killing, limb-chopping, or cannibalism.

For the generation that grew up in the civil war, Weah was one of the only Liberians famous for something other than killing, limb-chopping, or cannibalism.

“Back then, the only impression the world had of Liberia was from the civil war,” said Veronica Torborh, a 25-year-old Weah supporter who spent her childhood as a refugee in the Ivory Coast. “But Weah we knew as a footballer and a humanitarian.” Football God Become President. Former AC Milan striker George Weah

Inspired by a meeting in the mid-1990s in South Africa with Nelson Mandela, who called him the “pride of Africa,” Weah formed his own political party, the Congress for Democratic Change, in 2005. He narrowly lost that year’s presidential election to Sirleaf and lost again as a vice presidential candidate in 2011.

Weah’s Achilles’s heel has always been his lack of education, something that hurt him in both of his previous runs. As much as they admire his rags-to-riches story and his generosity, many Liberians question whether he has the brains for the job. A high school dropout, Weah attracted criticism in 2005 when his campaign website listed a sports management degree from Parkwood University in London, an institution that was later identified as a fake “diploma mill” by the U.S. Federal Trade Commission.

In his current elected post as senator for Montserrado County, which includes Monrovia, Weah hasn’t exactly dazzled. Since taking office in 2015, he has been criticized for having one of the lowest attendance rates in the Senate of any lawmaker and for rarely making speeches.

“Only in Liberia would someone like Mr. Weah run for president,” said Benoni Urey, the founder of Liberia’s Lonestar Cell MTN mobile phone network, who ran against Weah in the first round of the election. “With all due respect, he lacks the intellectual capacity and even the necessary command of the English language. How will he address the world community, the EU, or ECOWAS [the Economic Community of West African States]?”

But since his last defeat at the polls in 2011, Weah has worked hard to become a credible statesman, according to Alex Vines, a Liberia expert at Chatham House in London. “He has matured significantly and seems better prepared for office if he succeeds this time round,” Vines said.

A Western diplomat, who spoke on condition of anonymity, agreed: “Weah is not as ignorant as people make out. All the same, some are asking if he’s smart enough and experienced enough for the top job, so a lot will depend on the team he puts around him.”

“Weah is not as ignorant as people make out. All the same, some are asking if he’s smart enough and experienced enough for the top job, so a lot will depend on the team he puts around him.”

Picking a good team is one area that the former soccer player claims to have an edge. But eyebrows have been raised over his choice of a vice presidential running mate: Jewel Howard Taylor, the ex-wife of Charles Taylor. Opponents see the choice as a cynical move to harvest votes from hardcore Taylor loyalists in his old stronghold in the northern and central part of the country, where Howard Taylor is now a senator. A spokesman for Weah, who asked not to be named, disagreed: “Jewel Howard Taylor was chosen because she is a force for stability and popular in her own right. She is not presenting herself as Taylor’s ex-wife.”

Questions linger over the extent of the campaign’s links to the jailed former warlord. For months, Weah has been dogged by questions about a phone call he reportedly received in January from Taylor, who is now serving 50 years for war crimes in a British prison. Weah claims that he was simply handed the phone unawares at a social gathering and that he didn’t know Taylor was on the line. Critics have alleged a deeper conspiracy, claiming that Taylor is calling the shots from prison.

Fueling these allegations is the perception that Howard Taylor is the brains of the partnership — she has degrees in law and economics from the University of Liberia and is seen as a savvy lawmaker. If she and Weah win, their administration is sure to face questions of who actually is running Liberia.

Also in question would be Liberia’s status as a darling of international donors, who have poured around $750 million a year into the country since the end of the civil war. A Harvard-trained former World Bank economist, Sirleaf governed efficiently enough to attract substantial debt relief. It remains to be seen whether donors will look on Liberia quite so kindly if the court of King George includes Taylor’s ex-wife — especially if she’s right behind the throne.