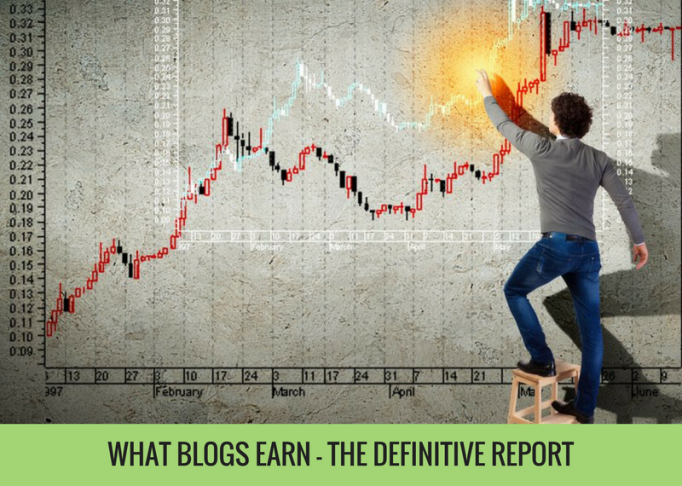 Ever wondered what niche you should go into or how much blogs earn in that niche? Or how much you could spend on traffic to your blog and still break even? Read on, I have the answers.

Last week I created a post about how to monetize your blog. In that article, I gave some average figures based on a little bit of research. After hitting publish I decided to do some further research. I analyzed over 100 blogs that had recently sold on Empire Flippers. Choosing Empire Flippers was pretty easy – these guys know the true value of blogs and also thoroughly research the income and traffic claims made by vendors. I was also intending to use Flippa but after 10 minutes of research, I realized that the income and traffic figures couldn’t be relied on.

One thing not included is email marketing as I had no way of tracking the email lists the sites had and if they were used properly. I would highly recommend adding an email list to every site, used correctly it can quickly become a key income generator.

I hope that this post will allow you to come up with a good monetization strategy for you blog. It’s certainly opened my eyes and has lead to a couple of new sites being planned and a full review of all our blog content.

I wanted to find a way to track income across different types of monetization despite the niche and despite the level of traffic. In short, I wanted to create a level playing field with a figure that was relevant to all sites. For this I chose a specific metric, RPM – Revenue Per Mille, which is simply the income made for every thousand visitors. To get this figure, I took the net profit for the last available month and divided it by the number of page views. This gave me the income per visitor. I then multiplied that by 1000 to get the RPM.

Typical blog monetization is via Adsense, Affiliate links or Amazon links. There are an increasing number of sites adding e-commerce stores or Amazon FBA (Fulfilled by Amazon) links, so I decided to also add these as it’s good to know that there are other options for monetization.

How Much Blogs Earn – The Definitive Report. How should you monetize your blog for maximum income… Click To Tweet

Having compiled data from over 100 sites, I then divided them into the different areas of monetization (Adsense, Affiliate, Amazon Associates, Amazon FBA and E-commerce) and worked out an Average RPM for that type of monetization.

I called this figure Median RPM.

One final figure I added is a metric that I invented just for this report: BECPC – Break Even Cost Per Click.

This is the cost per click you would need to pay to break even on advertising costs for an average or median RPM. For example, if your Amazon site had an RPM of $160, then if you could get clicks below the BECPC figure of 16c, you would make a profit.

Break Even Cost Per Click is an important figure to know if you plan on using paid advertising to generate traffic to your site. From the chart below you can immediately see for most types of sites, 20c per click is going to be the maximum you can pay. That is going to rule out many sources, but it does allow you to focus on sources you can afford.

In the report, I broke the data down into the niches the site were targeted at and, where possible, the source of affiliate income. This proved useful as I was able to see that specific niches produced similar income. For example, Amazon sites that were about home appliances generally earned an RPM of around $220.

Finally, I noted the amount the sites sold for and the date they were established. The date of establishment was an afterthought but while adding the data, I realized that it seems that the best time to sell a site is when it’s between 1 and 2 years old.

I am assuming that this gives investors enough income data and also allows them time to mature the site and scale the income.

You can get the full spreadsheet including the niches, notes and all Average RPMs, Median RPMs, Break-Even Cost Per Click, date it was established and how much the site sold for (many were life changing amounts) in the Facebook Group.

Every site owner should have an exit strategy from the time they start. Selling your blog is an obvious way of cashing in on all your hard work. A good broker will be able to get you 20-30 times your net profit over a period of time, typically 3-12 months. So if your net profit is $15,000 a month, you could expect a sale price of between $300,000 & $450,000.

If you’ve built up that kind of income once, you can always do it again so I would never hesitate to sell off a blog that earns a good amount of money.

As I said elsewhere in this post, it seemed to me that the prime time to sell your site was around the 1 to 2 year mark. This gives the seller time to build up an income and the buyer time to take it to the next level.

How Much Blogs Earn

Here is a summary of the data I extracted from the spreadsheet. The spreadsheet contains data for every site but for these summaries, I’ll just provide the Median RPM and anything I noticed.

What can I say about AdSense? It was my main source of income for many years. My average RPM for 12 years has been $9.95 so that stacks up well against the median. The highest earning AdSense site I found earned a pretty respectable $78.62. It was in the cosmetic surgery niche as was the 2nd highest RPM which was only $35.50.

The lowest earning site made only 33 cents for every 1000 visitors.

The only time I see AdSense as a viable income source is for a site with no other options who have over 100,000 visitors a month. Even adding AdSense as a secondary source of income will negatively impact your RPM as we’ll see in the next section.

Amazon has long been felt by many people not to be worth pursuing as the commission percentage is so low – starting at just 4% and rising to 8%. This report throws some light on this and I believe that the right Amazon site can be extremely profitable.

The median RPM looks pretty poor and this is because it was driven down by several badly monetized sites. There is a core of Amazon sites earning an RPM of $200-$240 (many in the home accessories niche). I do feel that properly monetized sites with good reviews should probably earn this amount. I noticed that several sites that perform badly compared to others in the same niche have AdSense as a secondary form of income. Even though AdSense may form just 5%-20% of the income, it probably drives away a large proportion of the buyers who would buy from the affiliate link.

One stat that may persuade any doubters about the value of the Amazon Associates program is that the average sale price for an Amazon site was over $212,000 compared to $41,000 for an AdSense site!

In fact, Amazon sites averaged more than any other apart from Amazon FBA and that had a $1.9m sale included.

The Average Sale Price of an amazon monetized site was over $212,000 5X more than those with… Click To Tweet

Sites monetized with affiliate links had one of the widest spreads of RPM, from 99c to $3,715. While most people relate affiliate income to selling ClickBank products, that was far from being the case. In fact, the only ClickBank based site I identified had one of the lowest RPMs.

CPA sites (Cost Per Aquisition) were far more prevalent and top of the pile was ShareASale, one of the longest established sites. Interestingly, while many of the RPMs were good, the incomes weren’t particularly high. This was because lower traffic levels also resulted in lower sale prices.

Affiliate marketing is still popular but it seems from the sites I analyzed Clickbank isn’t as popular as it once was and sites monetized with offers from what are traditionally known as CPA Networks seem to be on the rise.

E-commerce had by far the highest average RPM at $625, but this was skewed by several sites doing extremely well. The top 3 sites has RPMs of over $1,000, so were earning more than $1 per visitor. The best was earning over $7 per visitor.

There is no doubt that with a Shopify store and the right products, the world is your oyster.

There is no doubt that with a @Shopify store and the right products, the world is your oyster. Click To Tweet

The problem for many sites seemed to be scaling up the traffic. I suspect this is because there is a lot of competition in several niches and only so many Facebook customers to target. Over a third of the sites were in the apparel niche.

The median break even Cost per Click figure was 22c. To generate the profit needed, you would have to be getting traffic at less than 11c, not easy on Facebook if there is a lot of competition.

If you can find a unique product and identify the right target, then e-commerce could be the perfect add on for your blog.

All hail the king of online incomes.

Amazon FBA (Fulfilled by Amazon, which means you send your products to Amazon and they sell and deliver them for you).

It’s no surprise really as anyone who is on the Amazon store is in buying mode.

Now before you all shout, “but this doesn’t have to do with blogging,” there is nothing stopping you from replacing your best selling Amazon Associates products with your own FBA products. So for example, if you had an Amazon Associates site reviewing cat beds and you are selling a few a day, it’s very possible to replace the top selling one with your own version.

You can source the same products on Alibaba for $4 that are selling on Amazon for $30.

Don’t think it would work? Compare the Amazon Associates RPM of $104 with the Amazon FBA of $587.

The conclusion to this report is simple: choose your monetization wisely. It will not only impact how much you earn but also how much you can sell your site for in the end.

To get all the raw data click on the link below and get access to the original spreadsheet.