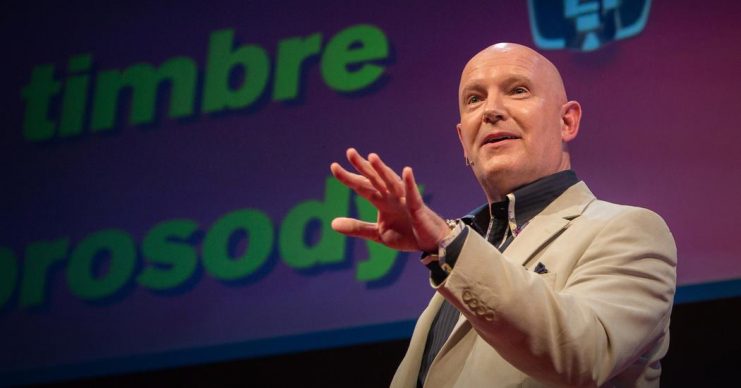 I recently spoke to Julian Treasure. He’s a five-time TED speaker on the power of sound. Guess which of his five talks has the highest viewership?

If you’re paying attention, you’ve already noticed that one presentation title matches the headline of this article. Yes, his talk on speaking has three times the viewership (nearly 10 million) of his other talks on listening and sound.

People are so enthralled with the thrill of speaking that they lose sight that listening is a much more powerful business tool than speaking.

But since you’ve come this far, I’ll share Julian’s tips for speaking so that people want to listen.

In his TED talk, Julian advises people to remember the word “hail.” It stands for:

He says, “The H, honesty, is being true in what you say, being straight and clear. The A is authenticity, just being yourself. The I is integrity, being your word, actually doing what you say, and being somebody people can trust. And the L is love, (in the sense of) wishing people well.”

That said, Julian cites three types of advantages you gain by becoming a skilled listener:

READ ALSO:  The Top 10 Best Universities in the United Kingdom

The problem, of course, is that most people are not good at listening.

Julian argues that “this devaluing of listening is handed down from generation to generation. There are many children who don’t have the experience of being listened to by their parents. If we’re not listened to, then that doesn’t create a desire inside us to listen to others. Societally, we don’t value it. As parents, we tend to be in Tell rather than Listen mode.”

You should recognize that speaking is a waste of time unless someone is present and prepared to listen. Both Julian and I wish that people would spend more time practicing to listen than to speak.

The best teachers, sales professionals, and leaders are great listeners.

But there’s a catch.

No one listens in the same way that you do. It’s easy to know what you want to say, but hard to anticipate how another person will listen.

Julian explains, “Everyone’s listening is unique. We listen through our own filters, and we form different meanings as a result.”

That is, you have different beliefs, attitudes, fears,  experiences and aspirations than I do. So if we both listen to the same sounds, we will pay attention differently. You might not even notice the phrase that grabs my attention, and vice versa.

If you need a bit more motivation to become a better listener, consider this. In his TedxAthens talk, Julian walked onstage and said, “Listen.”

Then he was silent for a few seconds.

He then explained, “That’s the wonderful sound of about 1,500 people consciously listening. It’s also the sound of democracy… because conscious listening is what permits us to live in a democracy.”

Nearly everything we treasure is the result of listening, such as democracy, freedom, free enterprise, compassion, and innovation. Yet listening remains one of the most undervalued and under-appreciated of all skills.

Fortunately, you can change that. Just set your mind work at listening as hard as you work to master any other skill that is vital to your career and livelihood.

Special thanks to Julian Treasure for taking the time to speak with me. He is founder and chairman of The Sound Agency, a U.K.-based audio branding consultancy.