The Most Interesting Facts About Ghana. Ghana, officially the Republic of Ghana, is located along the Gulf of Guinea and the Atlantic Ocean. The word Ghana means “Warrior King” in the Soninke language. With these 50 interesting facts about Ghana, let’s learn more about its: history, culture, geography, people, economy, food, traditions and more.

The Most Interesting Facts About Ghana

Facts about culture and tradition (One Of The Most Interesting Facts About Ghana).

#1. One Of The Most Interesting Facts About Ghana,  is Culture and tradition of the Ghanaian people of West Africa are mixed especially due to the fact that the country boasts of several tribes that uphold their different cultural orientations as well as their varied ways of life. In as much as there is a multiplicity of different ethnic groups, the culture is overall unified and as such, Ghana has enjoyed political stability in the region even after the post-Colonial era.

#2. Traditionally, Ghana as a nation was divided into three different castes namely, royals, commoners, and slaves. Up to date, the traditional class stratification is still recognized although slavery is not prominent in today’s Ghana.

#3. Polygamy is legal and people do not have a problem with the polygamous families in so far as the breadwinner can sufficiently provide for the families. However, marrying more than one wife is most often than not a reserve for the wealthier as well as powerful members of the society.

#4. Traditional practices on widow inheritance are still prominently practiced in that a widow is expected to be married by a living brother of the late husband and as such assume full responsibility for the children left behind as well as his new wife.

#5. Generally, Ghanaian culture lays more emphasis on being hospitable to everyone in the society, practicing good manners in every setting as well as respect for everyone.

#6. In as much as Ghanaian culture and traditional beliefs are found to vary from one ethnic group to the other, the Akan religious practices laid more emphasis on ancestral intercession coupled with beliefs in other gods, spirits, and goddesses.

#7. With time and changes taking place in the world today, Ghana has not been left behind in that Christianity has influenced most of their traditionally held beliefs and many people today are found to abandon polygamy and practice monogamy which is a widely held belief practiced by Christians.

#8. Ghana uses English as their official language which however has a distinctive West African Accent.

#9. Akan is the most popularly used language in Ghana after English spoken by nearly 67.1% of the inhabiting people.(One Of The Most Interesting Facts About Ghana).

#10. In Ghana, it is a traditional practice that seasons like harvesting have to be accompanied by ceremonies. Other popularly celebrated ceremonies are like the age ceremonies for girls which take place before marriage or giving birth.

Facts about Ghana’s history (One Of The Most Interesting Facts About Ghana).

#12. The country was named after the medieval empire of West Africa which initially was Wagadugu.

#13. Some of the people found living in Ghana today are believed to have ancestors linked with medieval Ghana especially people from the Northern region.

#14. Ghana before 1957 was commonly known as the Gold Coast due to the availability of gold along the rivers Ankobra and Volta.

#15. The gold availability in the region created vested interests between the British, Portuguese resulting to rivalry in 1482.

#16. After the World War II, educated Ghanaians thought it wise that they could seek independence of their country and liberate themselves from oppression.

#17. The war veterans were prominent taking forward the struggle for liberation with the notion that colonization was a form of oppression. They began fighting it.

#18. In the year 1945, during a meeting in Manchester attended by Kwame Nkrumah, serious concerns on independence were raised giving way to Pan-African consciousness.

#20. Kwame Nkrumah became the first president of independent Ghana after they gained independence in 1957. (One Of The Most Interesting Facts About Ghana).

Ghana facts for kids (One Of The Most Interesting Facts About Ghana).

#21. Most Ghanaian people dress in brightly colored clothing preferably made of silk.

#22. Ghanaians enjoy dancing, playing the drums and like food.

#23. Ghana has enjoyed periods of both war and peace even after independence.

#24. The terrain in Ghana is mostly of low-lying plains with notable hills well distributed throughout the country.

#25. People in Ghana mostly speak English though other native languages are widely spoken like Akan, Ewe, Ga and Moshi-Dagomba.

#27. Literacy levels are high in Ghana with 76.6% of the people having the ability to read and write.

#28. Religiously, Ghana has Christians and Muslims as well as some other few local religions.

Several major civilizations flourished in the general region of what is now Ghana. The ancient empire of Ghana (located 500 mi northwest of the contemporary state) reigned until the 13th century. The Akan peoples established the next major civilization, beginning in the 13th century, and then the Ashanti empire flourished in the 18th and 19th centuries.

Called the Gold Coast, the area was first seen by Portuguese traders in 1470. They were followed by the English (1553), the Dutch (1595), and the Swedes (1640). British rule over the Gold Coast began in 1820, but it was not until after quelling the severe resistance of the Ashanti in 1901 that it was firmly established. British Togoland, formerly a colony of Germany, was incorporated into Ghana by referendum in 1956. Created as an independent country on March 6, 1957, Ghana, as the result of a plebiscite, became a republic on July 1, 1960.

Premier Kwame Nkrumah attempted to take leadership of the Pan-African Movement, holding the All-African People’s Congress in his capital, Accra, in 1958 and organizing the Union of African States with Guinea and Mali in 1961. But he oriented his country toward the Soviet Union and China and built an autocratic rule over all aspects of Ghanaian life. In Feb. 1966, while Nkrumah was visiting Beijing and Hanoi, he was deposed by a military coup led by Gen. Emmanuel K. Kotoka. (One Of The Most Interesting Facts About Ghana).

6 places to visit in Ghana 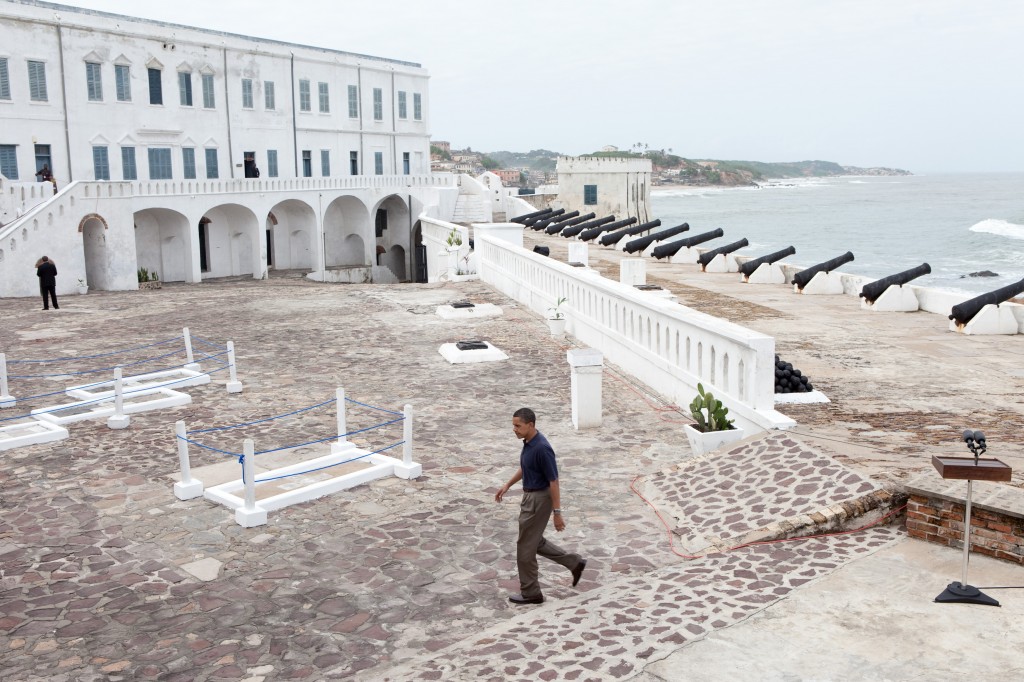 Ghana’s Atlantic Coast is lined with old forts (castles) built by various European powers during the 17th Century. The Cape Coast Castle was built for the slave-trade and is one of the most impressive of Ghana’s old forts. It was originally built by the Dutch in 1637, later expanded by the Swedes, finally the British took control of it in 1664 and turned it into their colonial headquarters. It stayed that way for the next 200 years until they moved the capital to Accra in 1877. 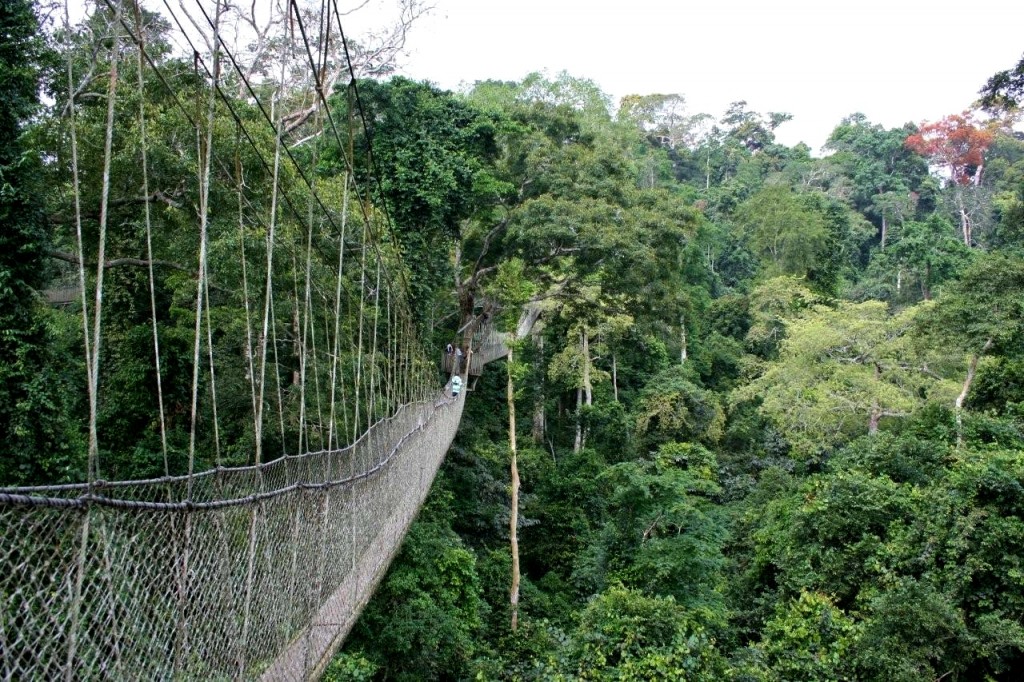 Kakum National Park is a dense tropical rain forest in southern Ghana. The forest is home to over 40 species of larger mammals including forest elephants, forest buffalo, Mona-meerkats and civets. The bird life is fantastic as well with over 250 species living in the forest. The highlight of any visit to Kakum, is a stroll on the Canopy Walkway that is built 30 meters above ground, crosses several bridges and is over 1000 feet (350 m) in length. The canopy walkway offers a unique viewing perspective of the wildlife and unique plants of the forest. Trained guides are on hand to take you on a tour and provide detailed insight into the medicinal uses of the forest plants. There’s a basic campsite for those who want to overnight. 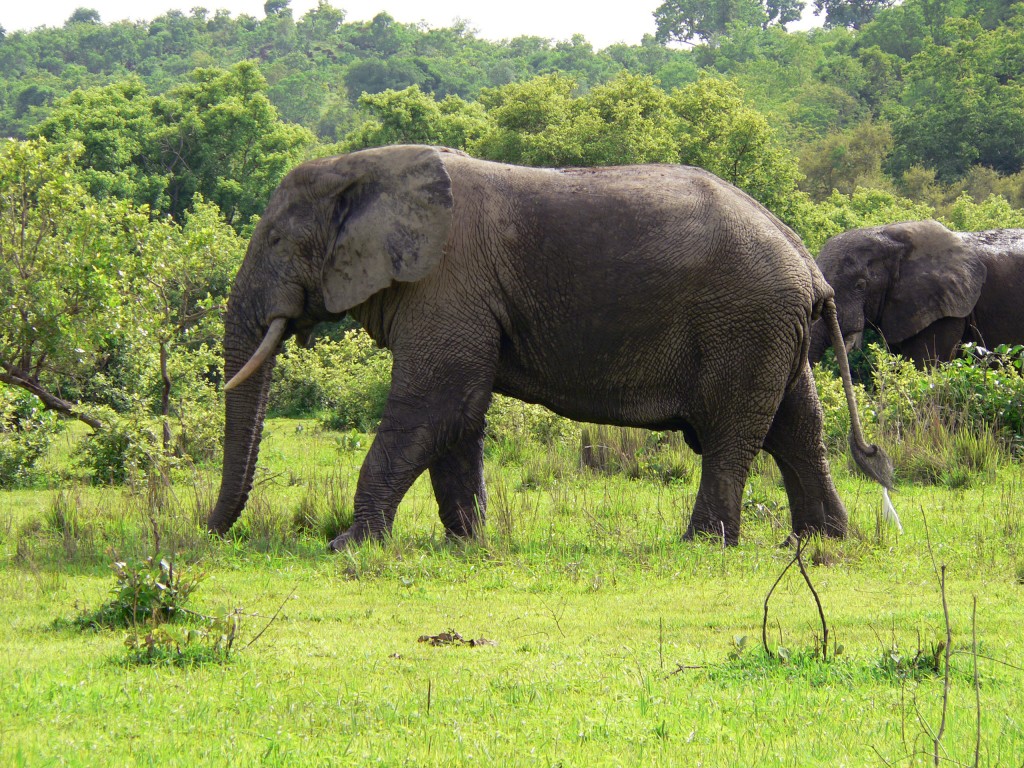 Mole National Park is Ghana’s largest wildlife park and is located in north western Ghana. In Mole you can expect to see buffalo, roam antelope, elephants, warthogs, hyenas and if you’re very lucky, leopard. Lions have recently been re-introduced to the park as well. There are also more than 250 species of birds to enjoy. You can opt for a walking safari or a traditional game drive accompanied by an armed guard. There’s a motel just near the park headquarters. The best time to spot wildlife is during the dry season from January to March as animals congregate around the water sources. Mole can be reached by public transport, note the roads are not in great condition. Do visit the Larabanga Mosque near the park, the oldest mosque in Ghana.

READ ALSO:  The women paid to cry at the funerals of strangers in Ghana 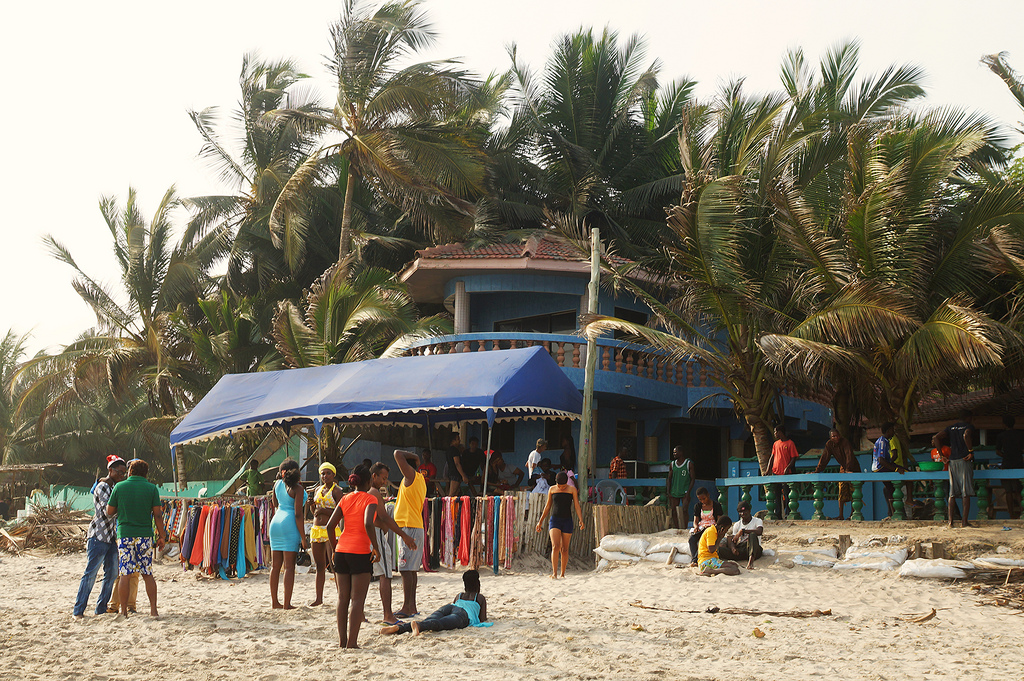 Ghana has some lovely beaches but the most popular for the last decade has been the beaches around Kokrobite including Langma. Kokrobite is a quick 20 mile (30km) tro-tro ride away from the capital Accra. One of the main attractions here is the excellent Academy of African Music and Art (AAMA) founded by master drummer Mustapha Tettey Addy. The Academy attracts drummers and dancers from all over the world. You can get accommodation at the Music Academy or head to Big Milly’s Backyard in the village (also on the beach). Big Milly’s has a friendly bar and restaurant where backpackers, volunteers and Ghanaian Rastafarians chill out.

Kumasi is the former capital of Ghana’s Ashanti Kingdom in southern-central Ghana. Kumasi is Ghana’s second largest city with a population of around 1.5 million. The Ashanti are famous artisans, their gold jewelry and trinkets are famous throughout the world, as is their Kente cloth and wood-carved stools. You can see examples at the National Culture Center as well as various craft villages on the outskirts of Kumasi. The bustling Kejetia Market is worth visiting, the Kente cloth is good value here if you can stomach the chaos. If you’re interested to see how the Ashanti Kings used to live, check out the Manhyia Palace Museum. You can meet the current Ashanti king here, he makes an appearance to greet the public every 42 days.

Busua is one of Ghana’s best beaches and offers the visitor a chance to relax, paddle around in the Atlantic and enjoy some lobster. There are several hotels along the beach front ranging from luxurious to simple. The Busua Beach Resort is a modern, large hotel with dining facilities, pool and beach chalets. The more intimate Busua Inn is run by a French couple. The bar/restaurant on the beach serves excellent French food. The African Rainbow resort is a small family run hotel with 12 rooms, reasonable rates include breakfast. If Busua is too touristy for you, check out Princess Town a little further to the west along the coast.