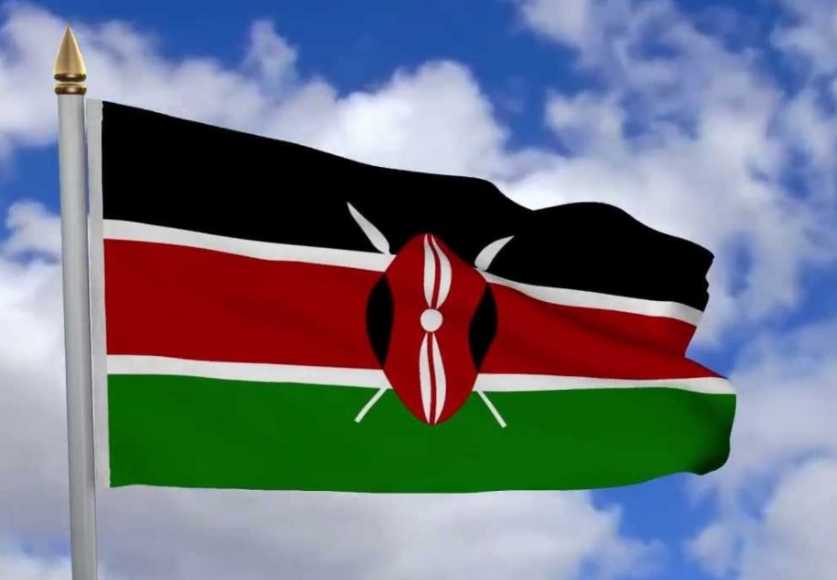 Kenya Flag: The Meaning, Designer And Symbolism Of Its Elements – The Kenya flag known as ‘Bendera ya Kenya’ in Swahili was adopted in December 12, 1963. Kenya also became independent on the same date.

It was largely influenced by Kenya’s pioneer political party, Kenya African National Union (KANU). Until their defeat in 2002 elections, KANU ruled successively as the sole Kenyan political party for 40 years.

Worthy of note is that the Kenya African National Union party led the fight for freedom and independence in Kenya.

Prior to the 2002 election, the party split into 2 factions, hence the creation of National Rainbow Coalition (NARC) under whose umbrella, Mwai Kibaki won the elections.

The party’s flag is of great resemblance with the Kenyan flag. The only difference is the different emblems used on them.

KANU’s flag has 3 equal horizontal rectangular design of black, red and green respectively. While there is an emblem of a white cockerel at the centre of the flag, the national flag has the Kenyan traditional Masaai emblem. The rooster at the center of the shield symbolizes the dawn of a new day.

Marking the nation’s independence in 1963, KANU wanted to automatically make the party’s flag the national flag. Incidentally the Justice and Constitutional Affairs minister at the time, Thomas Joseph Mboya countered the attempt. Thus the slight change in both flags.

Kenya’s national flag is also one of the African flags that takes after the Ethiopian and the pan-African flag.

READ ALSO:  A look at deposed African leaders and where they are now

The national flag is a symbol of authority. So much so that it has its place in all Kenyan Military Flags. It is positioned usually at the top left hand corner of the flag.

The Defense Forces Flag; Air Force Flag and the Naval Ensign of Kenya, all have a miniature of the national flag on them.

The national Kenya flag has 4 colors: black, red, green and white designed in bright and vibrant shades. The various designs in the flag depict the history, present, prospects and potentials of the country.

It is the symbol of pride and unity for the east African country that just concluded its general elections.

The most striking part of the flag is the symbol of Maasai warrior’s shield imposed at he center. On the shield also are 2 spears crossed on it.

Being representations of Kenya’s traditional war items, the emblem gives the bright colored flag a stamp of authority. Beyond the artistry, it sends a territorial message of defense from Kenya to the world.

According to Famous Wonders,

“The flag of Kenya symbolizes that the country is strong against colonizers. It can be an intimidating sight to see because of the power the flag enforces in Kenya. The shield that is shown across the flag shows that the people in Kenya are a force to be reckoned with.”

Kenya’s flag was designed with a scale proportion of 2:3. The name of the designer is not known. The year of the design is speculated to be during the course of the fight for independence since it was drawn from KANU, the political party credited with the independence victory of Kenya.

READ ALSO:  Doing Business in Africa: Ten Things No One Ever Told You

The ensign is divided into 3 horizontal and parallel stripes. The tricolor stripes are equal in length and width.

The top most stripe is black; followed by the middle red stripe and then the green colored stripe at the bottom.

Bothering the red parallel stripe are 2 thin white stripes at the top and bottom. The 2 white fimbriations and the Maasai shield were added upon the nation’s independence.

At the center of the flag is the image of a tricolor (black, red, and white) traditional Maasai shield and two white spears. The Maasai shield has a red color with black flanks, 4 white charges and a white disk in middle.

Color specification used on the flag are described thus:

The black color in the flag represents the people of the Republic of Kenya; red stands for the sacrifices and bloody price of their freedom; while green stands for fertility and the country’s natural wealth. Agriculture is one of the major booster of the Kenyan economy.

The Maasai shield and 2 spears stands for defense for freedom, while the white fimbriations symbolizes peace, unity and honesty.