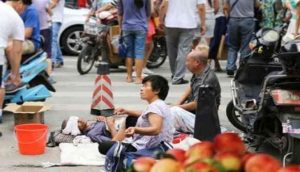 Meet this professional beggar who earns in lakh and lives a luxurious life. In China, a unique beggar has been found, who is reportedly earning Rs.1 lakh per month. Not only this, the children of this richest beggar studies in the biggest and expensive school in a city of China. In 2014, the pictures and news of this beggar was appeared on Chinese microblogging site Weibo and is now becoming very viral on social media.

However, the pictures of this beggar and his tremendous earnings are discussed in detail and he is being described as a professional beggar who earns $ 1,700 (i.e. around one lakh rupees) in the month, but there is no clear evidence about his means of earning yet.

This beggar looks pathetic only when he begs, or else seeing his life style, nobody can consider him as a beggar. His children lives a good life and are in city’s expensive school and besides this he lives in a magnificent two-storey building in Beijing. He can not count his money alone so he also takes help from other people. For this help, he gives them 100 yuan, which is equivalent to about 900 rupees in tip. It has also come to know that he also goes to a decent dinner in a luxurious and expensive restaurant.