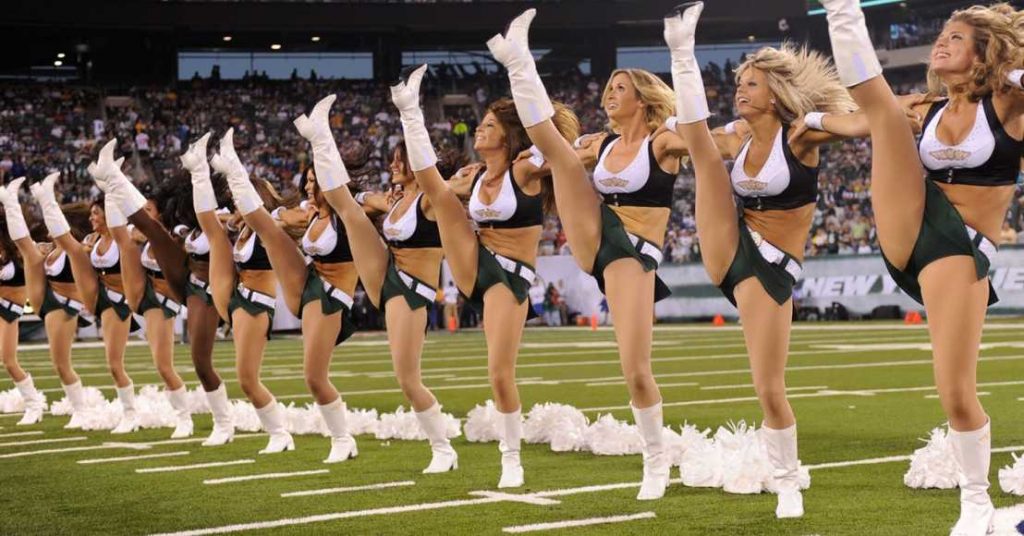 NFL Cheerleader Salary – Average NFL Cheerleader Salary? The Average Salary of NFL Cheerleaders – Being an NFL cheerleader looks like a great job. The girls get paid to look good and dance around, supporting some of the most popular sports teams in America. But just how much they get paid is one of the NFL’s best kept secrets. You would think that teams that generate hundreds of millions of dollars of revenue each year would be able to generously compensate their cheerleading squads. In reality, these girls get paid next to nothing. In fact, they’d be financially better off serving beer at the nearest concessions counter.

See also: The 14 Best Careers If You Have No Education

Incredibly, while NFL players are getting paid thousands (if not tens or hundreds of thousands) of dollars per game, cheerleaders are generally paid about $70 to $90 per game. Now, you’re probably saying, well of course, these are elite athletes we’re talking about. Let’s put this into perspective, shall we? A player on an NFL team’s practice squad makes around $100,000 for the season. These players never set foot on the field during a game. Still, over a 16-game season, they make $6250 per game. Some cheerleaders are paid monthly salaries ranging from $1000 to $1,500 with the higher end of the scale being reserved for those with extensive cheerleading experience.

After two preseason games and eight regular-season home games, most cheerleaders earn about $500 to $750 per season, depending on which team they cheer for and whether that team plays any additional home games in the playoffs. The New Orleans Saints are paying Drew Brees $40 million this season. Ok, that’s not fair, Brees is the highest-paid player in the league this year. Some more perspective: NFL mascots get paid anywhere between $23,000 and $65,000 per year, and that’s not including benefits or yearly bonuses (which can be substantial if the team wins the Super Bowl). Cheerleaders see nowhere close to this amount of salary, and in most cases have to dress up in even crazier outfits.

With approval from squad coordinators, NFL cheerleaders can make extra money by participating in paid public appearances. These are outside the usual non-paid public appearances that NFL cheerleaders must participate in throughout the year. Like NFL players, cheerleaders need to invest lots of time and effort into perfecting their art. Gruelling practices that can last up to six hours are routine, as are 12-hour game days. All that for less than you would get for working at McDonalds. It’s a high-pressure, high-stress, tournament-style industry that accepts only perfection for little in exchange. Cheerleaders are also at a constant risk of injury, as their high-flying stunts are not only breathtaking, but incredibly dangerous.

While the salary of an NFL cheerleader is nothing to live on, the elite experience of being an NFL cheerleader can lead to other jobs that pay much better. Cheerleaders can use the social network provided by being an NFL cheerleader and doing appearances, to find higher paying jobs outside of cheerleading. Still, something doesn’t add up. These girls find themselves at the crossroad between two multi-billion dollar industries with little to show from either side. The cheerleading industry in the United States has grown tremendously since the first appearance of cheerleaders in the NFL during Dallas Cowboys games in the 1960s. Lobby groups are trying to get cheerleading acknowledged as an Olympic Sport and The Cowboys have their own reality show on the Cheer Network. In fact, it’s estimated that The Cowboys’ cheerleading squad brings in over $1 million to the team per year through things like annual swimsuit calendars and expensive cheer-training camps.

A Little Something to Cheer for

A former San Francisco 49ers Gold Rush cheerleader and television star Teri Hatcher was at one time being paid $390,000 per episode for her role in “Desperate Housewives.” She represents the precious few who are able to use their cheerleading experience to create real wealth. For the vast majority of the girls struggling in this backwards industry, they are stuck working long hours at a job that is wrongly considered by many to be a “hobby” rather than an actual profession.