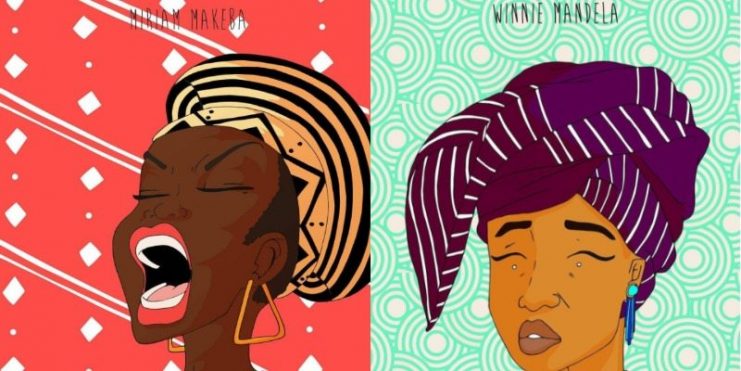 Queens Of Africa: The Women Who Have Shaped Africa – Onyinye Iwu’s Instagram, @Only_Onyi, is her personal page where she shares her beautiful illustrations that often celebrate women and Africa. Last year, she brought this two together to celebrate African women in a series of illustrations that she dubbed Queens of Africa.

With Queens of Africa, Onyinye Iwu highlighted the important and often game-changing lives led by some of our mothers through history that has enabled us to travel to where we currently are today as a continent.

The women featured in Iwu’s Queens of Africa have all made spectacular contributions to helping their nations or standing up for the rights of the women.

We look at the beautiful women and illustrations that made up the Queens of Africa movement. Here they are below;

It would be hard not to praise Funmilayo Ransome-Kuti as one of the Queens of Africa. As a teacher, a political leader and women’s rights activist who was also the mother of Fela Kuti, the effects of her activism is still felt in Nigeria today.

She founded the Federation of Nigerian Women Societies in 1953 and they campaigned against injustices for women and fought for female education, provision of healthcare and social services for women.

On the list of Queens of Africa is the Anti-colonial, freedom fighter and Queen Mother of Ejisu (Ashanti Empire, modern Ghana). Asantewa who was the keeper of the Golden stool refused to give it up at the behest of the colonial governor. Instead, she protected the sacred Asante symbol and led her people to fight the British in 1900.

It took 2000 British troops to capture this brave woman who said;

“If you, the men of Asante, will not go forward, then we will. We, the women, will. I shall call upon my fellow women. We will fight! We will fight till the last of us falls in the battlefields.”

To date, Queen Nefertiti is an icon of timeless beauty and power. As wife to Akhenaten, she led worship, drove chariots and defeated enemies. She was actually instrumental in initiating a religious revolution, which called for monotheistic worship of the sun god, Amen –Ra.

A living legend! Winnie Mandela was South Africa’s first black social worker and although she is most known for her marriage to Nelson Mandela, she was a great politician and anti-apartheid activist.

Her many scandals in later years are not enough to wipe out all the years of work she spent fighting to end South Africa’s oppressive policies and she will always be remembered for that.

Queen Amina was the legendary Hausa Queen of Zaria. She took over from her mother as queen and learned military skills from warriors to the point that she was recognized as the greatest warrior of Zaria’s cavalry.

In her time she expanded Zaria’s domain to its largest in history and forced local rulers to accept vassal status and permit Hausa traders safe passage.

The mother of the great King of Zulus, the great Shaka, would definitely be one of the Queens of Africa. She gave birth to Shaka while unmarried and became was shamed greatly for it. She, however, devoted her life to raising her children and Shaka an easy example of her devotion declared the longest mourning period in Zululand when she died in 1827.

The first ‘Iyoba’ or ‘Queen Mother’ of Benin. The title was given her by the 16th Oba of Benin, her son, who ruled in the early 1500s. A great warrior during and after her son’s reign, it was in her time that the traditional killing of the Oba’s mother at the ascension of a new king stopped.

For this reason, she was the first royal ruler to witness ties between Black Africa and the Europeans.

The ruler of Ndongo and Matamba who changed the face of Angolan history in the seventeenth century and is remembered for her governance of the kingdom. Queen Njinga took over after the death of her brother and with a knowledge of trade and religious issues resisted Portugal’s colonialist aspirations until her death in 1663.

Yennega was the daughter of the King of Gambaga (present day’s northern Ghana). She ran away from home when she tired of her role as chief warrior and met a young elephant hunter in the forest. together they had Ouedraogo. Yennega is Burkina Faso’s national emblem, personifying independence, and freedom.

Wangari Maathai was the first woman to obtain a Ph.D. in East and Central Africa. The environmental and political activist founded the Green Belt Movement in 1977, an environmental NGO focused on environmental conservation and women’s rights.

When Kenya returned to multiparty democracy in 2002 she was elected as a Member of Parliament as the Assistant Minister in the Ministry for Environmental and Natural Resources. In 2004 her enviable legacy was celebrated with a Nobel Peace Prize for her contribution to sustainable development, democracy, and peace.

READ ALSO:  Amazing African Gods No One Talks About ✔

The last in Iwu’s line of Queens of Africa is Taytu Betul the Empress of the Ethiopian empire during colonialism. She was the wife of Menelik II, King of Shewa.

She founded Ethiopia’s capital city, Addis Ababa, and assisted in the modernization of the country which opened up opportunities for trade and new technologies. This was after seasons spent protecting Ethiopia’s borders during negotiations and heading an army at her husband’s side.

Even after her husband’s death, she looked after Ethiopians in the diaspora by providing housing and places of worship for communities outside of the country.