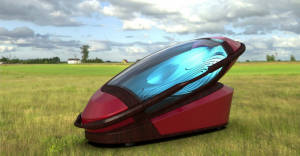 ‘Sarco’ Death Pod That Lets Users Kill Themselves Showcased. A 3D-printed euthanasia device that will assist users to kill themselves was displayed for the first time on Saturday (April 14) during a funeral fair in Amsterdam. Dubbed ‘Sarco,’ short for sarcophagus, the model was revealed alongside a virtual reality (VR) demonstration which let attendees experience the pod in action.

The Sarco provides death by hypoxia, or low levels of oxygen, and is designed to be portable. It will come with a built-in detachable coffin and its inventors claim that a fully-functioning version will be built this year, after which the blueprints will be made open source and published online for anyone to access and download.

“In many countries suicide is not against the law, only assisting a person to commit suicide is,” Nitschke told Agence France-Presse (AFP) at the event.

“This is a situation where one person chooses to press a button rather than for instance standing in front of a train. I believe it’s a fundamental human right [to choose when to die]. It’s not just some medical privilege for the very sick. If you’ve got the precious gift of life, you should be able to give that gift away at the time of your choosing.”

According to AFP, the funeral fair drew a crowd of thousands but the device had a mixed reception. “I think it’s quite silly,” Rob Bruntink, 52, told the news agency.

A press release that was published prior to the weekend funeral event stated: “The Sarco will sit on a generator using liquid nitrogen. To activate Sarco, a person would step inside, lie down and, when ready, press the button. While being very peaceful, the hypoxic death will also have style and elegance.

In an op-ed published in The Huffington Post this year, Nitschke explained how the suicide machine is intended to work. He said that all potential customers would have to fill out an “online test” to judge their mental fitness. If they pass the examination, they will be given a code to the Sarco that is valid for 24 hours.

From there, the user enters the code and the final death process begins. The creator said that “liquid nitrogen in the generator is released, rapidly bringing down the oxygen level in the capsule.” Nitschke claimed it was painless, stating: “Within a minute, the user loses consciousness; death comes a short time later.”

But he conceded: “The Sarco will not be for everyone, that’s clear.”

In the U.S., the National Suicide Prevention Lifeline provides 24/7, free and confidential support for people in distress, prevention and resources for you or your loved ones, and best practices for professionals. You can reach it via: 1-800-273-8255. In the U.K., you can contact the Samaritans on: 116 123.