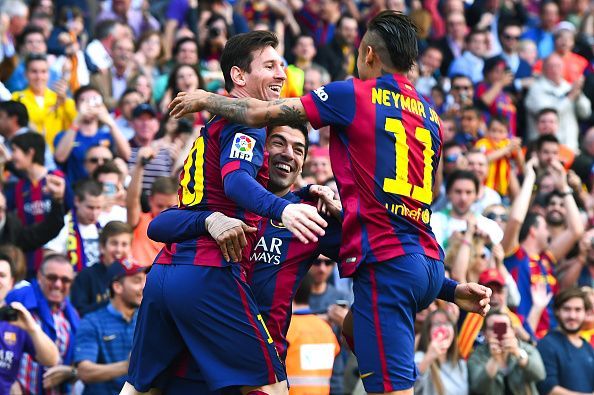 The Argentine is the undisputed best player in the world. Despite the fact that Cristiano Ronaldo is the reigning Ballon d’Or winner and is almost certain to win it this year as well, the ability of the Barcelona number 10 is above and beyond the reach of any player in the world.

Barcelona can literally lay down the floor for him and ask him to use them as a carpet to walk on so that his feet don’t touch the ground – such is the adulation he receives from the club. But one can only wonder whether this is a good thing after all.

For one, La Pulga’s undeniable influence on the Blaugrana team has made it very difficult for them to have another star. There can only be one king in the country, so keeping a player of Neymar’s calibre was always going to be hard.

At Real Madrid, Barcelona’s bitter rivals, every player accepts the fact that Cristiano Ronaldo is the undisputed star of the team and they are all subordinates to him in terms of brand image. At Barcelona, however, both Neymar and Lionel Messi had distinctive brand images, respectively, and it was only inevitable that Barca would eventually be able to keep just one of them.

However, what Barca didn’t expect was that moment would come this early. They expected Neymar to take over once age catches up with Messi. It was only last year that he signed an extension – where, it must be said, Barca missed a trick and kept his release clause at only €222 million – and now he leaves the club where he was supposed to take over from Messi and become a legend.

Which brings us to the question: should Barcelona have sacrificed Lionel Messi instead?

How is this even a question, you ask. How could I dare to even ask a question that suggests sacrificing the greatest ever player of Barcelona to keep someone like Neymar, who – according to many – left for money?

Only recently, Lionel Messi signed a contract worth €565,000 per-week at the Camp Nou. Barcelona president, Josep Maria Bartomeu, admitted that while this puts Barcelona’s wage above the recommended limit, it was worth it because Messi is the best player in the world.

Looking back to that now, one could almost feel that it was the beginning of the end for Neymar’s time at Barcelona followed by that 6-1 night against PSG where Neymar was the best player for Barcelona and yet it was Lionel Messi who stole all the limelight.

While there is no doubt that Lionel Messi deserves the pay that Barcelona offer him now, it would be interesting to see what Neymar would have done had he been given such a contract.

As much as we laud the Argentine, the truth is that father time catches us all at some point. Someday, time will catch up with the Argentina captain and tell him, ‘son, you have played a lot, it is time to rest now.’

Given that the Barcelona number 10 is 30 years old now, he has lesser years left in him than the 25-year-old Neymar. Indeed, the Brazilian has just entered the age where a footballer enjoys his prime years while Messi is in the final years of his peak.

Hence, changing the focus of the system around Neymar would have been an interesting prospect as it could have unleashed the full potential of the Brazilian.

After all the struggle Barcelona had to go through to bring Neymar – virtually sitting out of two windows, shady deals here and there, Sandro Rossell resigning and being jailed – to become the eventual successor to Messi’s throne, it begs the question: wouldn’t it have been wiser to bring the eventual future to the present by making Neymar sit on the throne now itself?

Also read: 5 players who fell out of love with their clubs after being linked to another

But then again, this is Lionel Messi we are talking about. Attackers have a limitation on what they can do and what they can’t, Messi, however, doesn’t. Well, almost. The Argentine is a God on the football pitch, drawing different dimensions with his left-foot as a paintbrush.

READ ALSO:  A Football God Is About to Become President ✔

When Messi is at his best, the football pitch – a plain lifeless fabric – becomes a tapestry. He might look fast, someone zinging past opponents with lightning-fast pace and mazy dribbles, but there is a slowness about him – a sense of patience rather – where he does things at his own speed.

In his mind, everything goes in ultra-slow motion. The normal beings, they would panic when they find such inner peace – such tranquillity – and lose their minds in it. They will try to force their way out it, they will scream, kick, jump, flail their hands and legs like an insane person.

They – the normal ones, like me and most probably you – will freak out and cry. But not Lionel Messi; he is no normal one after all.

Finding inner peace is something that requires ultimate diligence. One has to carve their way to it, there is no shortcut.

Swami Vivekananda was a saintly scholar, the best of his time, who preached the Vedanta philosophy all over the world. His teachings spread so far wide that it still resonates in the hearts of many and will continue to do so till the end of time.

When Swamiji was young and naïve, he pleaded his Guru – Sri Ramakrishna Paramhansa – to let him feel tranquillity. ‘You will when the time comes,’ was Paramhansa’s response. Undeterred, the young Swamiji kept insisting every day.

And it worked, Paramhansa became tired of his disciple’s repeated requests and gave into it. Ramakrishna, then, touched the crown of his student’s head and, being the divine man that he was, put Swamiji into a state of trance.

Swamiji became panicked by the oneness he felt with everything. He quickly begged the Master to bring him out of this stage and Paramhansa obliged before telling him, ‘now you know why I said your time hasn’t come?’

Also read: Kylian Mbappe is the only option for a smooth post-Neymar transition at Barcelona

So, you see, what Messi feels when his feet is attached with the ball is only paralleled by a few. Out of the pitch, Messi is a global star, an icon, a God to many, even. However, within the confinements of the football pitch, he is no longer a star – he is just a little kid who finds oneness with everything through football.

And how can you sell such a player?

Given that he has only just reached 30, Messi could still have 5-6 years left in him. Messi’s exception dribbling and scoring skills often make us overlook his playmaking and passing abilities. Not Luka Modric, not Toni Kroos, not Thiago Alcantara, but Lionel Messi is the best playmaker in the world. Once, not if, he shifts to the midfield, this will become apparent for all of us to see.

However, there is a slight chance that everything could go wrong and Messi falls into a decline within a couple of years while Neymar rules the football fraternity with PSG. Or, the Brazilian – another minute possibility – could lose his way and go on a downward spiral while La Pulga prolongs his career in midfield.

Which once again begs the question: should Barcelona have sold Messi to accommodate Neymar or were they right to keep him?

Also read: Why Is Barcelona Not Selling Messi? Find Out The Three Simple Answer!21st century explosion of the world-record transfer fee