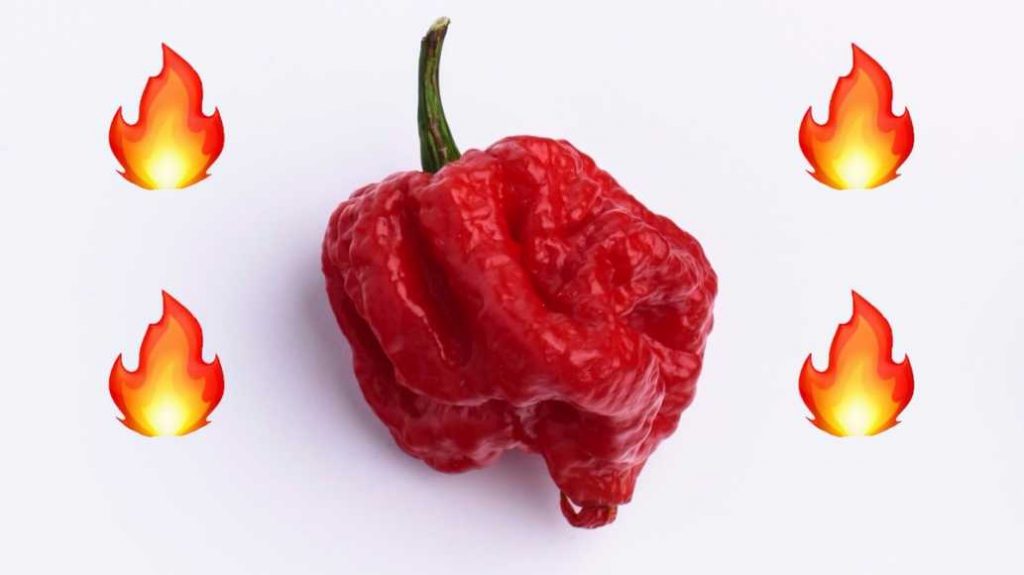 The Carolina Reaper is the hottest chili pepper on earth. It was bred by a man in South Carolina by crossing a ghost chili—the second hottest pepper in the world—with a habañero. It has a Scoville heat unit (the metric used to measure spice) of 1.6 million. For comparison, a jalapeño has a Scoville rating of 5,000, a habañero has one of 200,000, and the ghost chili comes in at 1 million.

There are far too many YouTube videos of people eating Carolina Reapers with disturbing results: Their faces redden and contort in agony, they start to swear, cough, and cry, and they often end up running or slinking away to throw up or lie down. In one particularly intense video, two girls shriek, spit, and jump up and down in pain. One girl croaks, “I can’t feel my tongue.” The other begins to cry, mascara streaming down her cheeks. The first girl throws up off-camera; the second has to be put on oxygen because of an asthma attack.

While these reactions are scary, they’re not life-threatening. However, a few rare cases have resulted in more serious consequences. In Turkey, two men had heart attacks after taking cayenne pepper pills for weight loss. More recently, a 34-year-old man in New York developed “thunderclap headaches” after eating a Carolina Reaper at a chili pepper competition. Doctors discovered that these severe sudden-onset headaches, which often predict a hemorrhage or a stroke, were caused by the constriction of several arteries in his brain, which they attributed to the chili pepper.

What the hell is happening to these people? And is there a real danger in eating extremely spicy food? “When you experience a hot chili pepper, it’s not a taste response, it’s a pain response,” says David Julius, a professor of physiology at UC San Francisco. The active chemical in chili peppers that gives them their fire is capsaicin. Capsaicin binds to heat receptors located on pain nerve fibers throughout your body, tricking your brain into thinking parts of your body are literally burning.

When you pop a pepper in your mouth and start to chew, these heat-pain receptors on your lips, mouth, and tongue are activated. The nerve fibers release chemicals that increase blood flow and cause inflammation, which is why your lips swell up. Your mucus membranes go into overdrive in an attempt to flush out the offending substance, causing your mouth and eyes to water and your nose to run—although you could also be crying from the pain. After you swallow, your throat begins to burn and you might start coughing or gagging.

These reflexes are a defensive response, says experimental psychologist John Prescott, author of Taste Matters: Why We Like the Foods We Do, as well as more than 80 journal articles on the science of taste and flavor perception. Prescott says that, “It’s the body basically saying, get this stuff out of me.” At this point, if you’ve eaten a hot pepper, you’re probably feeling pretty hot as the activation of the heat receptors makes your brain think the temperature is rising. In response to the heat, your body tries to cool itself off by sweating. Blood vessels on the surface of your skin dilate in an attempt to push the heat out, making your face and chest appear flushed.

“The body temperature will drop quite markedly,” when you activate the nerve fibers, Julius says. “The brain gets a signal that it’s hot outside, [and] these sympathetic reflexes get elicited by that input to the brain to initiate cooling responses.”

As the pepper moves through your stomach and intestines, the pain and inflammation follow it. You might feel like you’re going to vomit. Mucus production in your gut ramps up in a final attempt to purge the offending substance out the other end as fast as possible, ultimately resulting in diarrhea. Unfortunately, pain fibers are even “present in other places that we don’t talk about politely,” Prescott says, “you know, the day after the chili hits.”

So what about the extreme, life-threatening reactions? Meredith Barad, a neurologist at Stanford who specializes in headaches, says that a reaction like the New York man’s is not common. “This is a case report, it’s a one-off. I’m not sure this is generalizable to anyone else besides this one unique person,” she says. Barad says the study is “mildly interesting” but isn’t something doctors or scientists are getting worked up about.

In fact, many of the same effects that are damaging at high doses are actually beneficial in low doses. Eating chili peppers, for instance, has been linked to a lower risk for mortality, possibly by improving blood flow. What’s more, research in mice suggests that capsaicin could help prevent cancer or shrink tumors in the gut. Hot peppers could also be a potential weight loss aid as your body’s efforts to cool you down burns extra calories. Capsaicin also appears to act as an appetite suppressant, perhaps because of some of the not-so-pleasant effects in your gut.

Capsaicin patches and creams are also approved for pain relief, particularly chronic nerve pain. Applying capsaicin directly to the skin in high doses can overwhelm the receptors, numbing or damaging the nerves so that they no longer release inflammatory chemicals or send pain signals to the brain. “Paradoxically, even though it might generate some momentary burning,” Julius says, “it could lead to a longer lasting analgesia for certain types of irritancy or pain.”

Overall, experts agree that if you eat spice in moderation, you’ll likely be fine. And for those times when you over-do it, have some full-fat dairy on-hand. Capsaicin is fat soluble, so yogurt or milk really can help absorb the chemical and provide you with some relief.