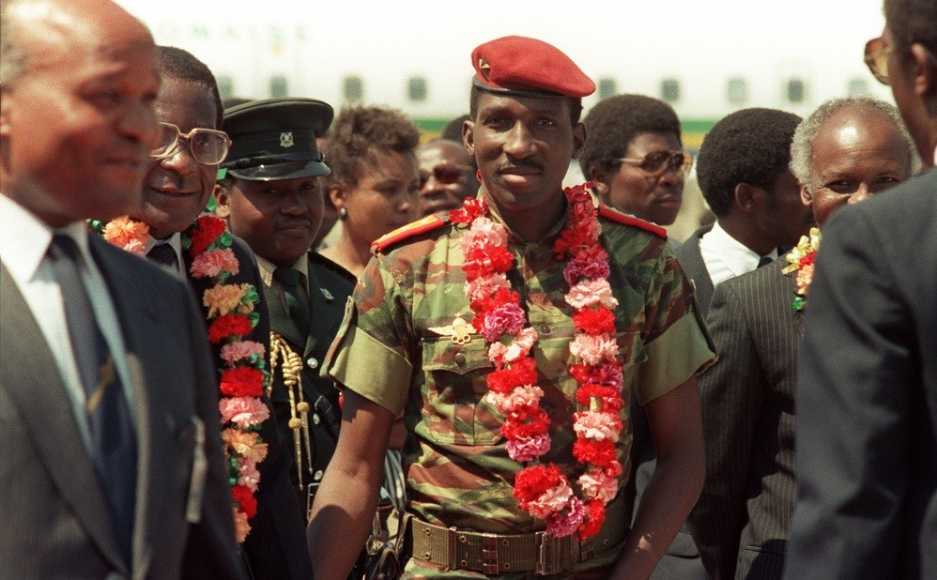 Sankara was indeed a disciplined and true Africa leader whose focus was on Burkina Faso, his home country.

From being appointed as Secretary of State for Information in the military government in September 1981, Thomas’ next political position was the presidency on the 4th of August, 1983, at the age of 33 years. He overthrew a controversial tyrant, Jean-Baptiste Ouédraogo and took over leadership which lasted for 4 years.

His political interests were influenced by the works of Karl Marx and Engels Lenin. Thomas was a radical social changer. Over 3 decades, and Sankara remains one of Africa’s Youngest And Most Devoted presidents in history.

Here Is Everything You Need To Know About The Freedom Fighter:

Thomas Isidore Noël Sankara was born on December 21, 1949, Yako, French Upper Volta. The iconic African leader was born into an average Roman Catholic family of 10 children. Thomas was the 3rd child of Joseph and Marguerite Sankara.

His father was a World War II veteran.

Growing up, Thomas was a bright young man with so much potentials. He had an appealing character that was hard not to notice. So much so that his parents hoped he would become a priest.

READ ALSO:  Kenya Flag: The Meaning, Designer And Symbolism Of Its Elements

The intellectual who loved reading made his choice to serve humanity via the military.

By the year 1966, Thomas Sankara had concluded his basic military training. His military career literally kicked off at the age of 19.

On an official order, he made a trip to Madagascar to participate in an officer training program at Antsirabe.

It was here that Thomas Sankara witnessed several uprisings which informed his political views. Thomas voraciously read books on history and military strategy. Thomas was not always the serious “super-hero wannabe”, he loved life too. He played in a band named “Tout-à-Coup Jazz”. He was their guitarist. Not even on his assumption as president of Burkina Faso, did he do away with his musical talent. He personally composed the nation’s national anthem.

This is perhaps the only president in African history who rode to work on 2 wheels.

For some empathetic reason, the refused to use the air conditioner in his presidential office. He wanted to feel what majority of the people were feeling and not to be isolated in a luxurious lifestyle.

Thomas reduced his monthly salary to $450. For his possessions, Wikipedia states, he had “a car, four bikes, three guitars, a fridge and a broken freezer”.

Sankara was greatly moved by the examples of the Cuban revolutionaries- Fidel Castro and Che Guevara. Back home he also admired Ghana’s revolutionary, Jerry Rawlings.

As a disciple of the Marxist theory, he hated injustice and had no patience with “lazy workers”. He set up tribunals to try corrupt officials from the past administration.

In the “sanitation” process, the “Che Guevara” of Africa as fondly called was accused of extrajudicial executions and violations of human rights.

The name “Burkina Faso” is courtesy of Thomas Sankara. Initially the country which was a French colony was known as “Upper Volta”. He changed it to Burkina Faso- meaning the “Land of Upright Men”.

i. He Sanitized His Government- Just like Tanzania’s Magufuli, Thomas Sankara cut off all lavish expenditures of government officials. He made government works less attractive by mandating well-off civil servants to pay one month’s salary to public projects.

ii. Transformed The Economy- His economic policies were geared towards the fight against corruption, Agriculture/reforestation, hunger alleviation, educational and health reforms.

The economic upgrade within the few years of leadership brought the West African country into food self-sufficiency. There was also a boost in the country’s cotton production which aim was to develop the clothing and textile industries.

iii. Encouraged Gender equality in Work Places- Sankara appointed women to high governmental positions while encouraging more women into the workforce. His regime had the highest number of women in government, making it a record in West Africa.

7. Murdered By His Close Friend

While Sankara was commander of the Commando Training Centre in Pô, in 1976, he met Blaise Compaoré. Together with other “like minds”, they formed a secret organisation called the “Communist Officers’ Group”.

Thomas Sankara was assassinated on 15 October 1987 during a coup execution by Blaise Compaoré in Ouagadougou. After 30 years, his death is still under investigation.

The French government is also a suspect in the case. So far they have declined co-operation to get to the root of the assassination.

After much restraints from the former sit-tight government of Blaise Compaoré, there are increasing calls for the death of the much-loved pan-Africanist to be judicially revisited and the culprits brought to book. On that note, Blaise is currently on exile in Cote d’Ivoire.

According to Mariam Sankara’s lawyers in 2015, autopsy revealed that Sankara’s body was “riddled” with “more than a dozen” bullets.