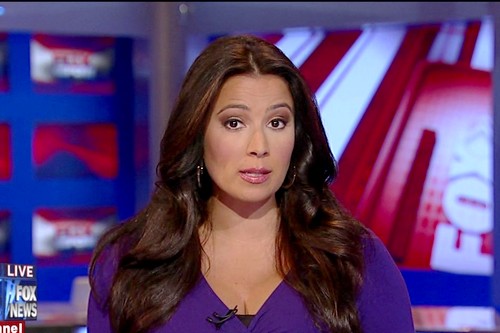 I adore beautiful women and the halls of Fox are loaded with some of the most gorgeous ladies in the world. From the girl next door, to the elegant, to fashion model serious… there’s a female at Fox for every taste. But these ladies aren’t just looks, they’re extremely talented and have helped propel Fox News to the top of the cable news ratings. Have a look at the  10 of the hottest female anchors and reporters from Fox News and Fox Business. Jamie Colby currently serves as co-anchor of FOX News Channel’s (FNC) “America’s News Headquarters” (Saturdays 1-2PM/ET and Sundays 10-11AM and 12-1PM/ET). She joined the network in 2003 and is based in the New York bureau.

Prior to joining FNC, Colby was a correspondent for CNN. She also served as an anchor and reporter for CBS News, WPIX-TV (CW 11) and WNYW-TV (FOX 5) in New York, NY. Sandra Smith joined FOX Business Network (FBN) as a reporter in October 2007. A graduate of Louisiana State University, Smith began her career as a research associate at Aegis Capital. There, she assisted in the research and analysis of retail stocks, prepared weekly stock newsletters to clients and identified investment opportunities.

Prior to joining FBN, Smith was an on-air reporter for Bloomberg Television. Twitter: @gogodiamond
Rebecca Diamond currently appears as a contributor on other Fox News Channel and Fox Business Network. She hosted the Fox Business Network TV show Happy Hour which was broadcast live from the Bull & Bear bar in the Waldorf Astoria Hotel in New York City.

Diamond graduated from the University of Maryland, College Park, where she majored in Broadcast Journalism. She worked as an anchor/reporter for Lifetime Television and as a business writer for The Associated Press. Twitter: @MollyLineFNC
Molly Line joined Fox News Channel as a Boston-based correspondent in January 2006. Prior to joining FNC she worked as an anchor/reporter for WFXT (Channel 25), a Boston affiliate (Dec 2002-Dec 2005). While at WFXT, Line covered the sentencing of shoe bomber Richard Reid and the Station Nightclub Fire — a disaster that killed 100 people.

Line is a graduate of Virginia Tech where she received her Bachelor of Arts in Mass Communication and Political Science. Twitter: @megynkelly
Megyn Kelly currently serves as anchor of FOX News Channel’s (FNC) The Kelly File (weekdays 9-10PM/ET) and is based in New York. She joined the network in 2004 as a Washington-based correspondent. She previously hosted America Live. Prior to that, Kelly co-hosted America’s Newsroom along with Bill Hemmer. Since 2007, the two have hosted Fox News Channel’s New Year’s Eve special every year.

READ ALSO:  Top 10 Most Advanced Attack Helicopters in The World

Kelly earned her B.A. in Political Science from Syracuse University and a J.D. from Albany Law School, where she graduated with honors and served as editor of the Albany Law Review. In 2004, Banderas was awarded the “Outstanding Single Newscast” Emmy award for her coverage of the Republican National Convention. he graduated with a bachelor’s degree from Emerson College. Twitter: @AndreaTantaros
Andrea Tantaros is a co-host of the hit show “The Five,” weekdays at 5 p.m. ET on Fox News Channel and is the host of the nationally syndicated radio show, “The Andrea Tantaros Show.” Tantaros also appears regularly on the Fox Business Channel and writes a weekly column for the New York Daily News and Newsmax.

The Washington Times has called her “the most pragmatic personality on ‘The Five’… who has already had a lifetime of experience despite only being in her 30s. Twitter: @ainsleyearhardt
Ainsley Earhardt currently serves as a co-host of Fox News Channel’s (FNC) “FOX & Friends First” (Weekdays 5-6 a.m. ET). She joined the network in 2007 and is based in New York.

Prior to joining FNC, Earhardt served as an anchor for KENS-TV (CBS 5) in San Antonio, Texas and WLTX-TV (CBS 19) in Columbia, SC, where she was named “Best Personality of the Year” in Columbia Metropolitan Magazine.

Earhardt graduated from the University of South Carolina with a B.A. in journalism.

READ ALSO:  Will you donate sperm? Twitter: @Jennafnc
Jenna Lee currently serves as a New York-based anchor on Fox News Channel’s (FNC) Happening Now, alongside Jon Scott (weekdays 11AM-1PM/ET). Lee joined the network in 2007 as a reporter for the Fox Business Network (FBN) and transitioned to FNC in 2010.

Lee is a graduate of the University of California, Santa Barbara, with a Bachelor of Arts in English and Global & International Studies with emphasis on politics and socioeconomics. She also holds a Master of Science degree in Journalism from Columbia University.