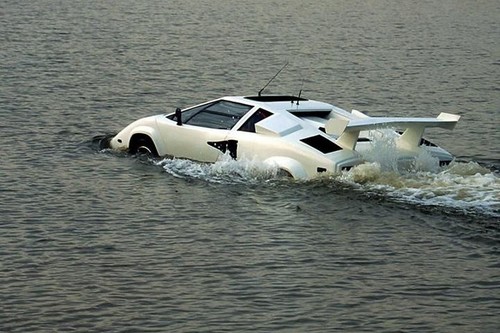 <![CDATA[ <p>Cars that can do more than run on road is undoubtedly a very good idea. Credit goes to WW II for making cars that can swim. And though the largest numbers of incredible amphibious cars were made way back in the 1960s, the prospect of a car that can navigate waterways like a boat continues to attract inventors. Here, below is a list of Top 10 Incredible Amphibious Cars. Have a look! This is the Gibbs Quadski, an amphibian that operates as both an ATV and a personal watercraft. Launched in October 2012 by Gibbs Sports Amphibians, the Quadski is a 4-stroke, amphiquad that converts to a personal watercraft. It features a top speed of 72 km/h (45 mph) on both land and water, a proprietary marine jet propulsion system, and wheel retraction. The Quadski can transition between land and water in about five seconds. The Quadski uses Gibbs’ High Speed Amphibian (HSA) technology, which includes more than 300 patents and patents pending worldwide. The Amphicar is a German amphibious automobile which first produced for sale to the public in 1961. The vehicle was designed by Hanns Trippel and manufactured by the Quandt Group at Lübeck and at Berlin-Borsigwalde. The Amphicar was designed to be marketed and sold in the USA. Compared to most boats or cars, its performance was modest, and only 4000 were produced by 1965. Nevertheless, it is still among the most successful amphibious civilian autos of all time, and still often prized and preserved as novelty collectible automobiles today. The Gibbs Aquada is a high speed amphibious car developed by Gibbs Sports Amphibians in New Zealand. It’s neither a modified land car nor a boat with wheels. Instead, it’s a specially designed vehicle that’s equally at home in the water as it is on dry terrain. It is capable of speeds over 160 km/h (100 mph) on land and 50 km/h (30 mph / 26 knots) on water. The Aquada made history in March 2004 when Richard Branson piloted one across the English Channel in one hour, 40 minutes and six seconds, a new record. Well-known Swiss sportscar tuning firm Rinspeed built an amphibious car in 2004. With complicated hydrofoil design, the vehicle can go with speed 31 mph (50 km/h) on water – which is still pretty fast. Under 30 knots, the Rinspeed can cruise in water like a conventional boat. And on land it’s even quicker, boasting a top speed of 124 mph (200 km/h). This amazing hydro car is powered by natural gas, and it’s the first amphibious vehicle to be fueled by this environmentally-friendly resource. It has a 750cc, two-cylinder, turbo-charged engine, and its integrated hydrofoil design can be deployed at water depths over four feet. World’s First Amphibious Lamborghini: This is a mid-engined (for ballast) Lamborghini Countach that was modded by SeaRoader aquatecht Mike Ryan to be amphibious. “If it’s got wheels, I’ll make it float!” boasts Ryan, who has also converted jeeps, motorcycles, a London taxi cab and even an ice-cream van into water-going vehicles. As you might imagine, converting a luxury sports car into an amphibious vehicle isn’t a cheap undertaking; According to Ryan, the glass alone cost $3,007. In the water, a hydrofoil at the front of the car lifts the nose of the Countach, while hydraulic activators compress its Formula 1-style suspension system. The 5-seater ‘Humdinga’ concept vehicle is a full-time 4WD powered by a 350 BHP V8 engine, capable of 160 kmh on land and on water at 65 kmh. Designed by Gibbs Technologies, it was publicly announced in February 2012 and was created specifically to access remote and hostile terrain. It uses the same High Speed Amphibian (HSA) technology as the Gibbs Aquada. This aluminum-bodied, meticulously crafted amphibian is unique in that it literally – transforms its shape from ‘LAND MODE’ to ‘WATER MODE’ with the flip of a switch. On land, its full-length articulating sponsons are raised and become the car’s fenders. Upon entering the water, the sponsons are lowered nearly eight inches to transform the car into a tunnel-hulled watercraft within a matter of seconds. It’s main body is made of type 304 stainless steel, so rust will not be a problem. Under the hood, it has a fully dyno-tuned Chevrolet engine that produces 762 horsepower at 5,800 rpm. Originally, the car used a six-bladed propeller. However, according to Dobbertin, this didn’t create enough “bite in the water,” so he replaced it with a four-bladed Rolla stainless steel propeller that was yet to be tested in the water before the HydroCar was sold. Despite required tweaking, it’s still an incredible amphibious vehicle. You want a car that goes fast, a car that looks unique, a car that can transition into a speed boat in seconds. Well, there’s a car for you – the Sea Lion prototype: the world’s fastest amphibious “land speed” vehicle. Actually, it’s not technically a car. Witt himself, the designer of car, calls it an Amphibious World Speed Record Competition Vehicle. It was designed to set world records on land and on water. On the road, the Sea Lion clocks in at 125 mph (201 km/h). Not terribly impressive, but it’s off the road where the Sea Lion shines. In the water, meanwhile, it can reach respectable speeds of as much as 60 mph (96 km/h). The body of the Sea Lion was made by using TIG-welded 5052 aluminum and CNC-milled. Is it a Jeep? Is it a speedboat? No, it’s WaterCar’s Panther amphibious vehicle. A Californian-based car company has designed the world’s fastest amphibious car called the Panther, pictured above. For 13 years, Dave March, the founder of Panther has dreamed about building a car that would perform equally well on water as they did on land. In fact, he wanted his cars to reach “freeway”-type speeds in the water. The result was the WaterCar Python, which became the fastest amphibious car in the world, reaching road speeds of over 125 mph (201 km/h) and water speeds of at least 60 mph (96 km/h).

WaterCar’s latest offering is the Panther. WaterCar calls the Panther the “ultimate vehicle” It is capable of reaching water speeds of up to 45mph – almost as fast as an average speedboat – plus can be driven up to 80mph on land. The Panther’s design is based on a Jeep CJ8 Scrambler, however, because the chassis of the Jeep was too heavy for the water, the Panther’s lightweight chassis is made of chromoly steel. Whereas the Python is an amphibious sports car, the Panther is more of an amphibious SUV, as WaterCar claims that it can be driven on all sorts of surfaces, including sand and mud.