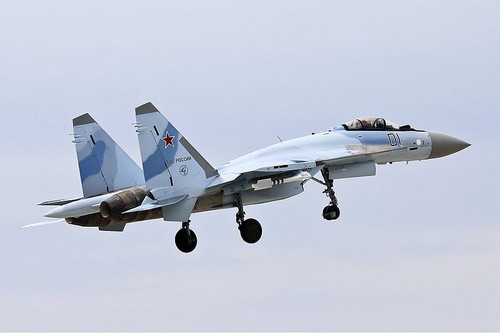 <![CDATA[ <p>Jet fighters have important role in military aviation. Military aviation is no doubt the foremost strategic weapon these days, each in terms of combat effectiveness and of crucial technologies enforced. In trendy warfare, air dominance is a must from day one, in order that air-to-surface and air-to-sea operations are often conducted safely and with efficiency. And fighting jets continually play a significant role in air dominance. With the advancement in technology several countries modernized their fighting jet to full fill the requirement of day. Here is a list of 10 incredibly advanced jet fighters; some of them are part of military aviation and other are going to be part in close to future. A fourth-generation, lightweight, single-engine multirole fighter aircraft developed by the Swedish Saab the Gripen (griffin). The JAS 39 Gripen uses the latest technologies that can perform various missions, such as air defense, interception, and ground attack and reconnaissance. Beacause of its advanced aerodynamic layout, this fighter is very agile for close combat. It can take of and land on short-strip airfields. Originally developed by General Dynamics for the United States Air Force, F-16 Fighting Falcon is at No. 9 in our list. Designed as an air superiority day fighter, this single-engine fighter evolved into a successful all-weather multirole aircraft. Since production was approved in 1976, more then 4,500 aircraft have been built and serve in the air forces of 25 other nations. At No. 8, the Russian fighter MiG-31 (NATO designation Foxhound-A) – stands as the ultimate evolution of the MiG-25 “Foxbat”. The MiG-31 is a supersonic interceptor aircraft. It has the distinction of being one of the fastest combat jets in the world. The latest version of this fighter jet is the MiG-31BM – a true multi-role Foxhound, able to undertake long-range interception, precision strike and defense suppression tasks. One of the most successful modern and advanced jet fighters, with over 100 aerial combat victories. Designed by McDonnell Douglas, F-15 Eagle is a twin-engine, all-weather tactical fighter jet. The Eagle first flew in July 1972, and since that, it has been exported to many nations, notably Japan, Israel, and Saudi Arabia. It is still in service and is expected to remain operational at least until 2025. At 6th place among the most advanced jet fighters is the Russian made heavy class, long-range, multi-role one-seat fighter Su-35. The jet is designed by Sukhoi from the original air superiority fighter Su-27. It was originally designated Su-27M and later named Su-35. The aircraft is considered a close cousin of the Sukhoi Su-30MKI (a modernized Su-30 variant for India), because of the similar features and components it contains. The french Dassault Rafale comes at No. 5 among the world’s most advanced jet fighters. Designed and built by Dassault Aviation, Rafale is a twin-engine, canard delta-wing, multirole fighter aircraft. Almost entirely built by one country, Rafale is distinct from other European fighters of its era with a high level of legerity, capable of at the same time playing air domination, interdiction, intelligence activity, and mobile nuclear deterrent missions.

READ ALSO:  10 Food You Thought Were Healthy But Are Not Eurofighter Typhoon spot fourth among the 10 most advanced jet fighters in the world. Built on the strength of four European nations: United Kingdom, Germany, Spain and Italy, and their leading defense and aerospace companies. Eurofighter Typhoon is the world’s most advanced swing-role combat jet providing same time deploy-able Air-to-Air and Air-to-Surface capabilities. Based on the McDonnell Douglas F/A-18 Hornet, the F/A-18E/F Super Hornet is a combat-proven strike fighter with built-in versatility. The F/A-18E/F’s suite of integrated and networked systems provides enhanced interoperability, total force support for the combatant commander and for the troops on the ground. Both the F/A-18E (single seat) and F/A-18F (two-seat) models convert quickly from one mission type to the other with the flip of a switch to provide consistent air dominance. The F-22 is a multi-role air-superiority jet fighter with improved capability over current aircraft. This ultimate state of art weapon was primarily designed as an air superiority fighter, but the aircraft has some extra capabilities like Air-to-Surface, electronic warfare, and signals intelligence roles. F-22 Raptor is a stealth technology, single-seat, twin-engine fifth-generation supersonic super maneuverable fighter aircraft. >> 10 Insanely Strange Aircrafts That Actually Existed. The F-35 Lightning II is at No. 1 to the word’s most advanced jet fighters. The aircraft is designed with the modren battle space in mind. It is the most flexible, technologically sophisticated, fifth-generation multirole fighter ever built. With advanced stealth capability, F-35 delivers innovative capabilities to meet security needs for nations across the world.

Some Other Advanced Jet Fighters: The JF-17 Thunder multi-role fighter was jointly developed by China and Pakistan. Its called Joint Fighter-17 (JF-17), while in China its called “FC-1 Xiaolong” means “Fighter China-1 Fierce Dragon”. It has a conventional aerodynamic layout. It is fitted with Russian Klimov RD-93 turbofan engine with afterburner. It is a derivative of the RD-33, used on the Mikoyan MiG-29 Fulcrum. The JF-17 is intended for air defense and ground attack missions. It has beyond visual range attack capability. The Russian fighter MiG-35 – stands as the ultimate evolution of the MiG-29 Fulcrum fighter series. The MiG-35 has vastly improved avionics and weapon systems, especially the new AESA radar and the distinctive designed OLS, relieves the aircraft from relying on GCI (ground-controlled interception) systems and enables it to conduct independent multi-role missions. According to Russian military, the new MiG-35D multirole fighters as an equal to the U.S. F-35 jet fighters.