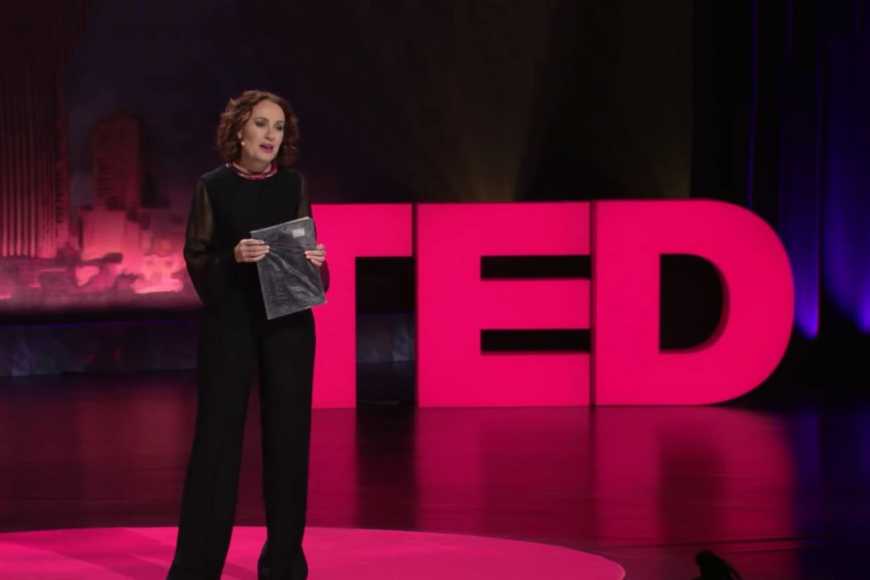 The Top TED Talks of 2018 So Far — and What You Can Learn From Them. Inspiration can take many forms, but oftentimes, we find it through other people. That spark can be lit by a colleague, a friend, an acquaintance or even a complete stranger, and that last one is what TED — a nonprofit with a mission to spread ideas — does best.

Though the organization started out working in technology, entertainment and design, its trademark short, powerful talks now cover any range of topics. Here are seven of the most compelling talks of 2018 so far, with key takeaways.

Jaron Lanier: How We Need to Remake the Internet

“Back in the 1980s, actually, I gave my first talk at TED,” says Jaron Lanier, a computer scientist, writer and pioneer of virtual reality. “At that time, we knew that we were facing a knife-edge future where the technology we needed, the technology we loved, could also be our undoing.”

Lanier says that during the dawn of the internet, there was an idealized vision — a pure, public forum where people could share their knowledge — but also a potential dark side. He argues we’ve now entered that dark side. Advertising models have evolved, and social networks have evolved with them — incorporating perceived social “rewards” and “punishments” for users. “I can’t call these things social networks anymore,” he says. “I call them behavioral modification empires.”

Lanier doesn’t blame Silicon Valley or the people behind the tools, but he underlines the serious nature of the problem, encouraging a fee-based model for the majority of search and social networking — whether subscription or use-based.

“I don’t believe our species can survive unless we fix this,” he says. “We cannot have a society in which, if two people wish to communicate, the only way that can happen is if it’s financed by a third person who wishes to manipulate them.”

Dan Gartenberg: The Brain Benefits of Deep Sleep — and How to Get More of It

For 10 years, sleep scientist Dan Gartenberg has studied how we can get more efficient shuteye — and he and his colleagues might finally have an answer.

READ ALSO:  A Single, Simple Rule That Will Change Your Life

Poor sleep is an epidemic today, as the average American sleeps an entire hour less than they did in the 1940s. Substandard sleep not only has ties to Alzheimer’s disease, stroke, diabetes and cardiovascular disease, but it can also lead to risky decisions and memory problems. And although circadian rhythms dictate our energy levels throughout the day, general knowledge is still lacking when it comes to how to make the most of them.

That’s where Gartenberg and his colleagues come in. They’ve been studying deep sleep — the tier beyond light sleep and REM sleep — and found that using certain sounds to stimulate subjects’ deep sleep can elevate the number of long-burst brain waves they experience. These brain waves, called delta waves, are integral to deep sleep’s ability to convert our daily interactions into long-term memory and personality growth. Gartenberg and his team hope to make their idea mainstream.

Marily Oppezzo: Want to Be More Creative? Go for a Walk.

Your next big idea could be around the corner — as long as you walk the half a block to get there.

In her research, behavioral and learning scientist Marily Oppezzo tested groups of people as they brainstormed creative uses for everyday objects. She found that those who performed the exercise while seated averaged about 20 creative ideas in four minutes, but those who brainstormed while walking on a treadmill came up with close to double. When the treadmill group tried the exercise while seated, they still beat the average — meaning the potential creativity benefits tended to last even after they stopped walking.

Oppezzo suggests taking a walk before your next big meeting or whenever you’re stuck, but she says it’s important to intentionally choose a problem or topic to brainstorm about as you move. To avoid forgetting any ideas you float, she suggests using a voice recording app.

Jason Shen: Looking for a Job? Highlight Your Ability, Not Your Experience.

College majors might be on the way out — at least when it comes to hiring, according to TED resident Jason Shen.

Shen studied biology in college but, after being rejected by Google and other companies, went on to land a job as product manager at Etsy. What convinced the company to hire him? He showcased his ability rather than his experience: he read the company’s IPO filings in their entirety, built a website analyzing the company’s business model and suggested four ideas for new features.

“At this rate, we should all be expecting to do jobs we’ve never done before for the rest of our careers,” says Shen, who adds that hiring managers should expand their searches beyond traditional candidates and look in unlikely places. If you’re pursuing a new opportunity, Shen recommends seeking out ways to showcase your unique skills outside the traditional resume and cover letter — even if that’s not part of the application or interview.

READ ALSO:  KISS Frontman Gene Simmons Says Success Comes to Those Who Get Their Lazy Asses Out of Bed and Work

Related: 5 Keys to Inspiring Leadership, No Matter Your Style

Tapiwa Chiwewe: You Don’t Have to Be an Expert to Solve Big Problems

An immense cloud of air pollution hanging over a city he loved, Johannesburg, inspired computer engineer Tapiwa Chiwewe to research air quality — something he had no experience in whatsoever. He soon learned that air pollution is the world’s single largest environmental health risk — and that in 2012, nearly 14 percent of deaths worldwide were attributed to household or ambient air pollution. The Top TED Talks of 2018 So Far – and What You Can Learn From Them

Chiwewe became a student again to fast-track his environmental studies, then aimed to figure out a way to use his unique experience in software engineering and artificial intelligence to help build a solution. That came in the form of an online air quality management platform, which employs both historical and real-time data to make future projections for different pollutant levels and show air quality trends.

“Even if you’re not an expert in a particular domain, your outside expertise may hold the key to solving big problems within that domain,” Chiwewe says. “Sometimes the unique perspective you have can result in unconventional thinking that can move the needle, but you need to be bold enough to try.”

He encourages people to consider the consequences of not acting and allow resistance to motivate them further. Pay attention to natural curiosity, and if you feel passionately about a problem outside your field, try tackling it anyway.

Tanya Menon: The Secret to Great Opportunities? The Person You Haven’t Met Yet.

Think for a moment about your best friends. Are they the same nationality as you? The same gender? The same ethnicity? Do they resemble you? Organizational psychologist Tanya Menon kicked off her TED Talk with questions such as these and entreated audience members to widen their social universes.

Menon referenced research by sociologist Mark Granovetter, who found that most people don’t secure job opportunities through strong ties — think mother, father, significant other. Instead, they find them through weak ties — acquaintances or people you met recently.

Weak ties — or new connections — are “your ticket to a whole new social world,” says Menon, who encourages people to break their social habits by making life a little more inefficient and straying from their daily routines. She suggests visiting new social hubs including coffee shops — or even a mail room on a different floor of your office building.

Menon also suggests networking from a place of strength by affirming yourself with positive statements regularly — and to stray from thinking about interactions in a transactional way. (For example, instead of saying, “You’re welcome,” try “It’s great to collaborate” or “That’s what friends are for”).

Related: The Most Successful People Learn How to Focus on the Positive

Susan David: The Gift and Power of Emotional Courage

Psychologist Susan David says the way in which we deal with our emotions drives “every aspect of how we love, how we live, how we parent and how we lead.” The black-and-white view of emotions perpetuated in today’s society — positive or negative — is rigid, she says, and “rigidity in the face of complexity is toxic.” The Top TED Talks of 2018 So Far – and What You Can Learn From Them

It also tends to be ineffective and unsustainable, as David’s research on emotional suppression shows that when emotions are pushed aside or ignored, they get stronger. The Top TED Talks of 2018 So Far – and What You Can Learn From Them

A survey conducted by David showed a third of people either judge themselves for having “bad” emotions or actively try to push aside those feelings. According to the World Health Organization (WHO), depression is now the single leading cause of disability worldwide, ahead of both cancer and heart disease.The Top TED Talks of 2018 So Far – and What You Can Learn From Them

Since the only certainty in life is uncertainty, David says working on emotional agility is key to building up resilience. She called on audience members to label emotions accurately in order to determine the cause of their feelings, saying it’s the first step to coming up with concrete steps to address those emotions.

Another key point? “Emotions are data — they are not directives,” David says. It’s important to acknowledge emotions and mine them for their meanings, but that doesn’t mean letting them control you. When you feel a strong emotion, ask yourself what it’s telling you — and use that to move forward. The Top TED Talks of 2018 So Far – and What You Can Learn From Them