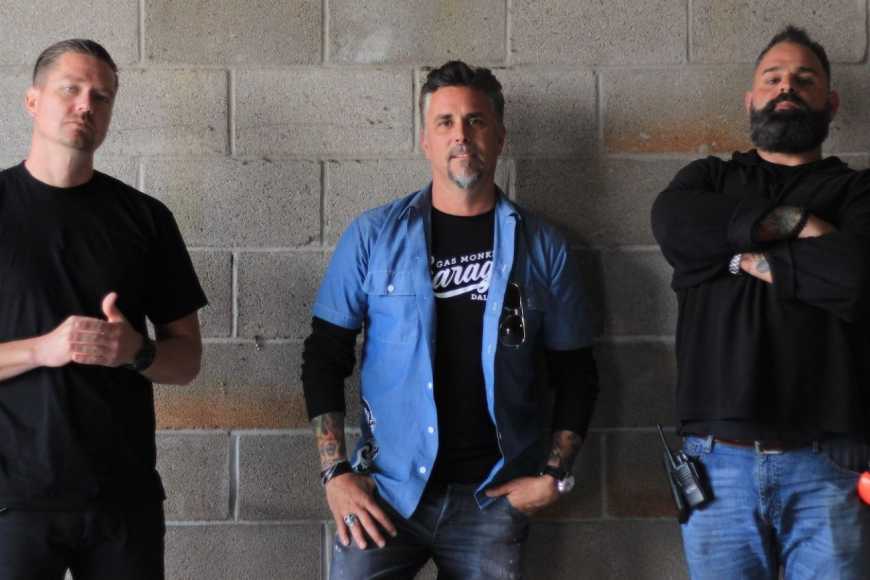 He Went From Dead Broke to Millionaire Because He Just Wouldn’t Stop Trying – What’s tattooed, goateed and can be seen in more than 200 countries? Richard Rawlings, owner of Gas Monkey Garage and star of Discovery’s Fast N’ Loud.

Now in its fifth season, Fast N’ Loud follows Rawlings as he scours the country for beat-up classic cars, negotiates the hell of their sale price, then brings them back to his Gas Monkey Garage in Dallas to restore, and more importantly, flip them for a profit.

The success of Fast N’ Loud and other shows on Discovery spawned Rawlings’s latest offering, Garage Rehab, which has him and his team lending their brains and backs to struggling car shops. Read on for an exclusive interview Entrepreneur conducted with Rawlings on the eve of the show’s debut. (New episodes air Wednesdays at 10 p.m. on Discovery).

Congrats on the new show, Richard.

Well, thank you, sir. I’ll tell you that no success comes without hardship and failure. This is a wild business idea I had back in 2004. I’m humbled and lucky and blessed to be where I’m at now, but it was a long road. I went dead broke — twice! — trying to get Gas Monkey up and going. And when I say broke, I mean sleeping on my sister’s couch and can’t pay-the-rent type broke.

What kept you going?

I just saw the need in the marketplace and didn’t want to end on a failure. I just kept going. It’s been a crazy ride. Now we have this huge brand in 200 countries translated into 13 languages. We have books, tequila and vodka, restaurants, an energy drink, apparel in Kohl’s, Walmart and Target. It’s just it’s been a wild time.

Was that all part of your initial plan?

You know what? It really was! I looked at other shows on TV at the time and it was mostly all motorcycle guys. And my wife and kids and wouldn’t watch with me. There was a lot of bravado with these guys, cussing and kicking boxes, and I was very defeated at the end of the shows because it was like, “I can’t afford a $200,000 motorcycle.” So when I decided to do this, it was it was to bring in the families and the kids and the grandmas and make a fun show about what we do. Look, I’m still a goateed guy with a bunch of tattoos, but I’ve got a poodle and not a pit bull. I don’t kick boxes and I don’t scream at other people.

People on some of these reality shows, like American Chopper, have had very public meltdowns. Have you learned from shows that came before you?

I have and I’ve gotten close to that myself. You know, your body will tell you when you push it too hard. And so I understand because when it’s going and it’s going this fast, it is really, really difficult to keep yourself on track.

READ ALSO:  12 richest footballers in the world and their net worth

How do you stay focused as your business grows into all of these different facets?

My style is very hands-on. I own everything we do or the vast majority of everything we do. I don’t do a lot of letting people just use my name like a lot of people in my position would do. So if we’re launching another restaurant or we’re going to do another tequila, I want to own it so that I’ve got skin in the game and I have a reason to pay attention to it.

How would you describe your leadership style?

I get the team set up good and then I’ll let them do their thing. At the end of the day, if you put the time and effort into interviewing and finding the right people for a job, you’ve got to let them do that job. You can’t sit there and micromanage. Yes, they may mess up and you may have to move onto another person, but you can’t live with that fear all day long.

You like to show up at car negotiations with a bag of cash. Do you recommend others doing that?

A man who taught me the car business and recently passed told me, “Son, you can always buy a $10,000 car for five grand if you’ve got it in your pocket.” So carrying cash to deals started back when I was in high school. I’d have a thousand bucks on me almost all the time, which is unheard of. But I could always make a deal for whatever the game was or whatever the tires were. So I learned that from him early on and it’s always stuck with me.

What is the most fulfilling part of your job?

I get a great satisfaction helping these shops we’re visiting, helping them through the same mistakes I made — or better yet, helping them avoid the mistakes altogether. But I’ll say that the proudest moments I have is when I walk into the shop and I’m the first one there and I’m drinking my coffee and I’m watching these young guys and girls pour into the office. I know that I’ve got to do my job better and harder than anyone in that building so that everyone there can take care of their families. And that’s one of the coolest feelings for me. I employ well over a thousand people and I take great pride in that.