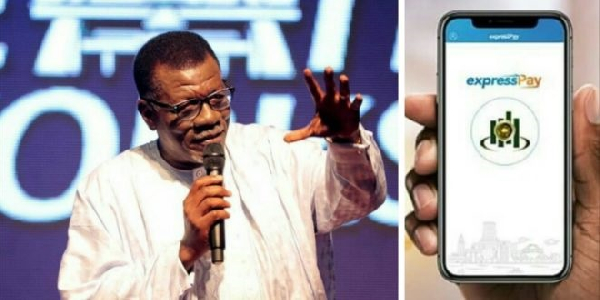 Pastor Otabil introduces a new method of paying offering and tithe. ICGC goes digital. Contemporary pastors are no longer solely interested in getting people to Heaven; they’ve devised intelligent ways to make good money while reaching out to souls.

For the so-called men of God swim in millions, while their congregations are incredibly poor.

Ahh well, International Central Gospel Church (ICGC) which is headed by the founder Dr Mensa Otabil, has introduced a new method of paying offering which has got social media talking.

The new method introduced by the church was advertised on the official twitter handle of the media giant, Joy News on Sunday, July, 29 2018.

According to the ad post by Joy News, members of ICGC who could not make it to church on Sundays could still pay their offering through an online bill payment platform, ExpressPay app to the church’s bank account. This presupposes that their (church members) presence isn’t that necessary comparably to their offertory.

Since the post went viral, many have criticized the leadership of the church, headed by Pastor Mensa Otabil of running the church like a business organisation whose motive is to make money rather than win souls for Jesus Christ.

There are some who are also of the view that there is nothing wrong with the new payment method introduced by ICGC as we live in a digital age and such practices are bound to become the norm sooner or later.

As a reminder, this is not the first time ICGC has been in the news for offering and money-related scandals as exactly a year ago in July 2017, they were condemned by the public for making a price list for special prayer requests.

The church takes full advantage of technological advancement as it also accepts donations through MTN Mobile Money. So, henceforth, one doesn’t need to make an appearance at ICGC on Sundays before giving an offering as MTN Mobile Money has made it easier and convenient.