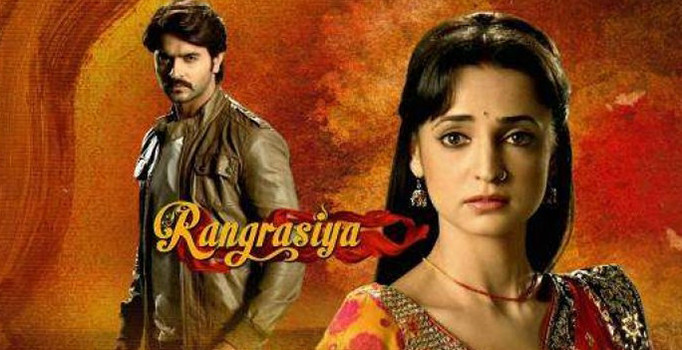 Parvati, affectionately known as Paro, has pure hatred towards Border Security Defence (BSD) officers, holding them responsible for the murder of her parents. She was brought up by her maternal aunt, and Thakurain Mala (Sadiya Siddiqui), and has consistent nightmares regarding the sight of her parent’s corpses. Her marriage is arranged with Varun (Vishal Gandhi), a boy from the neighboring village, by the corrupt Thakur Tejawat (Tarun Khanna). While Varun gives Paro the impression that he is loyal and honest, his real intention is to smuggle weapons across the border through their wedding.

The marriage is successful but the procession is disrupted by BSD officers, who are led by Major Rudra Pratap Ranawat (Ashish Sharma), and Varun is killed in the process. Oblivious of the reason behind the interference, Parvati accredits Rudra for her husband’s death and despises him. Rudra suspects that she is a material witness and imprisons her in hopes that she will confess. Tejawat learns that Parvati has survived the incident and in an attempt to prevent any possibility of her testifying, hires goons to murder her. Rudra senses danger to her life and relocates her to his paternal home, sacrificing his usual preference of avoiding his own family, and discloses her presence to his father only.

Kumkum Bhagya / Twist of Fate Get The Full Story &#038; Updates

His malicious aunt Mohini manages to discover Parvati and insults her virtue, causing Rudra’s father to falsely proclaim that she is Rudra’s fiancee, much to the chagrin of the pair, and the wedding preparations soon begin. Eventually, Parvati emotionally sympathizes with Rudra after learning that his mother eloped with another man, unaware that his mother is the Thakurain. On the day of her supposedly hoax wedding to Rudra, Parvati chooses to trust Tejawat instead and flees with him only to discover the truth behind her marriage to Varun. Upon realizing her mistake, she also becomes aware of her love for Rudra.

Parvati tries her best to win over Rudra, who thinks that she’s the one who set the fire when his dad was in the room. Rudra is accused of being violent towards Paro and this causes Rudra to lose his job. This angers him and in a drunken state he marries Paro out of anger and promises to make her life living hell, but does get his job back. Although he initially rejects Paro for betraying him, Rudra recognizes that he loves Parvati and through a series of events they are contentedly united.

Then, Thakurain Mala and Rudra meet again but Rudra has pure hatred towards her as she had left him. However, Paro tries hard to unite the mother and son and is eventually successful. The family is very happy but then Rudra gets a threat call from someone who says that he will kill Parvati. For safety, the family move house. Varun’s younger brother, Shanthanu Kumar (Vishal Karwal) enters their house as a bodyguard and he wants to seek revenge for the murder of his brother, who was Varun. Parvati finds out his truth soon after and when Shanthanu is about kill her, Rudra comes on time and saves her. Shanthanu gets arrested. Later on, Parvati becomes pregnant and gives birth to a boy that the couple name Dhruv. Their happiness is eroded when Shanthanu escapes from prison and murders Parvati, who dies in Rudra’s arms after he promises to be a good father to their 1 month old son, but not before killing Shantahanu.

After the show’s seven year leap, Rudra lives with seven-year-old Dhruv and his family. His new assignment is being the bodyguard of Myrah Mehra (also played by Sanaya Irani). Myrah, who is identical in appearance to Parvati, is an NRI and has arrived from the U.S to pick a venue for her wedding to Rohit Sehgal (Gurpreet Singh). Rudra tries to keep his distance from her, in the process becoming hostile and sparking hatred between them. While she is in Rudra’s house, Myrah unknowingly falls in love with Rudra and eventually he offers to become friends with her.

When he rescues her from thieves, it angers her that he says she is his responsibility. Myrah is kidnapped and Rudra saves her, remembering how he failed to save Parvati. Under the influence of pain medicine, Myrah kisses Rudra, who reciprocates, thinking she is Paro, but is reminded that she is to get married within a few days and she is not his Parvati.

While Myrah starts to accept her feelings for him, he expresses his frustration over her resemblance to his late wife. Heartbroken, she decides to leave Rudra’s life but her fiance arrives, inspiring jealousy in Rudra. After Myrah helps Maitalee and Samrat (who cannot conceive a child) adopt a baby, Rudra starts liking Myrah. Rudra refuses to confess that he loves Myrah, but Paro comes in a dream of his and tells him to move on and be happy as he does love Myrah. Colours of Love / Rangrasiya Full Story

He says that he won’t love anyone apart from Paro but Paro tells him that she has sent Myrah for him and Dhruv. She tells him that if he accepts Myrah then her soul will truly be happy. She tells him to move on from her and accept Myrah. In a drunken state, Rudra confesses his love to Myrah. Colours of Love / Rangrasiya Full Story

She is confused about her feelings and indecisive about their relationship, however remains adamant on marrying Rohit. Rudra writes a letter in which he apologizes for being unable to attend her wedding because he cannot bear the loss. Myrah sends a video that explains her love for Rudra to Rohit, who asks Myrah to pursue it. The show ends with Rudra and Myrah confessing their love and the whole family celebrating.