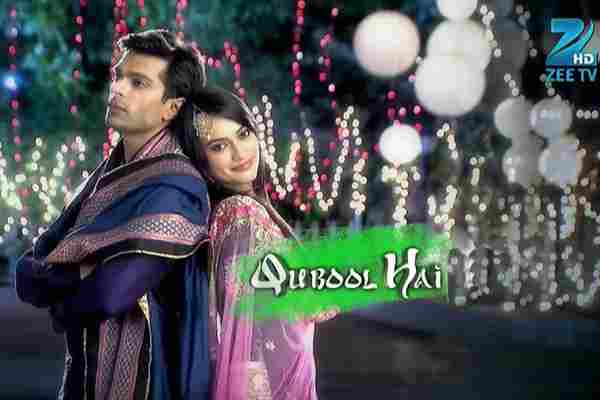 Qubool Hai / I Accept (India Series Full Story). Qubool Hai (English: I Accept) is an Indian soap opera that was produced by 4 Lions Films and broadcast on Zee TV. The series Qubool Hai / I Accept focused on the Muslim community and initially aimed to dispel stereotypes regarding Islam,[2]and had been credited for pioneering Muslim oriented programming in Indian television.[3] The first season of the show focused on the love story of Asad Ahmed Khan and Zoya Farooqui, played respectively by Karan Singh Grover who was later replaced by Raqesh Vashisth and Surbhi Jyoti, and ended with their murder.

In May 2014, the second season pf Qubool Hai / I Accept introduced Asad and Zoya’s twin daughters, Sanam and Seher (both played by Jyoti), and revolved around their lives 20 years after the death of their parents.[4][5] Karanvir Bohra portrayed Sanam’s husband Aahil Raza Ibrahim.[6] Shehzad Sheikh joined the cast as Rehaan Imraan Qureshi, Seher’s love interest.

The third season of the show portrayed Aahil and Sanam’s incomplete love story. After losing her memory, Sanam is transported to Pakistan, where she falls in love with Shaad Aftab Khan, who was portrayed by Varun Toorkey. Aahil’s second wife, the new Sanam, was essayed by actress Additi Gupta. The season was completed by Aahil, Shaad and Sanam’s death.

The fourth season of the show, launched in August 2015, was set 25 years after Sanam’s suicide and focused on the love story of Sanam’s reincarnation Mahira (again portrayed by Jyoti) and her husband Azaad Iqbal Khan (Rajbeer Singh), who is revealed to be a vampire and the Sanam’s son. When Azaad dies, Armaan Raza Sheikh (Avinash Sachdev), his long-lost brother, receives his heart in a transplant and falls in love with Mahira.[7] The show ended in January 2016 after Armaan and Mahira’s remarriage.

Zoya Farooqui, an orphaned NRI, travels to Bhopal in search of her biological father. During her endeavor, she resides with the family of wealthy businessman Asad Ahmed Khan. Initially, the two don’t like each other; Zoya is good-hearted yet modern and fun-loving, which irks Asad, who is traditional and ill-tempered. Despite their contrasting personalities, they develop feelings for each other.

Parallel to their love story, the household of Asad’s father Rashid Ahmed Khan is shown. After leaving Asad’s mother Dilshad, he married Shireen, with whom he had three children; Ayaan, Nuzhat and Nikhat. Asad, in spite of his hatred for Rashid, shares a strong bond with Ayaan.

After Ayaan’s temporary marriage to Zoya and numerous other difficulties among the two families, Asad and Zoya are finally married, Humaira finds her soul mate in Haider who is revealed to be Zoya’s brother and Zoya even comes to know that she is Mr.Siddiqui’s daughter and Mr.Siddiqui accepts Zoya has his daughter. Its revealed that Haider and Humaira shift to abroad and Humaira is pregnant and Asad and Zoya become parents of 2 identical twins Sanam and Seher.

Their happiness is short-lived as two years later, they are murdered by their old rival Tanveer Baig. Dilshad, however, manages to flee with one of her granddaughters while the other one gets lost and moves to Punjab.

Twenty years later, Sanam runs a restaurant in Punjab to support Dilshad and Haya. After an encounter with tycoon, Aahil Raza Ibrahim, he destroys her restaurant. Sanam moves to Bhopal and ends up working as a cook for Aahil.

Despite their initial hatred, the two develop feelings for each other. Tanveer, who is now blind, is also Aahil’s stepmother and Rehaan’s mother. She plots to Rob Aahil and transfer the wealth to Rehaan’s name. In her pursuit, she has Sanam marry Aahil, unaware that she is Asad and Zoya’s daughter.

Parallel to their love story, Haya is caught in a love triangle with brothers Rahat and Faiz; after accidentally marrying Faiz, she eventually unites with Rahat. Meanwhile, Seher, who has been raised as a con-woman, falls in love with Rehaan. In the process she plans to con Sanam, she learns that they are sisters. After regaining her eyesight, Tanveer has Aahil marry a new Sanam, who becomes his second wife.

She practices black magic and accidentally kills Rehaan, devastating Tanveer, who dies when she tries to attack Sanam and Seher. The new Sanam also kills Seher and attempts to sell Sanam into human trafficking, but to no avail as Sanam meets with an accident, losing her memory and crossing the border into Lahore, Pakistan.

Unable to recall her past, Sanam resides with Pakistani Major Shaad Aftab Khan, who names her Jannat and falls in love with her. As Jannat also reciprocates his love, she eventually remembers fragments of her life with Aahil, who searches for her desperately. Shaad’s former fiancé Misbah, who is revealed to be a terrorist named Noorjahan, is identical to her biological mother Tanveer; Jannat begins to recover her memory as she helps Shaad defeat Noorjahan.

After Shaad realizes that Jannat is actually Sanam, he sacrifices his love for her.The new Sanam murders Aahil with jealousy, devastating Sanam – she vows to avenge Aahil,Seher and Shaad’s death. Although she is unable to kill the new Sanam, she manages to deteriorate her eternal youth as a witch. Sanam commits suicide after vowing to haunt the new Sanam in the future.

25 years later, new Sanam is known as Khan Begum, after her marriage to a rich and recently deceased Nawab Sheikh. Sanam’s reincarnation Mahira arrives in Bhopal to stay with her step-sisters and falls in love with Khan Begum’s eldest son Azaad – who is revealed to be a vampire. After their marriage, Azaad dies, and his long lost brother Armaan receives his heart in a transplant. Armaan falls in love with Mahira, despite Khan Begum’s attempts to separate them. The season ended the show with Armaan and Mahira’s remarriage.