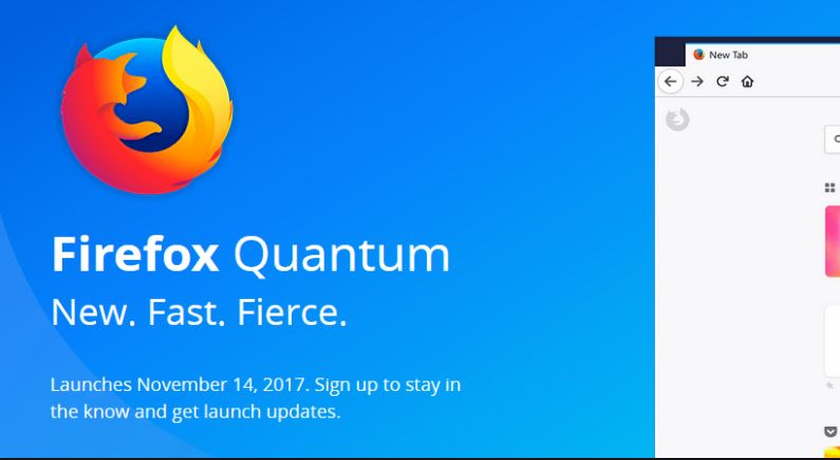 Without any doubt, Google Chrome has been the market leader in browser arena for quite some time now. Considered as the preferred browser by many users, Google’s Chrome has managed to capture a major share in the market in spite of its obvious battery drainage and memory leak problems.

According to the latest data released by StatCounter, Chrome clinches the top position with a mighty 54.89% of the worldwide browser market share, followed by Apple’s Safari with 14.88%, UC Browser with 7.43%, Mozilla’s Firefox with 5.9%, Microsoft Edge with 3.69%, and the remaining belonging to others.

However, Mozilla has decided to dethrone Google’s Chrome by giving it a competition with its next major release. The company will call the latest version of its web browsing software as “Firefox Quantum” instead of “Firefox 57”, which will be available to all Firefox users beginning November 14.

The Firefox Quantum browser will be twice as fast as Mozilla Firefox based on the benchmarks like Speedometer 2.0, which measures browser’s performance across popular web pages. It will also consume 30% less RAM than Chrome, claims Mozilla.

“Our engineering team has been relentless in their focus on making Firefox incredibly fast,” Mozilla’s Nick Nguyen explains. “Firefox Quantum is such a big leap forward that you’ll feel it instantly, just browsing your favorite websites.”

Some examples of that improved utilization include a new “super fast” CSS engine written in Mozilla’s Rust programming language that gives priority to the currently-displayed tab and the fixing of 468 bugs by the Firefox team over the past several months. In addition, the browser features a completely overhauled Photon design through the company’s Photon project, which makes it looks measurably different.

“With the new design, Firefox leaps ahead with a new interface that reflects today’s reality of High DPI displays and users who are more task focused than they’ve ever been,” Nguyen writes. “Users will be impressed by the modern new design that puts their needs first. Photon doesn’t just look good, it’s also smarter. If you’re using Photon on a Windows PC with a touch display, the menus change size based on whether you click with a mouse or touch with a finger.”

READ ALSO:  DStv introduces a new way to discover content with the HD Decoder – A first in Africa

Mozilla encourages anyone to test the browser for themselves in order to make his or her own comparisons. However, the company has shot a short video that captures their observations when comparing Firefox Quantum and Chrome on various websites in terms of speed. It can be clearly seen (see video below) that Firefox Quantum is often perceivably faster.