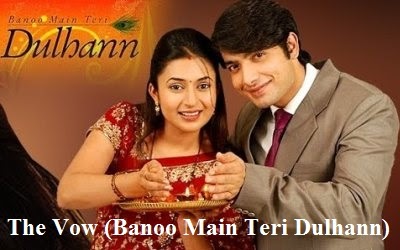 The Vow (Banoo Main Teri Dulhann) Get The Full Story, Synopsis. The interesting thing about this drama is the main actor Divyanka Tripathi, who we know through her role as dr. Ishita Raman Bhalla in serial Yeh Hai Mohabbatein. Her role as Ishita was raised in popularity. Indeed, the popularity of Divyanka Tripathi had established when starred in The Vow, Bollywood drama series with 700 episodes.

Ok, we begin with a synopsis The Vow (Banoo Main Teri Dulhann). The main character is a pretty girl who has a neat personality. Unfortunately, she was illiterate. This girl’s name is vidya

The Vow (Banoo Main Teri Dulhann) Get The Full Story

Vidya born unlucky because since childhood, she lived with uncles, aunts and cousins ​​who always governed it like a waiter. She also never introduced to everything to do with education. Of course, to an adult, she can not read or write.

Fate of Vidya  changed because she wandered into a small town in India called Benares. This adopted she had not thought and wanted. A wealthy landowner, Rajendra Pratap Singh, looking for a wife for his son, Sagar. He liked the character of Vidya, which he considered very fitting to accompany their children.

Why Rajendra Pratap Singh to finding a wife for his son? Apparently, Sagar is a man who has mental retardation because of heavy accident he experienced when he was a young. He was lucky not killed at the time, although eventually he had to pay dearly for this.

Vidya did not dare say anything when she was married to Sagar. She also recently Sagar know the condition of the day of the wedding. Kindness thoroughly tested. This makes the father-in-law, gave her the right heir of his wealth before he dies.

Well, this is where the audience’s emotions tested. Viewers will witness how the stepbrother of Sagar, Sindoora, are desperately trying to get rid of Vidya.

Vidya who was relieved to no longer persecuted at home uncle and aunt, was experiencing things worse in their new family home. Sindoora not alone. She was always asking two of her brothers, Mahua and Chandra to continue torturing Vidya. Sindoora was the mastermind of a car accident that happened to Sagar, although Sindoora annoyed because of the accident was not killed him. The Vow (Banoo Main Teri Dulhann) Get The Full Story

Of course, the protagonist actrees  is a noble woman of her heart. She never replied to hate those who have made it miserable. Patience kept her in the house. Not only that, she is also very patient in guiding her husband, until she finally found a doctor who could recover Sagar. The Vow (Banoo Main Teri Dulhann) Get The Full Story

Sindoora not remain silent. Especially when she realized that successful treatment for Sagar, Sagar despite losing all memory, including the presence of Vidya. He never remembered the kindness Vidya far. This is the right time for Sindoora to poison the minds of Sagar where Sindoora always tell bad things about Vidya. Sindoora also still not surrendered to eliminate Sagar in various ways. Until finally, Aniket permanent disability due to lifesaving Sagar.

A ‘goddess helper’ present for Vidya. She is Gayatri, aunt of Sagar. She collaborated with Vidya to expose the evil Sindoora so Sagar aware that his brain was poisoned. In fact, Gayatri and Vidya forced to confess that she was pregnant so Sagar do not hate her.

Unfortunately, Vidya too honest so that she herself admitted that she is in fact not pregnant. Sindoora, annoyed, she now working hard to eliminate anyone who got in her way. She tried to throw Aniket into prison by any means, and hired a hitman to kill Gayatri. His attempt nearly succeeded, because Gayatri into a coma, though not died.

In the climax, Sindoora successfully brought Sagar and Vidya to the brink of Kailashpati Shankar Mandir, and shot them both to fall into the abyss. They both died

Wow … only this time the “end of story” Indian drama ended tragically for the protagonist. However, viewers will be taken to a period where Sagar and Vidya reincarnated as Amar and Divya, 29 years later.

Divya is a modern, wealthy girl from London. While Amar is a tour guide who came from Benaras. They are met again in this city. Divya often experience flashbacks of the events of the past. While Amar need some time to be able to remember what happened in the past. The man who helps them is Bharat and makes them managed to find Sindoora.

Here, Sindoora has not repented. She kept trying to separate Amar and Divya, by forcing Divya to marry Samrat, false child of Rajiv and Mahua. Rajiv swap Amar and Samrat when current newborn.

So how the next story? Can Amar And Vidya to avenge  Sagar and Divya ?. Do Sindoora will realize her mistake? Or was she experienced the bad end of the age? read to continue story The Vow (Teri Dulhann Banoo) just here.

Her profile would have been very familiar. The beautiful actress born in December 14, 1984 also received many awards while starring debut serial drama “The Vow”, as Best Newcomer Actress. Best actress award from the various awards also she can when she became an actress starring role in “Yeh Hai Mohabbatein”

His face had graced our glass screen when he played in the drama “Bharat Ka Veer Putra” as Maharana Pratap. Until now, he is still engaged in the drama serie, despite most awards as Best Newcomer Actor he gained while acting as Sagar. Currently, he is still the main actors in the drama “Tere Pyaar Ki Kasam” which was aired by Colors TV.

When acting as Sindoora in “The Vow”, an actress born August 13, 1979 it has become one of the most popular actresses in India. Understandably, she was plunged into the world of acting since 2002. Her role as Sindoora gave her an award as Best Actress antagonists. Well, we can wait, ‘how much antagonistic’ what next appearance, to the extent that she earned the title. The Vow (Banoo Main Teri Dulhann) Get The Full Story

In addition to the names mentioned above, this drama also starring some of the other supporting players such as Raghav Rajendra Gupta Pratap Singh, father Sagar, Sindoora, Mahua and Chandra; Jaya Bhattacharya as Gayatri; Rajesh Balwani as Aniket; Shyam Sharma as Bharat, and more.

The Vow (Banoo Main Teri Dulhann) Get The Full Story