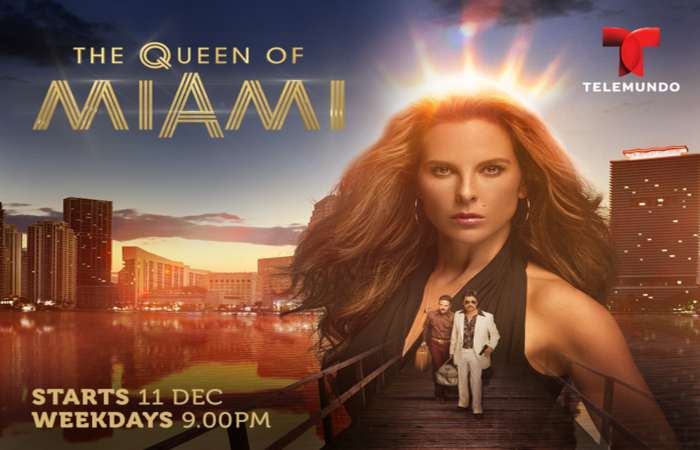 6 Reasons to Watch The Queen of Miami on Telemundo – In a world of crime, violence and dangerous alliances, a woman with a dark past rises as a Queen to control a giant empire. Here are 5 reasons why you should watch Telemundo’s brand-new drama series, The Queen of Miami, premiering on Monday, December 11th at 9 pm/WAT.

6 Reasons to Watch The Queen of Miami on Telemundo:

#1 Women Empowerment:
Empowering women and celebrating their independence are common themes throughout the Telemundo titles, and this telenovela is no exception. The main character, Anastasia Cardona (Kate Del Castillo), must fight for survival in a man’s world after she takes over her late husband’s drug empire. Raised by violence and taught through betrayal, she now has a ravenous appetite for power and proves she can run the business.

#2 Welcome to Miami:
As its title suggests, The Queen of Miami is set in the tropical paradise of Miami, with blue skies all year round, beautiful people and beaches aplenty. The arts scene, exotic food, and blazing nightlife make for the perfect coverup, while the streets of Miami are flooded with drugs, violence, and betrayal. The exciting city makes a great setting for an action-packed telenovela of this nature.

#3 Fashion Rewind:
Set in the 80s, The Queen of Miami opens the doors to not only a dark underworld of narcotics and violence but gorgeous fashion items too! Besides having a history of crime, corruption and economic downfall, Miami in the 80s was something spectacular. Think multi-colored one-piece swimming costumes, bell bottom pants, and floral tops.

#4 Drama, drama, drama!
Anastasia Cardona finds herself in the middle of a huge drug ring, but it’s her calling the shots. More than power, money or love, however, she wants revenge and will stop at nothing until she gets it. The Queen of Miami is definitely not short of drama and the unexpected love story makes it that much more intriguing!

#5 The Cast:
The amazing cast of The Queen of Miami includes the return of a few fan favorites, like Ximena Duque from If Only I Were You and Sofía Lama from All Roads Lead to Love. The show also features Oscar-nominated actress, Adriana Barraza, who plays a woman of the night, trying to escape the dark underworld. Not to mention fan-favorite, Kate Del Castilla from Queen of the South. The talented Cast performs their roles brilliantly and their chemistry is undeniable. Don’t forget to tune in to see for yourself!

The action-packed, drama-filled The Queen of Miami premieres on Monday, December 11th at 9 PM WAT on Telemundo (DStv Channel 118)