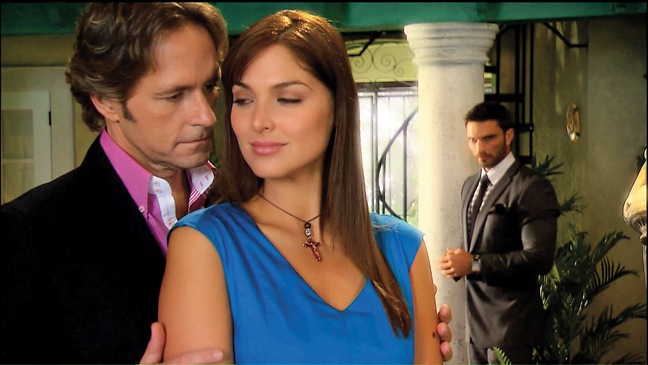 Eva Luna Telenovela (Full Story) –Eva Luna is a 2010 telenovela produced by Venevisión International in collaboration with Univision Studios, starring Eva González and Guy Ecker as the main protagonists, and Julian Gil and Susana Dosamantes as the main antagonists. It is a remake of Telemundo‘s 1997 telenovela Aguamarina. Univision aired Eva Luna weeknights at 8pm/7pm central from November 1, 2010 to April 11, 2011, and a TV-14 rating was applied for all episodes. Mexico’s Canal de las Estrellas aired Eva Luna from September 19, 2011 to January 6, 2012.

This is a story of Eva González, a young girl from the south of California who has to reside in Los Angeles for unknown reasons with her family. Several days to her trip to the big city, she receives a letter from her Aunt Augusta (Sonia Noemí) who writes to her niece that her future is dark and she will meet a man in her life who is a heaven and hell at the same time. It is Daniel Villanueva who is the widower in Los Angeles being a good catch and a womanizer. He succeeds in business and love affairs.

When a person knocks down her father to death and runs away leaving him bleeding and dying, Eva swears to revenge herself upon the person who leaves her without a father. Nevertheless, she has more essential issues to solve like how to survive in a big city and support her sister, Alicia. Alicia González, a sister to Eva, is the typical teenager who is attracted with the crazy life in Los Angeles offered by Tony Santana (Alejandro Chabán), a criminal with a great eloquence and charisma who steals the heart of a woman at first sight with all her financial assets, consequently.

In the big city Eva also yields to temptations and is trapped in love affair. Being touching and romantic person, Eva still examines all situations that might happen to any immigrant as difficulties to find a job without education and concern with her sibling. The girls like Eva tend to go straight to reach goals unlike Marisol (Daniela Schmidt), who has to live with her siblings at the pension. She makes friends with Eva and Alicia, and though she says she is a singer at the night club and, thus, she has lots of money and gifts from visitors, she does the things she is not willing to do as a kind and fair girl. Working as a dancer at the cabaret belonging to Damian, she is forced to prostitute. She is worth a better life, though.

Lupita Ferrer as Justa Valdéz is the only big celebrity, a legendary Venezuelan Queen of soap operas, to appear in Eva Luna. Also such reputed Mexican actors as Susana Dosamantes and Jorge Lavat as Marcela and Julio Arismendi, respectively, the owners of the largest advertising agency that employs Eva as an assistant. Arismendi is married just for the status of the married person and he adds the element of the detective intrigue to the whole history. (Eva Luna – Telenovela)

Marcela symbolizes evil though she is not the only villain. There are more cruel bandits as “Gallo” (Franklin Virguez), Tony and Renata (Ana Silvetti), sinister housekeeper to Arismendi. Most serious problems and obstacles are created by the Arismendi family members who flout at poor Eva. Julián Gil as Leonardo Arismendi is the major villain in this story. Being a son to Marcela from her first marriage, he lives as a king at the expense of his father-in-law, Julio Arismendi, being an arrogant, irresponsible womanizer. He is a gambler.

Once he takes a sports car from Daniel and driving at the full speed he runs across Eva’s father, Ismael. He escapes but the feeling of shame and penance provokes nightmares. He is a lover of light relations and believes Eva will belong to him. He even bets with Daniel to have sex with her. And exactly for this reason he offers a job to her at his place not even suspecting she is a daughter to the person he killed accidentally. However, he is seized with her beauty though his sister Victoria (Vanessa Villela) wants to disturb his plans. Victoria is an official girlfriend to Daniel but she does not love him.

The telenovel Eva Luna is made in all genres as romance, drama and even comedy symbolized in the driver Daniel (Harry Geithner). Eva Luna is broadcast at the daytime at Caracol Television from Thursday February 10 after the TV series “El clon” (Clones). Made in the HD format, this telenovel was greatly accepted in Puerto Rico and the United States of America. The translation rights were acquired by Nicaragua, Salvador, Ecuador, Chili, Honduras and Columbia.

READ ALSO:  We are family / Somos familia telenovela full story
Get More Customers and Grow Your Business. Advertise Your Business for Free on Ghana Businesss 🙂