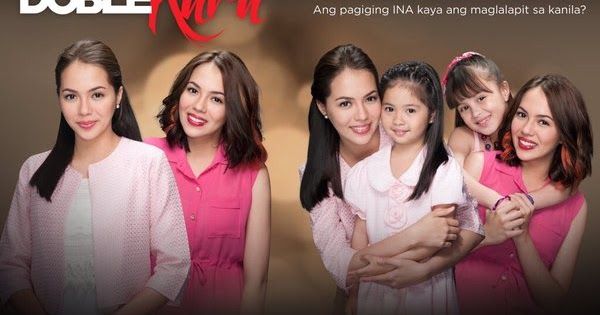 The first book, which spans three seasons, focuses on the life of Kara and Sara and how jealousy and identity test their sisterhood, and how they are exposed to various revenge plans by Lucille. The second book is about Kara and her husband, Sebastian Acosta, starting a new life together, while Sara begins life again in Japan. The twins both have daughters, Isabella and Rebecca. Until twists changed then when Rebecca died and Sara returned to the Philippines and unexpectedly, a suspect ruins her relationship with Kara after the suspect kidnaps Isabella and gives her to Sara. As the truth blooms, their sisterhood is more than tested competing as the mother of Isabella. Not knowing who is manipulating them, there is only one person who tries to ruin their family, their sister-in-law, Alex, Seb’s sister.

Doble Kara began with the story of a poverty-stricken Laura (Mylene Dizon) who had no means of acquiring money for her dying mother Esme’s (Irma Adlawan) medical treatment. Laura, who had no choice but resort to prostitution, was impregnated by a married man named Antonio Dela Rosa (Allen Dizon). Despite what happened, Ishmael (Ariel Rivera) who has shown Laura true love, marries her, and steps in as the father of her two unborn children. On the same day of Laura’s childbearing, Lucille (Carmina Villarroel), Antonio’s wife, too, also gives birth to their child, Sofia. However, the couple’s daughter died shortly after delivery in consequence of her premature birth.

As Antonio and Lucille mourn their daughter’s early passing, Laura and Ishmael, together with godmother Itoy (John Lapus) and his brother Andy (Harvey Bautista/Anjo Damiles) enjoyed and lived a happy life with their twin daughters, Kara and Sara (Avery Balasbas), regardless of being poor. The twins’ differences become apparent when Kara excels in academics while Sara struggles, thus made Sara switch identities with Kara to make her pass her academics. However, when Kara was diagnosed with leukemia, Sara became jealous of the extra attention that was given to her sister. With limited means, their parents were forced to separate the two and give up Kara to her biological father Antonio, who had the means to provide better treatment for her disease. With Kara finally aware of her true origins, Laura and Ishmael decided to keep their secret from Antonio, in fear of losing Sara as well. Doble Kara / Double Kara Philippine drama series Full Story

Antonio brings Kara unto the Dela Rosa Foundation where she meets Lucille. Disheartened by Kara’s ailment, Lucille began to espouse a mother-daughter relationship with Kara as she began to consider her as a her own daughter with the previous loss of Sofia. Unbeknownst to her of the existing relationship between her husband and Kara, Lucille adopts and brings Kara abroad where she recovers from her illness.

The two siblings, despite sharing the same appearance, grew up living two separate lives and contrasting personalities. Sara, who has an extreme fondness of beauty contests and pageants, grew up ambitiously towards her own life and dream, becoming more self-centered and egoistic while fostering a street-smart attitude. While Kara grew up to be charming, sweet, mellow, very sophisticated, and artistically inclined.

After fourteen years had passed, a grown-up Kara (Julia Montes) returns to her hometown and, against her father’s wishes, resolves to find her family. On the other hand, unaware of her sister’s whereabouts, Sara (Julia Montes) continued to pursue her dream of becoming rich and famous, and meets Edward (Edgar Allan Guzman). The two became a sweet couple but as days test their relationship, they stop themselves in impoverishment so they broke up and remained friends. In the meantime, after several attempts,

Kara had finally succeeded to meet her twin sister Sara in one of Edward’s concert. Kara pleaded with Sara not to tell their parents yet of her return in order to avoid further complications in her family. Amidst of these, Laura and Ishmael soon discovered of Kara’s presence when Kara worriedly visited her mother who got admitted in a hospital because of ulcer and when Ishmael got victimized in a taxi hold-up. Doble Kara / Double Kara Philippine drama series Full Story

Several situations had occurred in keeping Kara and Antonio’s secret including Sara who got mistaken for as Kara by Lucille and Antonio. This accidental switching of identities later gave Sara the acquisitiveness to share Kara’s luxurious life, much to Kara’s detriment. Meanwhile, Sara’s jealousy towards Kara heightens as she unraveled her true origins – kept hidden by her own parents and sister. Now aware of her true identity, Sara started to yearn for Antonio’s affections and used her sister’s identity to get closer to her real father, but eventually the truth was revealed to Antonio that he actually shared twins with Laura. Doble Kara / Double Kara Philippine drama series Full Story