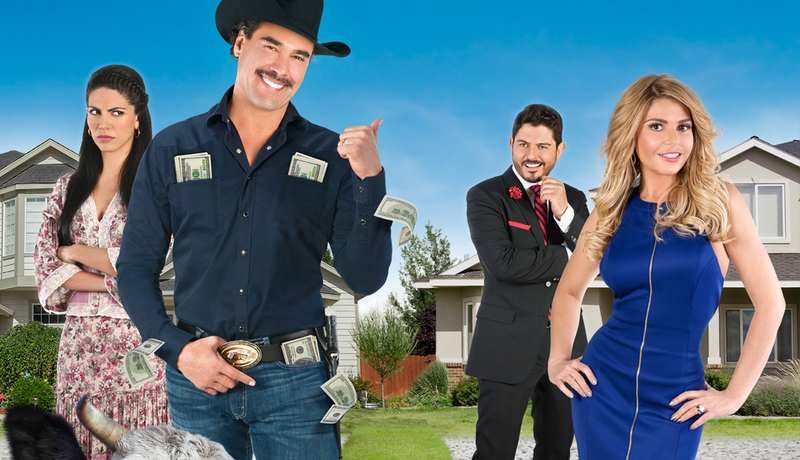 Itatí Cantoral, Eduardo Yáñez, Ernesto Laguardia and África Zavala star as the protagonists, while Nora Salinas and Harry Geithner star as the antagonists.

Fooled into Love telenovela / Amores con trampa follows the life of a rural family that moves to the capital after having sold their Ranch.

Alejandra has gone missing and Isabel asks her husband to find her no matter what. Meanwhile, Maria tells Facundo about the scandal Isabel made in the boutique.

Maria tells Rocio she feels bad for what happened to her uncle. Elsewhere, Esteban threatens Isabel with revealing her secret if she doesn’t go to his apartment.

Wednesday 3 January 2018
Episode 62
Facundo arrives at Esteban’s apartment when he tries to kiss Isabel who tells him that she loves him, but Facundo replies that his only love is Maria.

Isabel assures Santiago they’ll continue together as a family. All the guests from Saint Bartolo arrive at Facundo and Maria’s party.

Monday 8 January 2018
Episode 65
Santiago finds the furniture that was stolen from him. Elsewhere, Alberto confirms to Rocio that Hilda put something in her drink to make her stop loving him.

Facundo is angry because a former admirer of his wife’s has been calling her house. Meanwhile, Alberto suspects his mother is behind Rocio’s decision.

A reporter takes pictures of the Carmona family during the opening of Maria’s boutique. Meanwhile, Diego invites Carmen to go on a special date.

Isabel demands that her husband tells her in front of Mireya and Estefany who the other woman in his life is. Meanwhile, Maria makes plans for the boutique.

Maria confesses to Perpetua that she’s decided to go back to the country with the children. Later, Santiago arrives with Archie to evict Estefany from the apartment.

Esteban wants Santiago and Mireya to send his wife to an asylum for the insane. Elsewhere, Santiago calls on Facundo’s office with packets of false bills to pay his debt.

Estefany arrives to live to the Carmonas house. Meanwhile, Maria confesses her husband she saw Florencio and tells him she’s fed up with him telling her what to do.

Estefany has decided not to be alone and sets her sights on Santiago, Esteban, or Facundo, although she pretends to be Maria’s friend.

Maria finds out her husband didn’t come home because he fell asleep at the office. Meanwhile, Diego is annoyed to find Cármen speaking with Felipe.

Esquivel alerts Facundo that there is a plot to kidnap Maria. Meanwhile, Isabel wants to know where her husband has been all afternoon, but he lies to her face.

Alberto assures Rocio they’ll marry in less than a month. Elsewhere, Isabel tries to seduce Santiago, but thinks that he’s going to regret cheating on her.

Florencio writes a letter to Maria which Hilda de las Mercedes delivers to her. Her first intention is to return it to him, but curiosity gets the better of her.

Mireya informs Santiago that she’s married to Esteban. Rocio confronts Isabel and asks her to speak with Alejandra.

Isabel promises Mireya not to denounce her for malpractice if she stops seeing Santiago, Mireya agrees.

Isabel goes looking for Maria to her house to tell her she won’t mess with her husband anymore.

Facundo says that Carmen cannot go out with Felipe, Alberto pretends that he is taking her to the movies and they both sneak out.

Santiago asks Rocio if she’s sure she wants to get married to Beto. Hilda finds out about Beto’s wedding and is determined to stop it.

Rocio and Alberto are about to sign their marriage certificate when Isabel and Facundo walk in and stop them. Elsewhere, Esteban threatens Mireya.

Premiere episodes of Fooled into Love telenovela air on EVA from Mondays to Fridays at 13h00 and the primetime episodes air at 19h00.