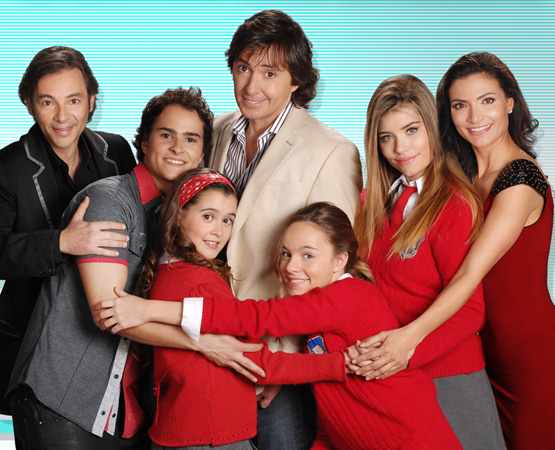 Plot (We are family / Somos familia)

The main characters are Joaquín (Gustavo Bermúdez), a famous businessman, owner of a motorcycle manufacturing plant, and Manuela (Ana María Orozco), his maid. After the death of his friend Sergio Miranda and his wife in an airplane crash, Joaquín became the legal guardian of Miranda’s four orphans. One of these orphans is Pilar Miranda, who is really the daughter of Manuela. Manuela had gotten pregnant at the age of 15 and had to give up her newborn daughter for adoption; years later, she became a journalist and began searching for her child. Upon discovering that Pilar had been adopted by the Mirandas, she took a job as a maid in their home. Upon the Mirandas’ deaths, she came along with the children to work for Joaquín. To avoid revealing her true identity, she works under the assumed name of “Ramona”.

Premise (We are family / Somos familia)

Somos familia is a traditional telenovela aimed at all age groups. The plot has similarities with Grande, pá!, one of Telefe’s successful telenovelas of the 1990s. Bermúdez plays a traditional telenovela gentleman, seducing the female spectators with romance rather than physical appearance. Although the program is mainly a drama, it includes some comedy scenes, most of them played by actor Fabián Vena. Vena plays a Bon Vivant, similar to the Argentine comic book character Isidoro Cañones.[1]

READ ALSO:  The Top 12 telenovelas that every Ghanaian was crazy about

Production (We are family / Somos familia)

ZEE WORLD &#8211; LIES OF THE HEART FULL STORY AND TEASERS

Somos familia is produced by Quique Estevanez, who previously produced the successful telenovela Dulce amor, also aired by Telefe.[1] It is written by Marcelo Nacci and Laura Barneix. The closing credits of the first episodes did not mention Nacci and Barneix, which sparked criticism from author unions such as Argentores and the Asociación de Autores Audiovisuales. Argentores even sent a legal document requiring the correction of the closing credits.[2] As the problem continued, Argentores sent two more legal documents on February 6.[3]

The theme song, “Somos familia“, was composed by Argentine artist Thian, who writes theme songs for TV programs, and performed by Spanish artist Álex Ubago.[4] The song was produced in Spain in June 2013 by Rubén Caballero. The song also features Ricardo Urbina on drums, Joseba San Sebastián on bass, Rubén Caballero on guitar, Txus Aranburu on keyboard, and Laura Latienda in the chorus. The program was first aired during Ubago’s 2014 tour in Argentina.[4]

Reception (We are family / Somos familia)

The program, which had been awaited for months, was aired when the telenovela Solamente Vos at Channel 13 was nearing its end. Somos familia garnered a higher rating.[5]

Cast (We are family / Somos familia)