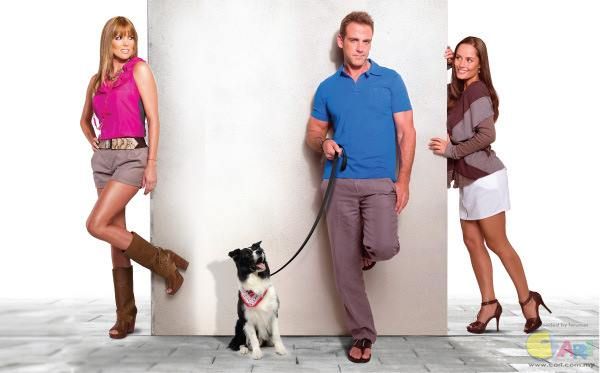 Cruel Love / Perro Amor Telenovela Full Story – The action takes place in Miami, Florida. Cruel Love / Perro Amor Telenovela tells the story of two lovers: Antonio “el perro” Brando (Carlos Ponce) and Camila Brando (Maritza Rodríguez), who are also cousins. Since they were teens they have been playing at love. Now they are two lovers trying to live a life full of adventure, passion, conquests and bets. Anything Goes: making love in a window in the bathroom of their office, or on Camilla’s bed. All under one condition: no love between them, nor for anyone else. Love is a game, and the one who falls in love loses. Antonio is all set to marry Daniela (Maritza Bustamante), the daughter of his father’s business partner. But on their wedding day Camila makes him one of her famous bets: he wouldn’t dare leave the bride at the altar. Antonio accepts the bet and goes through with it, refusing to say “I do” regardless of the likely consequences: Daniela’s dad is the largest investor in the Brando family’s construction company. Antonio’s offensive behavior jeopardizes an important development project in which the Brando family’s fortune is tied up, leaving the Brandos on the brink of bankruptcy. Also, on the day of the wedding, while preparing for the wedding (and after making love to Camila), he spots Sofia (Ana Lucía Domínguez), through the window, whose mother is the caterer for the wedding and Sofia her assistant (Cruel Love / Perro Amor Telenovela)

Parallel to this, the cash-pressed Brando family business deceives and defrauds Dagoberto (Gerardo Riveron), who represents a group of poor homeowners, who are said to benefit from the project that Daniela’s father is investing in, but the Brandos, (notably Camila and her husband Gonzalo (Rodrigo de la Rosa) as the other members of the family are not familiar with the real master plan, as Camila is the head of the project), take possession of the houses in the neighborhood and then refuse to pay for them. This drives Dagoberto to take his own life rather than face the neighbors who trusted him. His son, Rocky (Khotan Fernández) swears revenge. Rocky is an honest young man who dreams of being a musician, a promising pop singer who is in love with Sofia, offering her a sincere love without lies or bets. But Antonio and Camila have gone too far, regardless of Sofia. The economic future of the construction company is at stake, along with a whole neighborhood, a family and the happiness of Rocky. But something will change: Antonio’s father, Pedro (Victor Camara), puts Antonio out on the street for being irresponsible. Antonio decides to marry Sofia and show his father that has matured, but Sofia already knows what he is, and does not want to have anything to do with him.

READ ALSO:  What Life Took From Me Telenovela (Get Full Story)

Camila, meanwhile, tries to recover Antonio by making life impossible for both him and Sofia, without acknowledging she is in love with him. Meanwhile, behind the scenes it’s discovered by some, that Camila is NOT a Brando after all, and that her mother and “father” were just friends, as her “father” was in reality gay. Her biological father is a man named Luigi Dorado, who was a drifter who mostly would take advantage of women, and be a “playboy” of sorts. He was hidden for 30 years, despite apparently knowing the truth, blackmails her with money demands in return of his silence. At the same time, Luigi begins to have a relationship with Cecilia (Zully Montero), Antonio’s grandmother, and matriarch of the Brando family, but this relationship was mostly as a ploy to scare Camila, to avoid telling Cecilia the truth of Camila’s paternity. (Although, later in the novel, its revealed that Cecilia knew all along that her son wasn’t Camila’s father). Cecilia, suspecting that Luigi’s intentions weren’t genuine, asks Rosario (Sofia’s mother and daughter of Cecilia’s best friend Ligia) to act as a decoy, to try to find out what Luigi is up to. But, the plan gets exposed by Luigi, and he attempts to rape her, before police arrive.

Luigi was sentenced to jail for the attempted rape, and Camilla, tired of Luigi’s blackmails, decides to have him killed. As a result, he was attacked by Alejandro Vallejo, a fellow prisoner, who was contracted by Jairo Chaparro in exchange for his freedom. In the end, Luigi wasn’t killed, though injured, and Chaparro never intended to free Vallejo, and used him for his “dirty work”. Later on, Camilla unsuccessful with the plot to kill Luigi, pays for Luigi’s bail, in hopes that he forgives and forgets about everything that transpired. Around the same time, Antonio realizes he truly is in love with Sofia, and he no longer wants to have a relationship with Camilla, or any relationship with anyone else so he decides to go to counseling for his sex addiction. Six months pass, Sofia is ready to deliver her child (with Antonio), and Antonio returns from rehab and is seemingly cured from his addiction and is ready to be the model father and husband that Sofia dreamed he would be. But, Sofia has grown tired of Antonio’s past antics and is determined to divorce him.

But Nany comes back in town and discovers she has AIDS, causing a big problem as Antonio was one of her many partners. After a slight scare, and after several blood tests, it’s discovered that everyone (Antonio, Gonzalo, Daniela, and Tamayo) is negative. (Camilla claims to be positive but that was just a plot to get Gonzalo closer to her, after he seemed to falling for Daniela). Camila and Gonzalo realize that their scheming is catching up to them, so as a result they plan one final big heist, by selling multiple properties twice, and defrauding every 2nd buyer (being that the first buyer would be the legitimate buyer, and everyone after that, invalid) and keeping the money. But, the plot is exposed, as a result Gonzalo winds up in jail and Camila is kept free, after she put the blame of the fraud all on him, when it reality it was more her idea, and he was just an accomplice.

While Gonzalo is in jail, Camila, now working alone, enlists the help of Chaparro once again. Chaparro decides they need to put all the fraud money that Camila and Gonzalo embezzled and put it into a bank account in the Bahamas, under a fake name, the fake name being “Alejandro Vallejo”, the same prisoner who he promised earlier to release from jail, and didn’t. A problem arises, when the prisoner finds this information out, and blackmails Chaparro, as a result Chaparro calls for Vallejo’s death, making it look like a suicide. Gonzalo who had just been in the room with Vallejo, realizes that it wasn’t a suicide after all, and that he was ordered to be killed.

At the same time, Luigi, who has since struck a legitimate relationship with Clemencia (Antonio’s mother and Pedro’s estranged wife) realizes that Camila may be the real criminal of everything that’s going on. The day Vallejo is murdered, Luigi visits the prison and talks to Vallejo, and Vallejo tells him everything he knows, and that if he’s killed, it’s Chaparro’s doing (Vallejo himself was asked to kill Luigi earlier in the telenovela; he was fully aware of what Chaparro was capable of) and wrote on a piece of paper the proof that Chaparro is behind the money laundering scheme.

Also, in the past few months, Rocky Paris lets his fame go to his head, and he becomes arrogant to everyone he’s dealt with in his life, only wanting two things: (1) revenge on the Brandos for his father’s suicide (which in reality was Camila and Jairo Chaparro’s doing) and (2) Sofia. Because, of this tired of Rocky’s attitude, Benny quits the band. Antonio, realizing Sofia doesn’t want to be with him, and refusing to go back to Sofia, meets and falls in love with a veterinarian called Miranda (Angelica Celaya). Sofia also gives in to Rocky’s advances and falls in love then later agrees to marry him. Also around this time, Cecilia is suffering from heart disease and is in need for a transplant, this results in Sofia and Pedro to run the company trying to undo the bad deeds of Camila and Gonzalo.Cruel Love / Perro Amor Telenovela

Gonzalo later turning face by exposing Camila and Jairo’s plan. When Camila gets word of the developments, she decides she needs to kill Cecilia in the hospital, and nearly succeeds, but is saved by both Antonio and Miranda, only to now need the heart transplant more urgent. Luigi, knowing all the truths, is ready to kill Jairo for all the misdeeds he committed, and it culminates into a shootout, where Luigi is killed. Luigi turns out to be an organ donor and his heart is given to Cecilia. Cecilia fully recovers and is now ready for a new plan to save her company and resolve the issues of the poor homeowners. Camila and Jairo team up again to kidnap Sofia’s baby and escape from the country. When the police are about to trap her, Camila commits suicide by shooting herself on a boat. Antonio and Sofia get married.