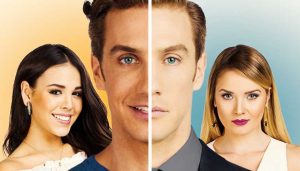 If Only I Were You Telemundo Telenovela Full Story – The unlikely meeting of two men changes their lives forever, for better and for worse, in the brand new telenovela “If Only I Were You”. The telenovela will premiere exclusively on Telemundo – DStv channel 118 on Monday May 23rd at 4:20pm CAT. “If Only I Were You” poses the intriguing question: what if it was possible to live the life of another? The dashing Eugenio Siller (of Queen of Hearts fame) stars as both Pedro “Perico” Pérez and Leonardo Fuentemayor, two men who just so happen to look exactly alike, but whose lifestyles couldn’t be further apart.

Happy-go-lucky Perico is honest, hardworking, cheerful and the quintessential ladies’ man, or so he likes to think. Leonardo, on the other hand, is a self-made man who’s worked hard for his millions, mansion and wife-to-be, the beautiful and mysterious Fernanda Manrique (Kimberly Dos Ramos). Thanks to an unfortunate set of events, they now live one another’s lives, with both their families completely unaware that Perico and Leonardo have switched places.

At first, the shocking revelation of their new lives makes it difficult for them, but they soon begin to acclimatise. In spite of losing his money and status, Leonardo finds himself falling for Paloma, the love of Perico’s life. Is Leonardo willing to give up everything for this one-of-a-kind woman? For Perico, Leonardo’s family, fiancée, money and power are too good to be true, and he’s loving every second of it. That is, until he finds out what Leonardo has in store for Paloma.

Hilarity and drama ensue as the two men meet their new families, like Leonardo’s new mother, Inés (Laura Flores) – a remarkable woman who just so happens to be having an affair with Pedro’s best friend. Then there’s the attentive, witty and, above all, loyal Basilio (Carlos Espejel) – a man who Pedro grows to learn and respect as a sincere friend.

Ultimately, as each one learns the pros and cons to the other’s life, in this charming tale about the pursuit of happiness, the lines begin to blur. Can Perico and Leonardo find their way back to their own lives? And will they want to? Catch this captivating blend of comedy, romance and, of course, drama in If Only I Were You, every Monday at 4:20pm from May 23rd; only on Telemundo (DStv channel 118).