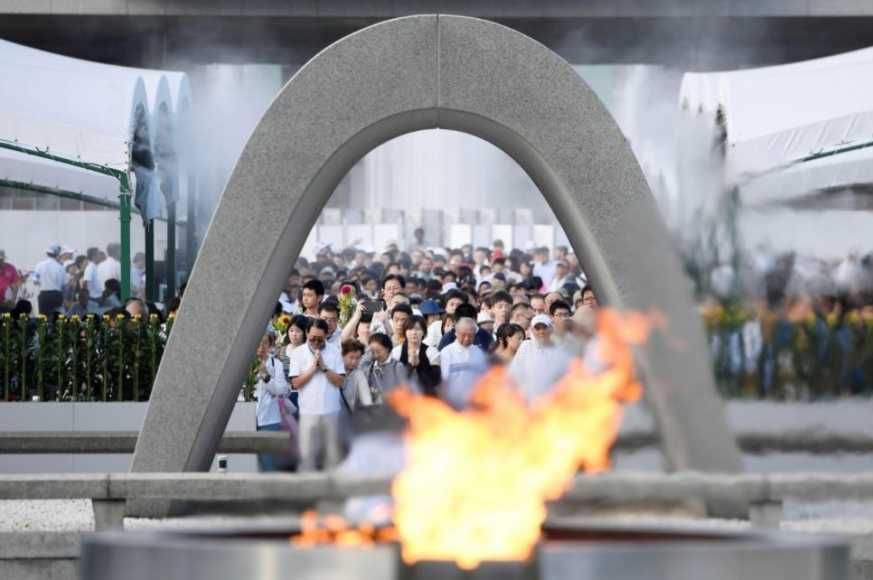 Hiroshima & Nagasaki: 6 Quick Facts About The Historical Tragedies – Though both countries have become allies at this time to fight North Korea, Japan may never forget the Hiroshima and the Nagasaki atomic bombings that destroyed thousands of lives, cities and ruined their natural environment.

In 1945, the United States dropped nuclear weapons on the Japanese cities of Hiroshima and Nagasaki on August 6 and 9 respectively.

Marking the 72 years anniversary of the tragic incidence, Japanese Prime Minister, Shinzo Abe has called for “a world free of nuclear weapons”. He also pledged commitment towards world peace.

The event took place at Peace Memorial Park, near Hiroshima’s ground zero. Report says the event which held on the 6th on August was attended by 50,000 people and representatives from 80 nations and the EU.

As the North Korean tension increases with the Guam threat, today coincidentally marks the atomic bombing of Nagasaki decades ago.

2 years ago, survivor Sumiteru Taniguchi his horrifying tale, saying his skin hung “like rags from his arms and back.”

These are 6 quick facts about the Hiroshima and Nagasaki bombing: The world war ended a few days after the Hiroshima and Nagasaki attack. It was also seen as part of the Pacific war which Japan literally started.

By the end of 1941, Japan pervaded Thailand and attacked United States military bases in Hawaii, Wake Island, Guam and the Philippines. Coupled with their refusal to surrender to the Potsdam Declaration demands, US retaliated with the atomic bombs. It was after this that Japan surrendered.

2. Decimated Thousands In The Twinkle Of An Eye The bombs detonated about 1,900 feet (600 metres) above the ground. Report says that about 70, 000 people were instantly killed while thousands more died from the after-effects of the radiation.

Tokyo, Japan’s capital only caught wind of the attack about 3 hours later. For the Hiroshima attack, the atomic bomb made of Uranium was used. It is referred to as the “little boy”. 3 days later another atomic bomb was unleashed on Nagasaki. This was considered more powerful than little boy, thus called the “Fat man”.

4 months after the attacks, 90, 000 – 146, 000 people in Hiroshima and 39, 000 – 80, 000 in Nagasaki died from the dangerous chemical effects. Subsequently there were increased cases of mental retardation, cancers, keloids, genetic mutations, health complications and all forms of disability.

3. This Was The Only Time A Nuclear Weapon Was Used For Warfare In History

4. Only One Man Survived Both Attacks While there were survivors of the separate attacks, only one man was said to have survived both bombings. Tsutomi Yamaguchi narrowly escaped the Hiroshima blasting. In search of refuge he fled to Nagasaki where he witnessed the next attack. Yamaguchi died of stomach cancer in 2010.

5. The Flower Of Hope 6. History May Repeat Itself

With the war of words and provocative acts, the world fears that the slightest violent move from either north korea or the US may repeat the Hiroshima & Nagasaki tragedy. Ever since the 72 year old attack, the U.S. has reportedly built 4,680 nuclear bombers.

“It is a harnessing of the basic power of the universe. The force from which the sun draws its power has been loosed against those who brought war to the Far East,”

“If they do not now accept our terms they may expect a rain of ruin from the air, the like of which has never been seen on this earth.”

Trump’s latest message to North Korea over the Guam threat:

“North Korea best not make any more threats to the United States. They will be met with fire and fury like the world has never seen.”

READ ALSO:  Who Do You Think You Are? Your Perception Creates Your Reality